pointed out how the graduating class set the expectation for FFA students in years to come.

“We have absolutely worn them out physically, mentally and emotionally to lay the groundwork for our sophomores now,” Parr emphasized. “If you’re showing an animal, you better be like Katelyn Caldwell, trying to win all over the state and country. If you’re going to do leadership development and career development, you need to be like Lauren Provost — be top 10 and try to win a state contest. If you’re going to do shop stuff, you need to aim to be like Harrison Van Cleve, and Campbell Rodgers and let’s go big or go home.”

Senior Lauren Provost, who has served as chapter president for the past two years remembers the exhausting days drafting bylaws and a constitution. She was also the first vice president of the Navarro and Ellis County district chapter.

Through her involvement in the FFA, leadership, public relations, bull judging, and speaking were her go-to activities, and she showed pigs for two years.

“I think being an officer and one of the people who chartered the entire chapter, you have a unique perspective because you saw it from ground zero,” Provost reflected. “I honestly couldn’t be more proud of not necessarily myself for what I helped start but the kids that go through it.”

She added, “I saw my personal growth through the program, but I also get to step back as a senior and watch kids fall in my footsteps. It feels really great.”

Through her experiences, she learned that it is okay to not succeed in everything she tried. She also emphasized the importance of respecting other and working diligently with everything.

Provost is finishing her associates at Navarro College and plans to attend the University of Texas A&M to study agriculture communications.

Another key player in the chartering process was senior Katelyn Caldwell.

“It’s grown so much from the very beginning,” said Caldwell looking back. “We went through countless hours trying to get the charter, building our chapter and getting officer meetings together so we could improve the chapter. It’s grown a lot.”

Through her participation, Caldwell has represented Heritage across Texas and the nation. She traveled her entire senior year showing lambs and earning banners at Belt Buck Bonanza in Waco, Heart of Texas Fair in Waco, Ellis County Youth Expo, San Antonio, and Phoenix. She also competed in shows in Kansas City, Missouri, Louisville, Kentucky and Denver, Colorado.

But she also participated in leadership and career development. Dabbling in multiple platforms in FFA, balancing her passions and school was her most significant obstacle.

When reviewing her high school career from her perspective, she learned lessons that made her into the show woman she is today.

“In the past few years, before this year I never put in as much work and tended to take things a little bit for granted. So I’ve definitely learned to not take things for granted but to go all in,” Caldwell stressed.

Caldwell will attend Angelo State University in the fall to pursue a degree in animal science.

“It’s defiantly a good feeling knowing that we started FFA at that school. We were the first ones to walk in there and walk out as a chapter,” Caldwell gleamed. 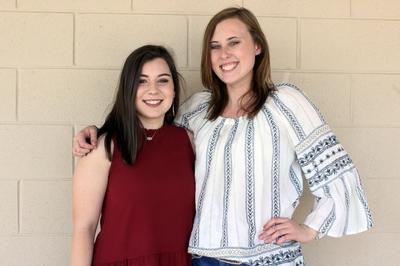 Two students set the bar for the agriculture mechanics aspect of the FFA program — Harrison Van Cleve and Campell Rodgers.

The two have come so far in their mechanical skills, as Parr joked how they could not put together a simple fire pit in the beginning and this year created a 20-foot gooseneck dump trailer.

Ever since VanCleve was a child, he was interested in building things, and for Rodgers, he was raised to work with his hands. The FFA program gave them the challenges advancing their skills, which earned them scholarship money, blue ribbons, and banners.

VanCleve pointed out how at the beginning of their high school FFA journey projects were unexpected and unorganized. Since their freshmen year, funds increased, the variety of tools in the shop grew, and their motivation progressed. This year, Parr worked closely with the guys on time management and business skills.

Rodgers piggybacked agreeing this year was a challenge in itself. Not only were the guys building a complex machine, but also working with a client taught them how to orchestrate the business aspect and how to work with another person’s money. The two proved to overcome the learning curve after working with their sponsor, Kasey Griffin with Rocking G Contracting.

To be in the first class of the initial FFA group to graduate, for VanCleve he recognized the impact the seniors made on the program.

“It’s like we have started a legacy and something that people can look up to and think of like ‘wow, all the stuff they built we’ve got to step our game up to what they did,’” VanCleve iterated.

“It means a lot because we started something and finished really well,” Rodgers added. “We set the bar like Harrison said and the younger kids can look up to and see the pictures of what we started with.”

When wrapping up the founding group of seniors graduating, Parr said he knows the students tackled all aspects of the FFA, career and leadership development, showing and ag mechanics. Parr added how the partnership with Midlothian High School is an asset to their chapter. The two competing schools utilize each other’s resources to deliver their best.

His advice to anyone starting a chapter is, “Be patient. It’s a lot of work and time so going through it you need to have an end-goal in mind of what you want to be four years from now.”

These students’ successes did not come from the first nor their second year in the program, but through the hardship and struggles, they overcame to set the bar for the next round of students.