The worry comes from incidents such as a piece of metal coming off a truck and striking a Midlothian family's car. Nobody was hurt, but it could've been worse.

It was a trip to bible study last week that left the Baldwin family counting their blessings. Coy and Kristina were driving down Highway 287 just before it crosses 360 near the edge of Midlothian into Grand Prairie when they say they saw metal fall off an 18-wheeler.

“The metal fell off the truck and was kicked up underneath the tire,” Kristina recalled. “And it just started coming straight toward me.”

The glass shattered in the windshield and hit Kristina and their 7-week-old baby. Neither were hurt. The metal never fully punctured the windshield for some reason.

“The grace of God,” Coy said. “That's the only thing I can attribute it to. I guess they make windshields better than they used to. I don’t know.”

“Midlothian is a unique environment for truck traffic,” he said. “It is a smaller rural town, but there is an immense amount of industry in this city.”

Vinson says the officers will stop trucks, check their logs, brakes, frames and make sure their loads are secure. He says they have been seeing problems with certain truckloads lately.

“There are a lot of issues with objects, metal objects, chunks of things coming out of the trailers of those vehicles,” the officer said.

The Baldwins’ trip to bible study is one they'll never forget. They're glad the metal piece was small and only hurt their windshield.

“You may think it's just a little bit of something. It's only a little piece of metal,” Coy said. “But it could have been my wife's life.”

Vinson says he responded to a crash a couple of weeks ago where a wheel and axel assembly came off and hit a woman's windshield. She was okay.

Midlothian PD hopes to have the commercial vehicle unit officially up and running within the next 3-4 weeks. 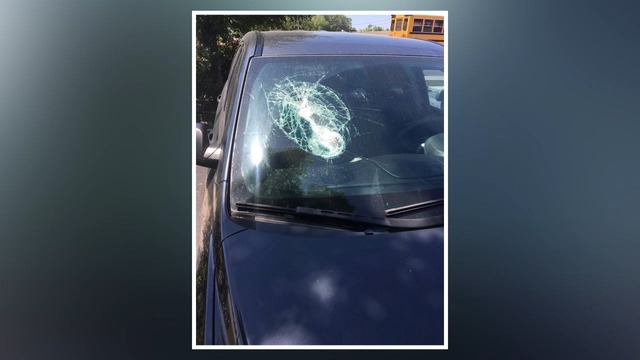