Midlothian teen recovering after being hit by car while riding bike

Midlothian, TX - A 14-year old boy is recovering after being hit by a car while he was riding his bike to football practice this morning.  Police say Midlothian freshman Elijha Smith was on a dark rural road approaching Midlothian Parkway when he was hit from behind by a car going in the same direction.

The driver stopped and called 911.

Police and the boy's family say he is very lucky to walk away from the accident with just a few bumps and bruises. He had an MRI and CT scan, and is staying at a hospital overnight for observation. 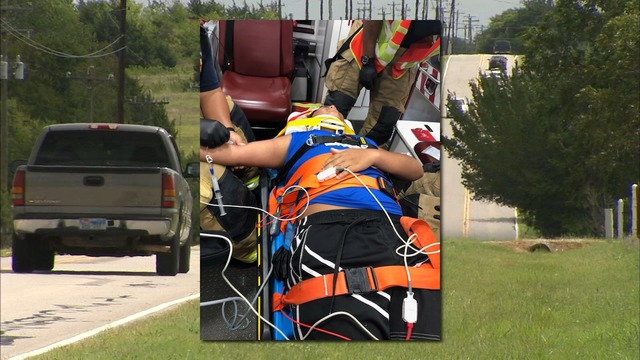 Mom Karen Snape got a knock on her front door just before 6 a.m. It was still dark out, so it took her a moment to realize it was Midlothian police knocking.

“He said, ‘Do you have a son named Elijha?’ and I said, ‘Yes.’ I was speechless then. And I hurried up and put on my shoes and grabbed my keys and just ran out the door,” Snape said.

Elijha was riding his bike the three and a half miles to football practice before school on Mockingbird Lane near Midlothian Parkway. It's something he's done since he was in middle school since his mom works mornings and bussing isn't available.  He didn't get far from home before police say he was hit by a car.

“The gentleman did not see the bicyclist before he came up on him so there was no, he didn't hit the brakes or anything, just hit the individual from behind,” said Midlothian PD Capt. John Spann.

The driver stopped and called 911 and the teen was taken by Careflight to Parkland Hospital in Dallas. Snape says her son is sore and has some cuts, but no broken bones. It’s a blessing, considering the damage to his bike.

“The bike, it doesn't even look like a bike anymore, the front tire flew off the bike,” Snape said.

Police say it was dark at the time of the accident, with very little lighting. Snape says her son's bike has reflectors and he usually wears a construction vest so he's visible to drivers, but forgot it Tuesday morning.

“My son is alive, I'm grateful. But it could've been worse,” Snape said. “Just be careful, you might not think there's any kids around but there will be, you're in a suburb area where there's three schools there in that area.”

Police are investigating the incident as an accident and no charges have been filed.