Midlothian, TX - Embrace Grace is not only pro-life but is also pro-love. That distinction is vital to Nicole Glaab and Shelly Skinner.  A mother to five children, including Glaab, Skinner said she understood the challenges

that came with being a mother and raising a family. Glaab experienced the same thing with her own four children as well.

That’s what lead Glaab to start an Embrace Grace chapter at the Harvest Hill Church in Midlothian in June. Embrace Grace is a national non-profit organization that aims to help women going through a crisis pregnancy at any age, regardless of whether they’re teenagers or young adults. 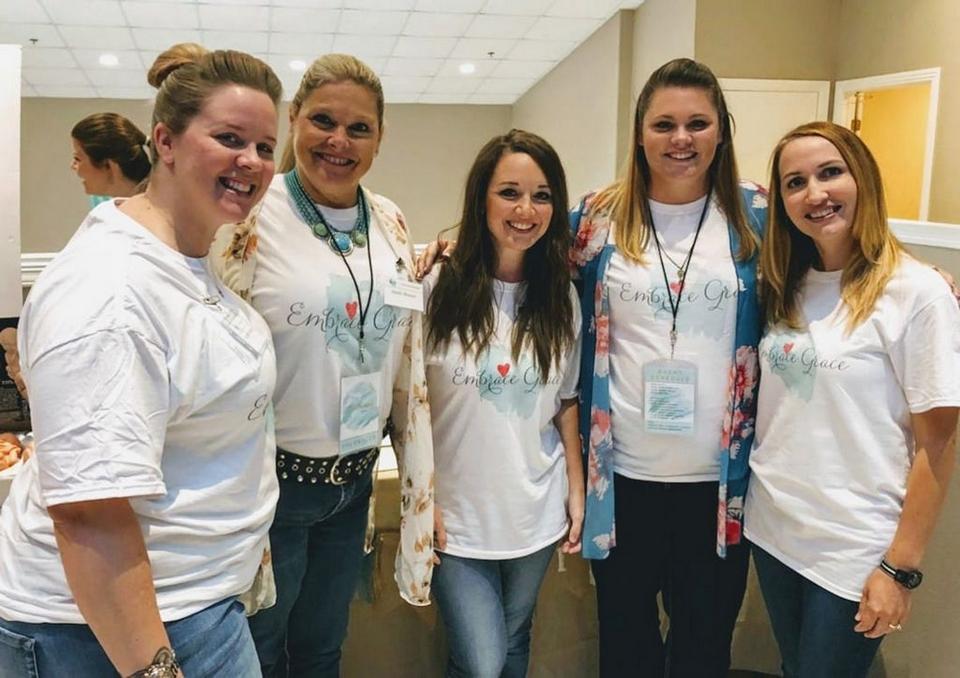 Glaab said their goal as an organization is to not just save the baby’s life, but also the mother’s.

“When you go into the clinics, they don’t want you to abort,” Skinner said. “But after that, there’s nowhere for these girls to go. Nobody to support them. Nobody to teach them things. They need to make sure they don’t end up in that situation again. That’s what we’re trying to do.”

When Skinner was 17 years old, she was unmarried while pregnant with Glaab. She ultimately ended up married to Glaab’s father, but Skinner did not recall it being a joyous occasion.

“I cried on the wedding day,” Skinner said. “That’s usually not a good sign.”

Sure, she later ended up with five beautiful kids and a wonderful husband. But at the time, Skinner said she was panicked and anxious as a new mother.

She said she was just a kid herself. How was she supposed to take care of her own kid on top of that?

Glaab’s experiences were slightly different as a mother. While she was pregnant, Glaab said she got severe post-partum depression and felt like a failure as a mother.

Because of her doubts and depression, Glaab said she closed herself off from people and didn’t want to talk to them.

After her fourth child, Glaab said she finally cracked: she needed to talk to someone and tell them she needed help.

What she found out afterward surprised her.

“The more I talked about it, the more I found out that all these mothers were dealing with the same issues that I was,” she said. “After the girls from Embrace Grace have their baby, we are all still here for them. They don’t have to do this by themselves.”

“The more I looked into it, the more I saw it was structured,” she said. “We actually interact with these girls in a big way, and we get to share our heart with them and listen to them. That’s the biggest thing.”

When young mothers first go through the program, they are provided a love box stuffed with materials to help them in their first steps as a new mother. Among the items included in the love box is a “special gift” postcard, a “Dear Brave Girl” love letter, “A Bump in Life” book, a “best gift ever” onesie and a brave journal, according to the organization’s website.

“There’s so much fear to be young and pregnant, especially when your parents turn their backs on you,” Skinner said. “It’s a scary place to be.”

Since this is the chapter’s first semester, Glaab said they’ve started with two girls going through the 12-week program. According to Embrace Grace’s national statistics, the average range for mothers to go through their program is ages 15-29.

Glaab said the most common ages in their program ranges from 22-24.

“They were in situations that were not ideal,” Glaab explained. “It was a rocky start, only because these girls are looking for help. They don’t know what kind of help; they just know that their situation is not what they want it to be. They need some guidance; they need somebody who will be on their side.”

GETTING WITH THE PROGRAM

With their next semester in the spring, the Midlothian-based Harvest Hill chapter of Embrace Grace has approached the final weeks of their fall semester. While 10 of those weeks take the women through educational classes, Skinner said not all of their programs are based on a curriculum.

For one thing, last week they had a testimonial night, where women came and spoke about their experiences on birth, giving a baby up for adoption and in some cases even going through an abortion.

“We’re all in a different place, and everybody has a different experience with their pregnancies,” Skinner said. “Just having people come in to speak to them, that can change their life just to see what other people have been through.”

They also have a baby shower for mothers involved with the program, where they give 12 presents to the mother for their shower. If the mother chooses to put the baby up for adoption, they are given a “Choosing Life” celebration instead with their own unique list of 12 other gifts.

But Glaab’s favorite part of the program is what she calls a “Princess Day,” where the group crowns the mother and focuses specifically on making her feel special.

“We pamper them,” she said. “We literally set the baby aside, and we focus on you. We do their hair, their makeup, massages, a photo shoot. We feed them this elegant meal where it’s literally a four-course meal. Then they get their own tiara and we crown them that day, to show them that they are the daughter of the king. It’s literally just a day to remind them that this is all about you.”

At any point, the mother may choose to give her child up for adoption. Whatever the mother chooses, Glaab wants them to realize that the women of Embrace Grace are by their side in the choices they believe are best for their child.

“God can take a mess and make it a message,” she said. “He can just turn everything around. That’s what people need to know.”

Even though their chapter is affiliated with the Embrace Grace national organization, Skinner said their expenses come out of their own pocket and they are actively in search for donations and volunteers. To contribute to Embrace Grace, email or .