Midlothian, TX - It has been three months since Grant Kunz returned from his first stem cell treatment in Panama. The 11-year-old was diagnosed with cerebral palsy at birth and had suffered from seizures on a daily basis.

So far, Grant has made exceptional progress and the family is already counting down the days to a second round of treatment at The Stem Cell Institute. 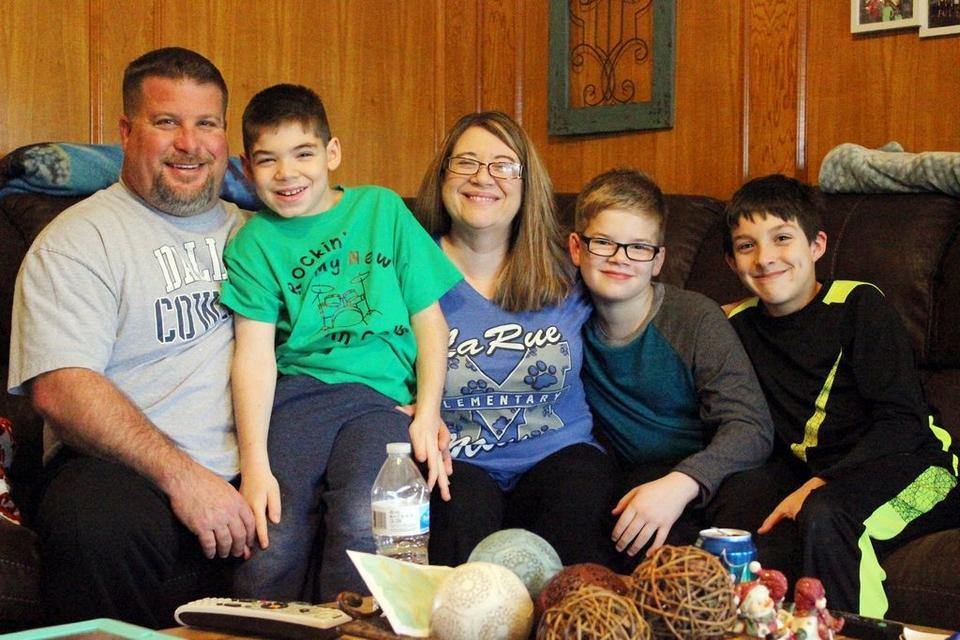 Grant, who has had a vast improvement in motor skills after the initial treatment, has gone from experiencing eight to 12 seizures a day to just a couple a week.

“He’s had maybe 25 at the most since we’ve come back,” said Ryan Witte, Grant’s stepfather.

His mother, Lauren Witte, was skeptical of how the first round of treatment would impact the day-to-day life of her son. For four days, an IV was stuck in Grant’s arm while he received 60 million stem cells that were extracted from donated umbilical cord blood. Once the stem cells were introduced into Grant’s body, they stimulated and repaired damaged nervous tissue in both the brain and spinal cord.

“Some people see a lot of improvement right away, and some people have to go a few times to see anything. It’s been amazing,” said Lauren.

As Lauren spoke, Grant sat between his mother and stepfather on the family’s living room couch. It was the day after Christmas.

Grant pointed at his arm where the IV was administered and said, “It didn’t hurt. The doctor was nice.” With confidence, Grant added, “I wasn’t scared.”

Ryan elaborated on Grant’s braveness, noting the 11-year-old fighter is a Six Flags fanatic and will ride any roller coaster where he meets the height requirement. “Fast and bumpy,” Grant exclaimed.

Once the family returned from Panama, it was back to the normal routine with occupational, physical and speech therapy, as well as therapeutic horseback riding at Campfire Creek in Waxahachie.

All of which has aided in fine and gross motor skills and cognitive abilities progressing in the three months post-treatment.

Grant once routinely experienced tremors in his hands and legs, which are both pretty much nonexistent at the time. Though, he does sometimes feel the shakes when in therapy as he challenges his body. Before the treatment, the shaking prevented him from progressing with fine motor skills. He can now stack plastic cups while balanced on his feet. Another significant accomplishment for Grant is the ability to undress.

Lauren emphasized the significance of these advancements, noting that four years ago Grant could stand up on his own and even take a few independent steps. A series of seizures in March of 2016 then took a drastic toll on his abilities.

“He had over 600 seizures in nine days, and it really took him back,” Lauren said. “We lost all of that, and it was like starting from scratch.”

Two weeks after treatment, Grant is able to once again stand on his own, and can even bend over and pick items up off the floor. Grant is most mobile — mostly on his knees — and continues to strengthen his legs. He had previously utilized a wheelchair and walker for most of his life.

Lauren explained that her son mentally functions at a three- or four-year-old level and the cognitive aspect of his therapy is essential. Ryan noted before the stem cell treatment, it would seem as if Grant would go through the motions; whereas now, he comprehends the material and learns quicker.

Grant has memorized his colors, can recall the plot to a story and follow a set of directions. He continues to learn numbers, the alphabet and spelling his name. These are lessons he has worked on for years and slowly, they are beginning to click in his mind.

While still on the living room couch, Grant was handed a water bottle. He promptly screwed off the lid, took a drink with two hands and was able to seal it shut.

“I want people to see that this really works that this isn’t just shooting at the dark at,” Lauren advocated. “I want to raise awareness for other families so they can be able to get things done because I feel like special needs families have a lot of extra expense and so there isn’t usually a lot of extra resources to go for the things we would like to do for our kids.”

Lauren explained that she wants to raise awareness on the benefits of the treatment so others will be more likely to give and help other families who experience similar situations. In total, Lauren, along with her dedicated volunteer committee of seven, has raised nearly $50,000 to help fund Grant’s medical expenses.

“His mood is more stable. He used to be happy go lucky, and the next second it would be a meltdown. Now, it seems more stable and not as many ups and downs,” Lauren pointed out. She also said his confidence has grown and frustrations with small tasks have dwindled.

“It’s a blessing and a curse. He doesn’t know he’s different,” Lauren said. “He doesn’t have that mentality yet. So I think that’s a good thing, so he doesn’t worry about those things.”

The one negative Lauren and Ryan have noticed post-treatment is that Grant cannot always stay asleep at night. The parents also want to wean him off of his medications. Before Panama, Grant was administered 11 medications a day, five of them for seizures. He still consumes the same amount as of December.

“Mamma’s dream is for him to walk on his own. It’s going to take a lot of work, but I think when we regenerate these cells that we have a really good chance,” Lauren said with optimism. “I’ve been hooked up with parents whose kids went from completely wheelchair bound to walking from going to Panama. So there’s a lot of hope.”

It will still cost the family about $20,000 for the next trip, and about $30,000 has been saved from previous fundraising events. Lauren said another $10,000 needs to be saved to undergo a third round of treatment.

A GoFundMe account is still active, as well as a checking account at Citizens National Bank under “Lauren Witte for the benefit of Grant Kunz.” A donation to this account can be made at any CNB location.