Midlothian, TX - It almost seemed the higher Lacey Sims hoisted her goat’s neck in the sale ring at the Ellis County Youth Expo, the higher the bids rose. And, when the sale went final, Sims was overcome with excitement.

Little did Sims know, however, that a group of local businesswomen had already “scouted” her throughout the week and were even more excited to support her future endeavors.

Sims is a junior at Midlothian High School and received $3,500 for her 95-pound Boer goat that placed second in its class. As she entered the sale ring, Amber Huckabee announced Sims, who has participated in FFA for four years, aspires to become an emergency nurse.

“I’ve always loved animals,” Sims explained after the sale. “When I was little I always asked for horses and goats. I’m like the only person in my family that works with animals.” 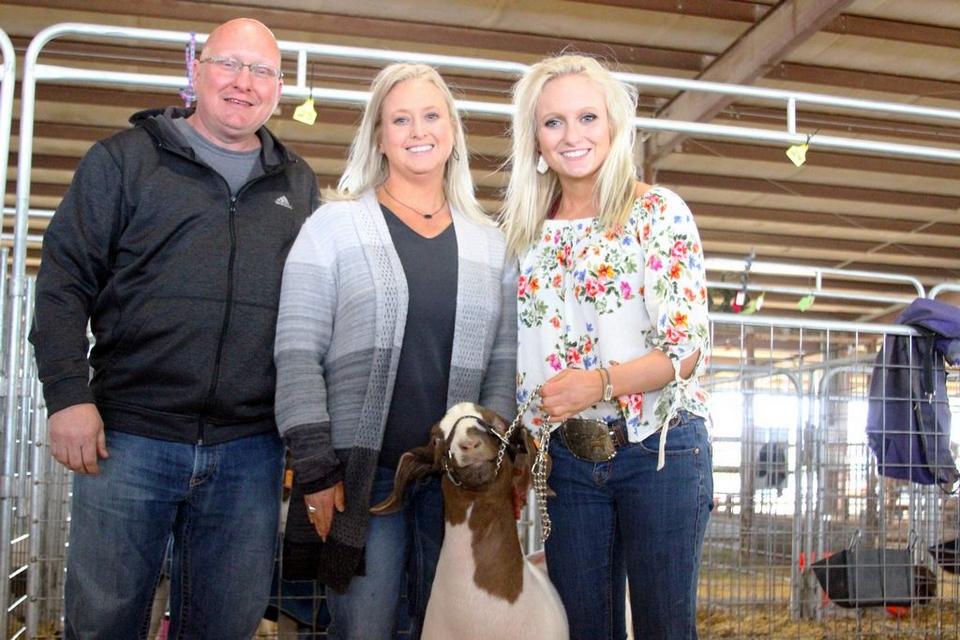 Sims said her time in the FFA has allowed her to learn time management and accountability by caring for another living thing. She has also grown as a person, while the responsibility has taught her to handle stress and pressure.

Sims dedicated at least two hours a day to her goat but still plans to work with humans in her future career.

“I love blood and all that, and I like saving people too,” Sims elaborated. “I like to put other people before myself, so I just feel like it is one of those things where I want to help people.”

Her mother is a labor-and-delivery nurse and Sims said she wants to fulfill the legacy as a student at Tarleton State University.

Sims said to have a local group of women support her was “very empowering. I loved it.”

The Ellis County Women in Business, founded in 2018, was established to strengthen the bonds of local businesswomen. This was the second year for the ECWB to bid on livestock raised by female Ellis County students. Last year, the group focused on pigs with the project, “Bring Home the Bacon.” They then decided to mix things up with this year’s tagline, “All Goats, All Glory.”

ECWB founding member Tara Yarbrough served as the official bidder and spent countless hours throughout the week at the youth expo getting to know the female participants.

“I was there all week, and I was in the back watching for things like, are the girls taking care of their goats or are their parents, are they being kind, are they participating out and about,” Yarbrough explained.

When it came to the sale ring, Yarbrough focused on the females who placed higher and, “We kept going until we were able to out-bid with the funds we had.”

The ECWB contributed a total of $9,000 during the sale and $4,000 on goats that did not make the sale. An additional four scholarships were set aside, each for $1,000.

Yarbrough explained it takes about $1,600 for each student to purchase a goat and feed it along the way. Therefore, it was essential to at least contribute $2,000 to each girl in the sale ring.

The ECWB members also hosted two sessions of goat yoga on March 23. The goats were provided by Cathy Altman, and the lessons were instructed by founding member and vice president of mentoring, Dionne Zschiesche.

Before the goats were shown on Tuesday, members of the organization gathered for a tailgate to socialize with young female participants. This event was organized by founding member Amber Caverly.

The group of women also volunteered at the Bloody Mary bar on sale day Saturday morning and crafted drinks for the buyers.

“It was a hard, powerful reaction to see how hard these girls work and how appreciative they were,” said Altman. “Especially the girls that didn’t make the sale and we went up and offered them $500 and said they could keep the goat, they were just in aw and so appreciative.”