Heroes of Midlothian give back

Midlothian, TX - For the last several years, the Heroes of Midlothian Foundation has fulfilled its professed mission of providing assistance to families of local military and first responders in need.

But sometimes, the foundation steps outside its boundaries to provide help to the community at large.

One such example appeared at a fundraising event on a chilly Veterans Day at Fuzzy’s Taco Shop on George Hopper Drive, where the foundation unveiled a wheelchair-accessible table that was donated and built by foundation members. Members of the Midlothian police and fire departments braved the rare mid-November norther to be present for the table’s installation. 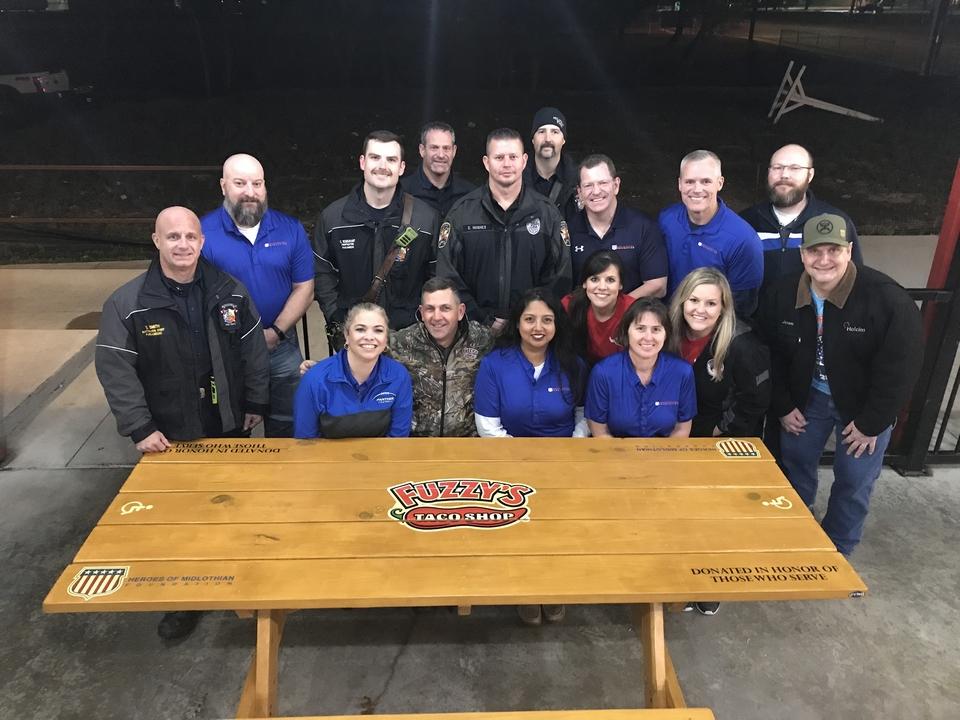 “They were in need of a table that was wheelchair-accessible on the patio,” said Blake Norman, a member of the Heroes of Midlothian board of directors. “And so we made a recommendation and showed them some plans, and they agreed to let us build a table for them.”

The donation was initiated at the request of local resident Chris Daubitz, who mentioned to friends on social media that the patio at Fuzzy’s didn’t have any wheelchair-accessible tables.

Daubitz isn’t a military veteran himself, but the Heroes of Midlothian identified the need and swung into action after getting agreement from local Fuzzy’s franchise owner Eric Walker.

“They didn’t have specific patio seating for wheelchairs,” foundation secretary Stephanie Frankiewicz said. “So we decided to fix that.”

Foundation members built the table by hand, and it matches almost exactly the wood tables on Fuzzy’s patio, with several coats of polyurethane. The table bears the Heroes of Midlothian logo on it and a sign that says, “Dedicated to those who serve.”

Jason Frankiewicz, Stephanie’s husband, detailed other instances in which the Heroes of Midlothian Foundation has extended a helping hand, most recently the Oct. 20 tornado which caused extensive damage to the north and east parts of the city.

“We got a call at 10 o’clock at night ... and we went out here with chainsaws,” Jason Frankiewicz said. “There were 12 people total but probably five of us with the Heroes of Midlothian which helped with that. It’s an outreach which gets involved.”

The Foundation has its origins in the death of Midlothian High graduate Chris Kyle, the “American Sniper” author who was murdered in February 2013 on an Erath County shooting range.

Kyle’s book was made into a movie directed by Clint Eastwood in 2014 that was nominated for multiple Academy Awards and won for Best Sound Editing.