The Midlothian couple, who are already parents to 20-month-old Connor, knew their lives were about to change, but they couldn’t have imagined what has happened since learning they were expecting in July or how their story would affect people across the country. 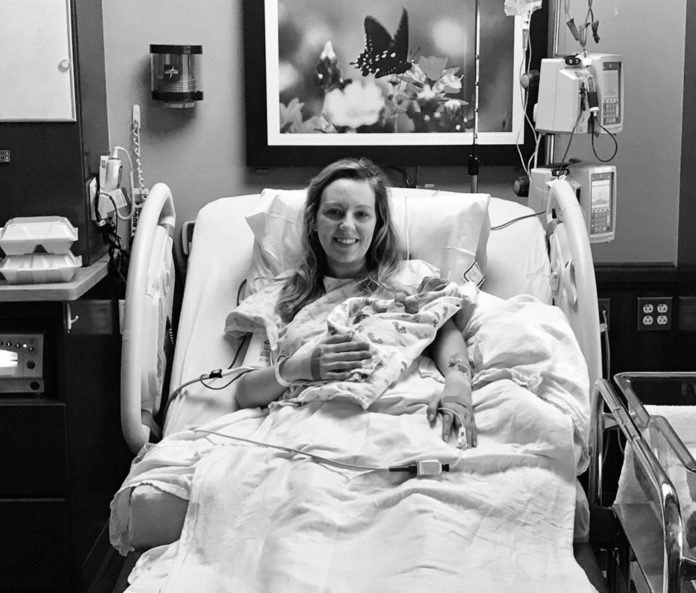 “We found out that they were mono/mono, which means they share one placenta and one amniotic sack, so there is a good chance of the cord getting tangled,” said Brandon Rawlinson, 29, who is a firefighter/paramedic in Hurst. “That’s why ours passed away.”

On Nov. 6, the Rawlinsons went in for their weekly ultrasound with their specialist. At 19 weeks pregnant, Brooke Rawlinson, 28, was feeling good, but both parents were strangely anxious that day.

“The first thing we noticed was they had no heartbeat, they weren’t moving,” Brandon Rawlinson said. “They left us alone for a while. We sat there and cried. We went to the car and called our families. Then we came home, hugged Connor and waited on (obstetrician) Dr. (Jason) Brown to call us to tell us when we would deliver.”

After 21 hours of labor, Audrey Grace and McKenna Reese Rawlinson were born at Baylor Scott & White Medical Center in Waxahachie on Nov. 7.

“We were clueless,” Brooke Rawlinson said. “We didn’t know what would happen once the babies were born. It was so emotional. We just cried. They needed some more time to form.”

The couple got to hold their tiny babies, while the nurses took photos of the newborns with their parents. 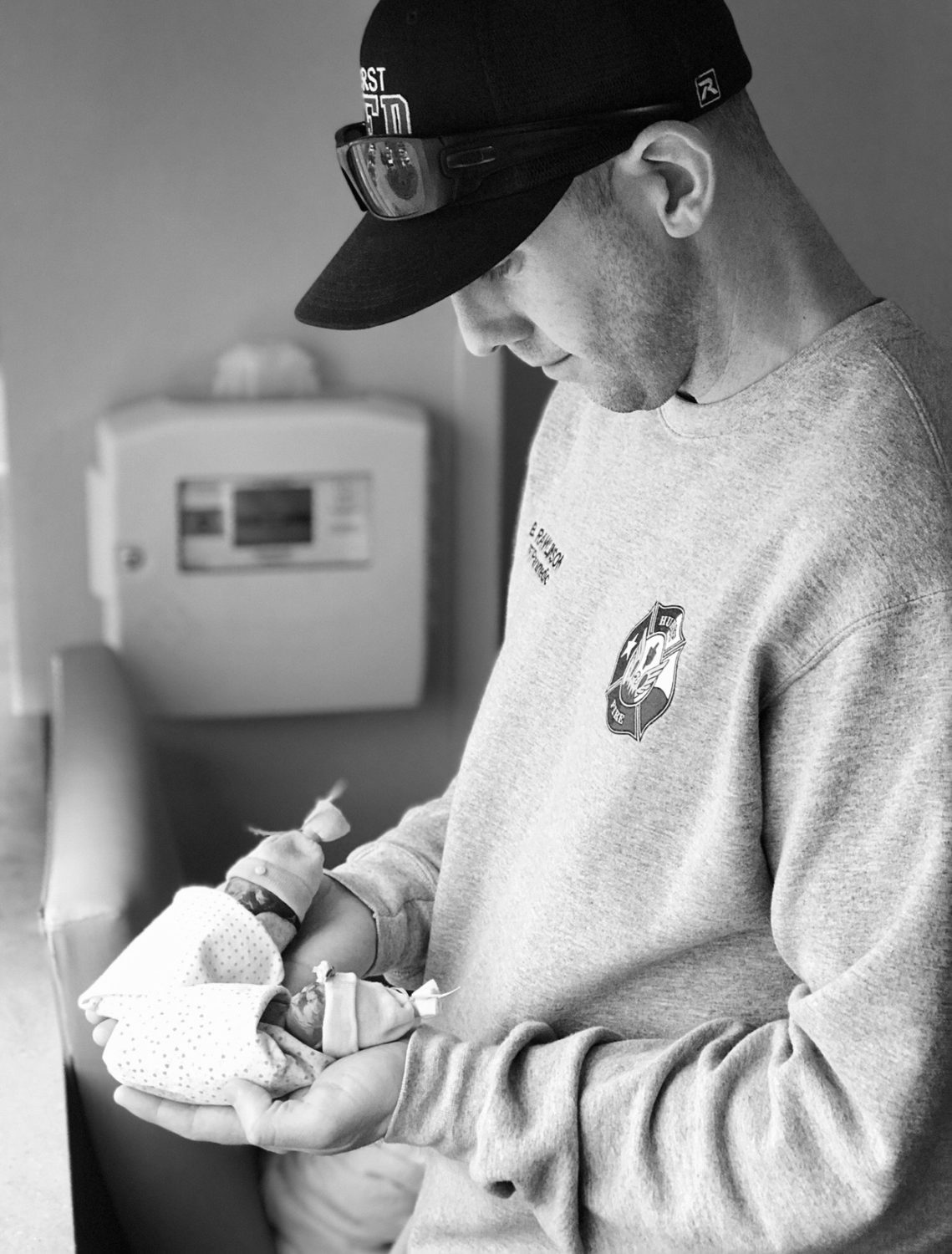 “We talked to the chaplain,” Brandon Rawlinson said. “He said ‘When you’re ready, they can be cremated, which is what we chose, or they can take them to be buried.’ Right after we got out of the hospital, I went to the funeral home to sign the papers. That was on a Friday. They said we could pick them up on Monday.”

Brandon Rawlinson was surprised at how expensive it was to lose their daughters.

“You lose your child, have hospital bills and recovery,” he said. “Urns can cost from $85 to as much as you want to spend.”

Rawlinson, who also owns and operates Rawli’s Furniture, knew his girls had to have a special urn, so he spent the weekend after their birth crafting a maple and Bolivian rosewood box with their names and date of birth laser burned on top.

Brooke Rawlinson said she never knew how common miscarriage and stillbirth was, or how many of her friends and family members had lost children. According to the Center for Disease Control, the death of a fetus before 20 weeks is considered a miscarriage. After 20 weeks, it’s considered a stillbirth. Ten to 20 percent of pregnancies in the United States are miscarried, according to the Mayo Clinic, while 26,000 babies are stillborn each year in the U.S.

The Rawlinsons’ story spread across Facebook with more than 250,000 views, touching many other parent who had lost children.

“I posted and got hundreds of comments, tons of people calling us,” Brandon Rawlinson said. “I said ‘Maybe I can make some boxes for people who need them.’”

Within 24 hours, people had sent in $1,000 in donations to help him create memorial boxes. At press time, he had orders for more than 250 boxes and was preparing to ship out the first batch.

Each box costs $40-$50, including postage, but he is not charging the parents. The Rawlinsons set up the Audrey & McKenna Foundation to cover the cost, with accounts on PayPal and Venmo. The couple has since received $20,000 in donations. Loren Kientz of Berryton, Kansas, was one of hundreds who read the Rawlinsons’ story on Facebook.

“My husband and I were expecting our second child in February of 2020,” she wrote on the Audrey and McKenna Foundation Facebook page. “In August of this year, I went into early labor. We made a trip to the ER and eventually to the birthplace of our local hospital, delivering our daughter Hazel at only 14 weeks. My husband and I were blessed with wonderful nurses to help us get through this process. Our family was also blessed by a local funeral home that did not charge us for cremation or the urn. Despite that, our family had multiple expenses that we never imagined we would have. It brings joy to us to know that there is a family with a similar story that is using their talents and resources to assist other families finding themselves in this unimaginable situation.”

Blessing Others Helps With Healing

Emily Shattuck of Pickerington, Ohio, posted on Facebook about how healing it was to hear the Rawlinsons’ story.

“This foundation is beautiful and will do so much to help with the healing,” she posted on the foundation Facebook page. “Our angel babies may not be understood or talked about in the world, but you are never the same once you have them. This foundation is giving us a voice and a community.”

After her daughters were born, Brooke Rawlinson wanted a way to have her girls with her, so she created bracelets with their names and Connor’s name. 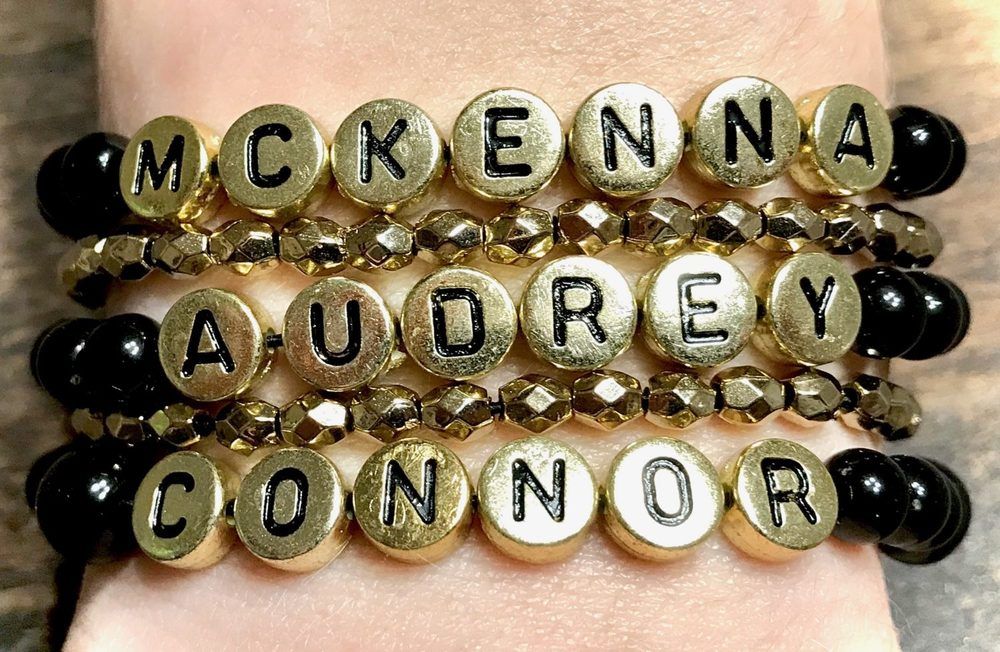 “That’s the first bracelet she’s ever made, now she’s made hundreds,” Brandon Rawlinson said of Brooke, who worked in the communications department for Duncanville ISD before Connor was born.

Now, she has orders for bracelets from across the country with the proceeds helping to pay for the memorial boxes.

“They are $10 apiece,” Brandon Rawlinson said of the beaded bracelets. “Some people buy one and give us $10, some buy one and send us $100, some just send money.” You can order them online.

The couple plans to reach out to hospitals in the area to let them know about the special memorial boxes, too.

“Unfortunately, there’s always going to be a need for this,” Brooke Rawlinson said. “When we get our cards into hospitals, it’s going to increase.”

Brooke Rawlinson said that physically she feels good, but “each day is different emotionally.” Staying busy with Connor, making bracelets and the foundation helps. Each box that goes out has a handwritten card from Brooke and a bracelet for the child’s mother.

“We didn’t want that to be the end for our girls,” she said. “We knew God had blessed us with these girls to be great doctors or teachers. Now we know it was so we could start this foundation. We didn’t know what we were biting off, but now all these people know our girls’ names. I’m happy that we get to do this for people.”

For more information, go to The Audrey & McKenna Foundation on Facebook.