Midlothian, TX - Five contested races are on the March 3 primary ballot in Ellis County, and all five were represented at the Midlothian Chamber of Commerce’s candidate forum on Monday night.

A crowd of about 200 people attended the forum at the Midlothian Conference Center and heard candidates — all Republicans — give a two-minute introduction, answer a short series of questions from moderator Ross Weaver, and finish up with a two-minute conclusion.

The races that are being contested are Judge, Court at Law No. 3; County and District Attorney; Ellis County Sheriff; Texas House District 10; and Precinct 3 Commissioner.

Of the 12 GOP candidates who have filed for these offices, 10 appeared at the forum. The two absences were sheriff’s candidate Charlie Daniels, who could not attend because of a late flight; and House District 10 candidate Robert “Zack” Rader.

Two attorneys, Joe Gallo and Vance Hinds, are running for the judgeship in the new criminal court that will convene for the first time in January 2021.

“My entire legal career has been practicing criminal law,” Gallo said. “I’ve been a prosecutor, I’ve been a defense attorney, and I’ve been a judge for the criminal court for the city of Waxahachie. It’s the only thing I enjoy. If the court had other matters, I wouldn’t be interested.”

Hinds has been an attorney for 26 years and has worked in the prosecutor’s office for seven years. His family has deep roots in Ellis County, and Hinds said both his father and brother are lawyers.

Hinds also mentioned his recent weight loss journey in which he lost more than 200 pounds.

Both candidates said the backlog of cases is the biggest problem in Ellis County’s courts — which was the reason why the new court was created. “Justice delayed is justice denied,” Gallo said. 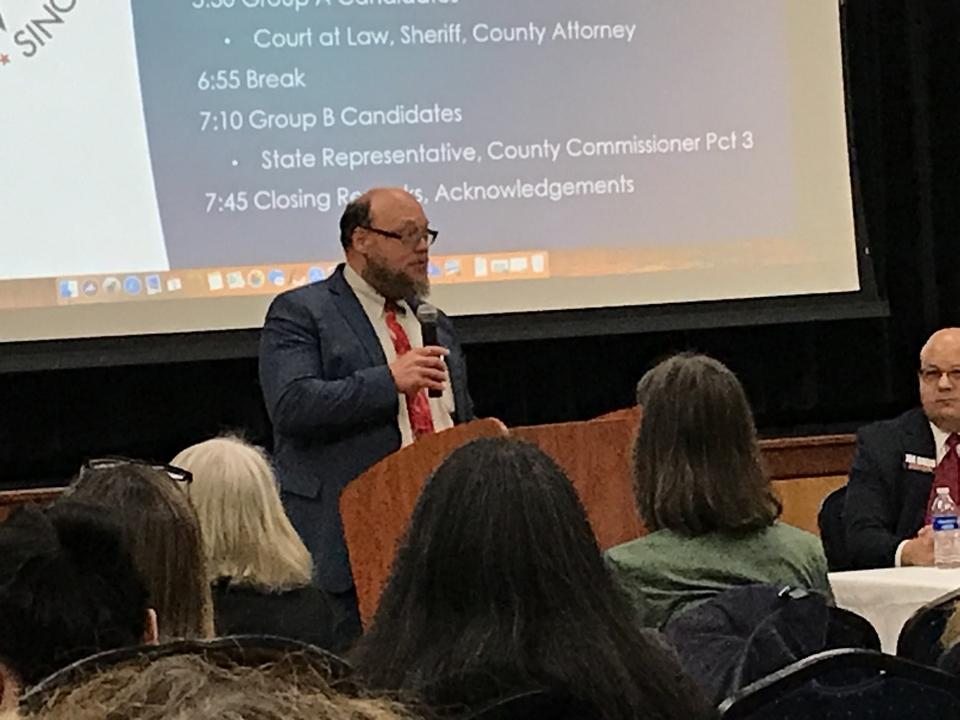 Two attorneys in the Ellis County Attorney’s Office — Julissa Martinez and Ann Montgomery — are vying to replace current DA Patrick Wilson, who announced last year he would not seek reelection.

Martinez introduced herself as “Beto O’Rourke’s worst nightmare” — an educated Latina from the Rio Grande Valley who has strong conservative principles.

Montgomery touted her 17 years of experience in the DA’s office, including the last two years as first assistant DA. She said she is in charge when the elected official, Wilson, is away and handles everything the office handles.

“Why does the sign say County and District Attorney? We are a county attorney’s office with responsibility ... and because of that, we have a wide range and variety of cases,” Montgomery said. “We handle Class C misdemeanors up to capital murders. We handle civil matters for the county. We advise all county officials and elected officials ... We handle a wide variety of things, and I have done all of those positions in the past.”

“I can lead this office efficiently, effectively and wisely for the citizens of Ellis County,” Martinez said.

Incumbent Sheriff Chuck Edge, the former Waxahachie police chief, came out of retirement when he was appointed to the office of sheriff in April 2017 and won reelection to a full two-year term in 2018. Edge is opposed in the GOP primary by Brad Norman, the county’s former chief deputy, who served for 16 years in the Ellis County Sheriff’s Office.

“Ellis County is the first place I’ve called home,” Edge said. “My father was a military man, so I have lived all over the place ... It’s such an honor to work in the only place that I’ve ever really called home in my life.”

In response to a question on how to target enforcement to reduce crime in the county Norman said that crime analysis and a unit to prevent crimes against children are the best ways. Edge said he urges his deputies to make contacts — i.e., pull people over — especially at night in areas where crimes have occurred. Edge also said his office looks at trends and where criminal activity is most active in the county.

Norman noted that the passage of a Tier 2 anti-annexation referendum in Ellis County last year means that large areas of the county will see unincorporated development that the county will be responsible for policing. In Tier 2 counties, municipalities wishing to annex property must seek voter approval in the area to be annexed. “We’ve got to be ready for that growth,” Norman said.

Edge said that the size of his department, the budget, the technology and the personnel have changed since his opponent left the sheriff’s office. “You can’t run an organization like that without a plan,” Edge said.

Jake Ellzey of Midlothian and Ryan Pitts of Waxahachie are competing to take the place of District 10 Rep. John Wray, who decided last year not to seek reelection.

Pitts, a University of Texas law school graduate, promoted his long family ties to Ellis County and his activity in civic organizations and activities, and said he would go to Austin to fight for the interests of the county.

Ellzey, a 20-year Navy veteran and fighter pilot, previously ran for the Texas House in 2014. He also filed to run against former U.S. Rep. Joe Barton in the 2018 GOP primary election and eventually lost in a runoff against the current congressman, Ron Wright, after Barton retired.

Ellzey pledged to fund education fully and ticked all the conservative boxes in his introduction, promising lower property taxes, promoting property rights, defeating high speed rail, protecting one’s right to defend oneself, and protecting the rights of the unborn to live.

Pitts is the son of Jim Pitts, who represented Ellis County in the Texas House for 22 years (1993-2015). Ryan Pitts cited his father as a role model because of his hard work and determination, and also named President George W. Bush as a role model for “showing determination and grit and doing what he felt was right” after the Sept. 11, 2001 terror attacks.

Pitts said property taxes in Ellis County are rising to the point where people are being taxed out of their homes, and he promised to go to the Capitol to fight for the rights of property owners.

Ellzey said one of his priorities is continuing the economic boom that Texas has been experiencing for more than two decades.

“Anybody who goes to Austin doesn’t create a job,” Ellzey said. “It’s my job to go down to Austin to ensure you have a good regulatory climate, so you can build your jobs, build your businesses, be successful, hire more people, (and) bring more people in here ... Anybody in government who takes credit for building more jobs, they’re not telling the truth. You and I both know it.”

Incumbent Paul Perry is running for a third four-year term as Precinct 3 Commissioner. Perry will face Richard Rozier, a former DeSoto mayor as well as Chairman of the Waxahachie Chamber of Commerce and president of Ellis County Emergency Services District No. 6.

“We have a lot of work to do, and we need to get after it,” Rozier said. “I offer myself, and my skill set and my background to help get after it and do the work that I believe is so important. The infrastructure in Ellis County is way behind where it needs to be at ... The county has grown so fast, and the infrastructure hasn’t kept up.”

Perry, who graduated from Midlothian High School, earned two degrees from Baylor University and has about 30 years of experience in the financial sector, said he’s a numbers person.

″(What) I brought to Ellis County government is more transparency, a conservative view,” Perry said. “And yes, almost every day I am in contact with somebody from some other agency or some other division of government, working to make your life better.”

Both candidates were asked about county road maintenance. Rozier said working smart to stretch the road budget is the answer to maintaining roads in Precinct 3 and said if elected, he would make a work plan for roads and publicize it.

“One of the things I think we’ve got to do is not waste money doing slipshod repairs,” Rozier said. “We’ve got to repair roads completely, build them in a good fashion so that when we invest our money in them, we get a long lifetime out of those roads.”

Perry said his precinct is the largest in Ellis County and contains 293 roads and 60 bridges. He said the roads that were built three years ago are holding up today.

“I am well-aware that you have to plan ahead, and the last three years, we have resurfaced from the ground up 90 miles of road,” Perry said. “The fact is that, year by year, weather determines how much you can get done. So you have to look at it over a longer period of time.”