Midlothian, TX - Last year, the Midlothian Downtown Business Association came up with an idea for a historic mural on the wall of a downtown business. With a few weeks of hard work from an artist with local connections, the mural is now on full display.

An unveiling event was held last Thursday evening for the mural, which was hand-painted on the side of 211 W. Ave. F in Midlothian, the home today of Rally Sportswear. The mural is near the corner of 8th Street and Avenue F.

The 16-by-35-foot mural was quietly painted over a 3 1/2 week period this summer by Kyle Wadsworth of Dallas, who once lived in Midlothian as a youngster and has been painting murals throughout North Texas for almost 20 years. Wadsworth has branched out to create works of art in the Houston area, as well as in Colorado and neighboring states. 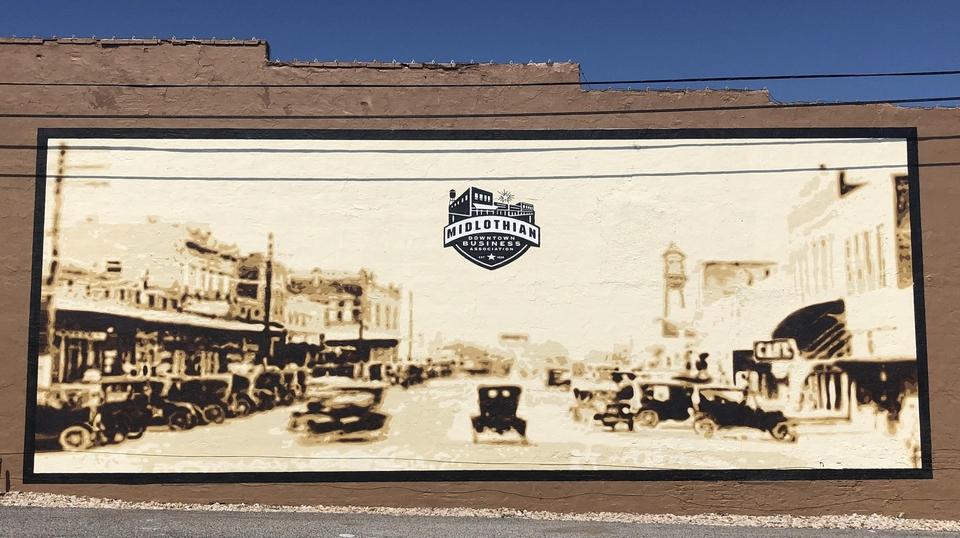 “I was excited about the opportunity!” Wadsworth said. “My family moved to 4 acres in Midlothian in the 70′s, and that’s where I attended elementary school. I always enjoy visiting Midlothian, and it was great to spend several weeks there and see the growth and progress. I was very proud to see a Black Lives Matter march while I was working one day. It’s nice to see a place where I grew up keeping pace with important issues of our time.”

The mural, which depicts a downtown scene from the 1920s, was commissioned by the Downtown Business Association and supported by a grant from the MCDC. The MCDC is a nonprofit organization charged with administrating sales tax funds for projects that improve the quality of life for the citizens of Midlothian.

The City Council authorized the mural in a zoning ordinance last November. In January, the MCDC approved the logo as it appears on the mural.

Wadsworth documented his progress with photos and videos on social media as he began his work in late June, working on the image from right to left. By June 28, he was a third of the way done, and a little less than a week later he was getting closer to being finished. By July 15, Wadsworth had completed the entire image and all that was left was blending and adjustments.

“Recreating the look of an old sepia tone photograph was tough,” Wadsworth said. “It has soft edges and the details only make sense when you back away from the wall. I was constantly backing away to see what I was painting.”

Wadsworth’s other work includes a number of city water towers, school hallways and children’s medical clinics. He said some of his favorite murals were made for NFL player Aqib Talib’s family: a Scarface mural in the media room and a War Videogame mural for their son’s room, as well as several others.