Midlothian, TX - Jonathan Soukup was born into the agricultural business. His father worked as a general manager at a local nursery called Casa Flora and later started the family business, Southwest Perennials.

For the last 25 years, the company has sold over 300 different plant varieties to individuals and businesses across the country. Soukup has been working full-time for his father for about 14 years.

Once called Tietze Wholesale Florist, their spot in the neighborhood has been there for nearly 100 years. The Soukups bought the location seven or eight years ago.

Now, Soukup says a proposed site for the placement of “earth materials” is threatening his family’s business. North Texas Natural Select Materials, the largest supplier of cushion sand and select fill material for construction companies in North Texas, applied for a special use permit for a site to be used for dumping, loading and crushing rock materials. The company did not respond to a request for comment. 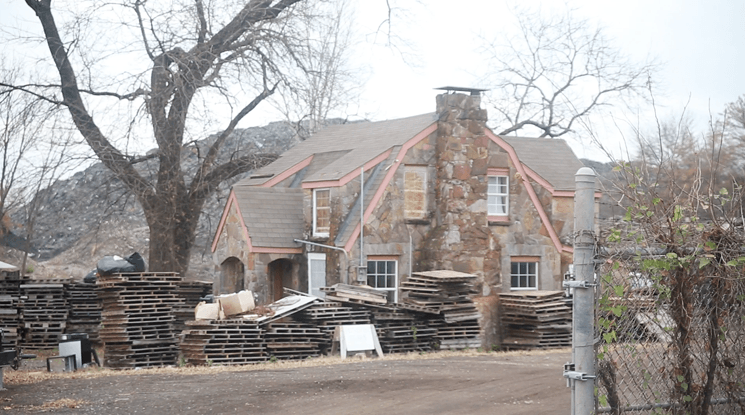 The Floral Farms neighborhood, largely known as the former site of Shingle Mountain, is fending off more industrial development in the community.

The development district in the area doesn’t allow the placement of fill material, which is why they need the special permit. The permit is being taken up by the Dallas City Plan Commission on Thursday. If approved, it would be re-evaluated after two years.

“What it comes down to is our plants need sunlight,” Soukup said. He’s worried the dust will settle on the greenhouses and block out the sun the plants need, and the dust could be sucked into the greenhouse through the ventilation systems. He recently put in $150,000 for improvements at their Floral Farms facility.

“It’s very frustrating,” he said. “We’re trying to maintain a business that’s been there since 1927, putting lots of money into it to improve it, make it a decent part of the neighborhood, and this is how we’re rewarded.”

He said three major nursery operations in the neighborhood could be affected, but it’s nothing new. Soukup said the area has been neglected for  years.

Dallas zoning changes made throughout the ’80s intended to protect people from hazardous industrial uses left out and damaged majority non-white neighborhoods. As a result, land next to these residential areas became industrialized.

The effects of those decisions are still visible in Floral Farms. Trucks often block and congest Bermuda Road as they enter the side gate of a property that faces South Central Expressway. The road previously did not allow truck traffic.

Residents who live on Bird Lane in Floral Farms have complained about debris and other materials washing off nearby industrial lots onto their land. When it rains, the infill next to residential land on Rhodes Lane also causes flooding. Still, they’re always fending off more industrial developments.

Evelyn Mayo, the chair of Downwinders at Risk, a local grassroots environmental group, said the Floral Farms community would rather see the land used as a public park under the neighborhood plan they want the city to adopt.

Not long after the last shingle left Shingle Mountain, Mayo and the Floral Farms community heard about the plant. Mayo said it takes constant vigilance to keep fighting these potentially disruptive and harmful developments in the neighborhood. “The only way to avoid playing Whac-A-Mole like this is to change the zoning,” she said.

The city knows zoning is a problem. The area is already designated for an authorized hearing, which is a public rezoning process. “But there’s so much damage that could be done between now and when the community gets to the top of the list for authorized hearing,” Mayo said. “You would hope that just an urgency around public health and public wellness would bump this community up the list, but so far we’re not seeing that from the city.”

Having an adopted neighborhood plan could theoretically move them up the list.

But as they worked on their neighborhood plan, they said the city wasn’t listening to them. Recently, Mayo said, they were told the process for having a neighborhood plan adopted by the city doesn’t exist anymore.

The community followed the steps taken by two previously adopted neighborhood plans, but when they started communicating with the city about moving forward, they were told it wasn’t possible. “They kind of chalked it up to Forward Dallas,” Mayo said, referring to a citywide plan Dallas bills as inclusive.

The way the city addresses planning is under review as a part of Forward Dallas, preventing the neighborhood plan from moving forward.

“Our argument is this isn’t just any old neighborhood. This is a neighborhood that’s dealt with chronic industrial encroachment that’s actively threatening the fate of this community,” Mayo said. “‘These aren’t just short-term decisions. These are long-term, lasting decisions that have serious implications.’”

“It’s kind of adding insult to injury, by not assuring residents that they have their best interests at heart for the long run.”

The proposed facility is heading to the Plan Commission with a staff recommendation for approval. According to the meeting agenda this Thursday, “Staff supports the request because the use is not foreseen to be detrimental to surrounding properties. The area of request is surrounded by similar industrial uses …”

Jonathan Soukup and other Floral Farms community members will speak before the commission this week in opposition to the special-use permit. If it gets approved, Soukup said, he plans to take it up with the Texas Commission on Environmental Quality. “You’ve got to make the turn somewhere and start cleaning up the area,” he said.