Muslim woman gets kicked out of Trump rally — for protesting silently

Rock Hill, S.C. - As Donald Trump questioned the motives of Syrian refugees at a Friday night rally, saying they “probably are ISIS,”

a woman sitting in the stands of the sports arena behind him silently stood. She was wearing a white hijab and a blue T-shirt that read: “Salam, I come in peace.”

Trump kept speaking, but soon the crowd erupted, holding up their campaign signs and chanting: “Trump! Trump! Trump!” That was the formal signal for security to remove her from the rally — even though she stood quietly, not saying anything. She was joined by several other protesters, all wearing yellow eight-pointed stars, reminiscent of the six-pointed stars Jews were forced by the Nazis to wear on their clothing during the Holocaust. On the eight-pointed stars, a common symbol in the Islamic world, was this message: “Stop Islamophobia.”

The woman is Rose Hamid, a 56-year-old flight attendant who is Muslim, according to CNN. After being escorted out by security officers and campaign representatives, Hamid told CNN in an interview that some of the Trump supporters sitting near her were kind and apologized as she was led out. But she said others accused her of having a bomb or shouted “Get out!”

“This demonstrates how when you start dehumanizing the other, it can turn people into very hateful, ugly people,” Hamid told CNN. “It needs to be known.”

Hamid was one of a handful of protesters removed from the rally at the Winthrop Coliseum in this college town in northern South Carolina. Trump’s spokeswoman and campaign manager have yet to respond to a request for comment.

Before the rally began, the crowd was told that no protesting of any sort would be allowed, and that protesters needed to stay in a free-speech space outside the venue. Some of Trump's supporters argue that though the woman did not shout or cause a disturbance, wearing the star on her shirt and standing while others were sitting was fair grounds to be asked to leave.

Last year, Trump announced that if he becomes president, he will impose a temporary ban on allowing most Muslims from entering the country. He has also called for heavy surveillance of mosques, and said that he's open to the idea of closing mosques or creating a database of some Muslims in the United States.

[Trump says he ‘absolutely’ wants a database of Syrian refugees]

At the rally on Friday night, Trump told a crowd of about 7,000 that the United States should not allow Syrian refugees into the country, and he criticized President Obama for not using the term "radical Islamic terrorism."

"He refuses to say the name," Trump said. "If you don't say the name, you're never going to solve the problem."

Trump paused for a commotion in the crowd involving protesters, then he resumed.

[The strategy behind Trump's war on political correctness]

"Hey, look, it's a problem, we have a problem," Trump said. "We have a problem, and it's going to be solved, but we have to understand the problem. We have to know the problem, and before we do anything and before we do anything stupid, we have to know what we're doing. So we do have a real problem. We do have a real problem. There is such a level of hatred that you can't even believe it. There's a hatred, a deep-seated hatred. We have to find out where it's coming from and what can we do about it?"

Later that night, the Council on American-Islamic Relations called on Trump to publicly apologize to Hamid and to meet with American Muslim leaders to discuss how his rhetoric has sparked an "anti-Muslim hysteria."

"The image of a Muslim woman being abused and ejected from a political rally sends a chilling message to American Muslims and to all those who value our nation's traditions of religious diversity and civic participation," said Nihad Awad, the council's national executive director. "Donald Trump should issue a public apology to the Muslim woman kicked out of his rally and make a clear statement that American Muslims are welcome as fellow citizens and as participants in the nation's political process." 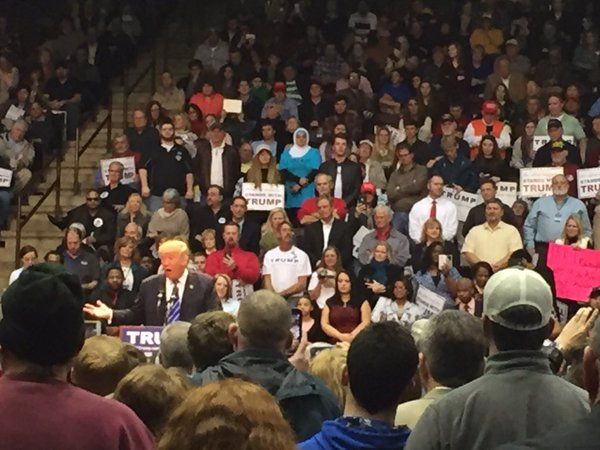