A little piece of Silicon Valley is developing a strong presence in the small business community.

Local business owners have traded traditional credit card readers for a small white square that employees can attach to a tablet or smart phone.

Square Inc., based in San Francisco, is the company many small-business owners have tasked with processing their debit and credit card transactions.

Whether it’s for coffee at Lexington Coffee Shop, a taxi ride with EZ Rider or a pedicure at Polished by Claire V., shoppers are swiping their cards through Square’s one-inch card reader.

The mobile payment company, which is headed by Twitter CEO Jack Dorsey and went public Nov. 18, is transforming the way people pay for goods and services. With a small piece of hardware and a phone or tablet application, business owners can ditch traditional credit card machines for a simpler, cheaper device.

“When we had the old credit card machine, we couldn’t accept Discover or American Express because those fees were so much higher,” said Kelly Nye, a barista at Lexington Coffee Shop, which uses Square to process payments.

Prior to using Square, Nye said, the coffee shop had a $5 minimum for credit card payments because of the high fees associated with traditional transaction services. Now, customers can pay with a card no matter the total, and the coffee shop is charged a flat 2.75 percent fee per transaction.

“We were losing money before with the old system, and the Square has actually saved us quite a bit,” Nye said.

Square is one of several companies shaking up the payment industry. Google, Apple and Samsung have also invested in mobile payment technology.

Heidi Horne, a stylist at Roots Salon in the West Village shopping center in Roanoke County, said she anticipates sticking with Square because of the applications that allow her to track daily, weekly and monthly sales.

“I think I would be very loyal to Square,” she said. “It breaks it down for me so I can track very easily with the app.”

She said monitoring sales is especially helpful because she works independently. Horne, who works in a salon with five other independent stylists, said all but one of them use Square to process payments.

Depending on the processing company, merchants are charged a percentage of the transaction, a flat rate or a combination of the two. Many of these platforms also have monthly fees as well.

When Eric Mason, owner of Lexington taxi service EZ Rider, started his company, he said wasn’t sure how successful he would be and was worried about investing in a credit card machine.

“I didn’t want to pay a monthly fee before I knew,” he said.

Square’s fee is charged per transaction, rather than monthly, making it easier for small businesses getting started.

Square’s simplicity won Mason over. Drivers are given the card reader to attach to their smart phones. Customers then swipe their cards, select a tip displayed on Square’s payment app and sign for their purchase.

“It’s nice having that option pop up so they can see the math,” Goad said.

Customers then choose if they want a receipt printed, texted or emailed. More and more, Goad said, clients are opting out of receipts altogether.

Small businesses make up the bulk of Square’s gross payment volume, with 63 percent of transactions coming from sellers with less than $125,000 in annual payments, according to the company’s IPO filing.

“Square definitely has cornered that market,” said Meghan Cieslak, a spokeswoman for the Electronic Transactions Association, a trade group for companies that process payments electronically. “They’ve simplified the process, which I think for small merchants, it saves them a lot of time.”

Cieslak said that while Square has seen success in targeting small businesses, one concern is that those same businesses might switch to a more traditional processing service once they reach a certain size.

One of those is PayPal, which was founded in 1998 and accepts payments from more than 173 million customers. It charges 2.9 percent per transaction plus an additional 30 cents per sale, according to its website.

Google and Apple have a strong presence in the industry as well, tapping into payment technology with Google Wallet and Apple Pay.

Although Square’s current focus is on small businesses, the company has experimented with teaming up with big corporations. In 2012, Square and Starbucks entered a partnership in which Square became the exclusive processor for all debit and credit card transactions in Starbucks stores. According to Square’s IPO filing, the partnership with Starbucks cost Square $421.8 million over three years.

“The terms of the agreement were unprofitable for us,” the company said in the filing.

Square has seemed to experience more success since it decided to end its relationship with Starbucks. But the company has yet to turn a profit, and according to its IPO filing, it may never get there.

“Our business has generated net losses, and we intend to continue to invest substantially in our business,” Square said in its IPO filing. “Thus, we may not be able to achieve or maintain profitability.”

“They’ve been losing considerable amounts of money,” said Gil Luria, an analyst at Wedbush Securities Inc., a Los Angeles-based investment firm. “What Square does is offer very low-cost merchant accounts, and it’s unclear how profitable that is.”

The company has indicated that it is seeking business in companies that process more payments. 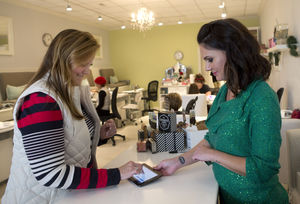