all game to carry Peyton Manning to his second Super Bowl title with a 24-10 victory over the Carolina Panthers on Sunday.

Manning threw for just 141 yards and committed two turnovers in one of the least productive games of his brilliant career that could be coming to an end.

But with Miller leading a defense that recorded a Super Bowl record-tying seven sacks and forced four turnovers for the Broncos (15-4), Manning ended an up-and-down, injury-riddled season with another title to go with the one he won with Indianapolis nine years ago.

Newton's MVP season ended in disappointment for the Panthers (17-2). He lost two fumbles, threw an interception and failed to produce a touchdown for the only time this season. 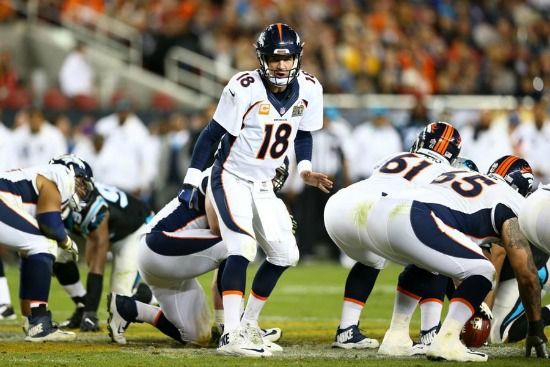 SANTA CLARA, CA - FEBRUARY 07: Peyton Manning #18 of the Denver Broncos looks on in the fourth quarter against the Carolina Panthers during Super Bowl 50 at Levi's Stadium on February 7, 2016 in Santa Clara, California. (Photo by Ronald Martinez/Getty Images)