Orlando, FL - Fifty people were killed and dozens more were hospitalized after a gunman opened fire at a gay nightclub in Orlando, Fla. early Sunday, turning a lively dance club into the site of the worst mass shooting in American history.

The attack is being investigated as an act of terrorism. The shooter had previously been investigated by the FBI for comments he made about radical Islamic propaganda, NBC News reports.

Officials said in a call to police before the club attack, the shooter, identified as 29-year-old Omar Mateen, swore allegiance to the leader of ISIS and mentioned the Boston bombers, NBC  and CNN reported.

The 29-year-old man from Port St. Lucie, Fla., was killed in a shootout with police. Authorities say he came “organized and well prepared,” armed with an assault rifle, handgun and another “suspicious device.”

“It’s more likely than not that it was an ideologically motivated attack,” U.S. Rep. Alan Grayson (D-Florida) said during a mid-morning press briefing, adding that it was “very likely” that Pulse Orlando was targeted because it’s a popular gay bar and dance club.

“It’s not a coincidence that the attack took place where it did and when it did,” he said.

Authorities originally believed that about 20 people had died in the attack, but upped the death toll to 50 after a more thorough examination of the club. Officials said another 53 people were hospitalized, many of them critically injured.

Until Sunday, the 2007 rampage at Virginia Tech — which killed 32 people and wounded 30 others — was the country’s worst mass shooting, according to The Washington Post.

Orlando Mayor Buddy Dyer asked the governor to declare a state of emergency for the city.

Authorities were working to determine whether the attack was the result of domestic or international terrorism.

House Homeland Security Chairman Michael McCaul, R-Austin, believed the attack to be he work of radicals.

“This appears to be the worst terrorist attack on American soil since 9/11, and it is a sobering reminder that radical Islamists are targeting our country and our way of life,” he said in written statement.

The violence erupted about 1 a.m. Dallas time, when police say Mateen entered the club and opened fire. He exchanged shots with an officer working onsite, then went back inside to take hostages. Although the club was preparing to close, more than 300 people were still inside.

Three hours later, authorities sent in a SWAT team to rescue the hostages. Officers in armored vehicles confronted the gunman. Police said one officer was shot and suffered a facial injury, but officials credited his helmet for saving his life.

Witnesses described a bloody scene in and around the downtown club, with dozens of shots fired.

One witness told the Orlando Sentinel that the shooting lasted “the duration of an entire song.”

People who were dancing or at the bar tried to take cover by dropping to the floor. One person who said he had been at the club when the shooting began managed to escape because he was near an exit.

Another clubgoer, Jon Alamo, said he was at the back of one of the club’s rooms when the gunman came in through the front.

Mina Justice was outside the club trying to contact her 30-year-old son, who texted her when the shooting happened and asked her to call police. He told her he ran into a bathroom with other club patrons to hide. He then texted her: “He’s coming.”

Mina said police waited three hours to rescue the hostages because it was an evolving situation with high risk. He said they had some communication with the shooter during that time, but declined to release details.

It was unclear whether all the victims were killed during the initial shooting, or whether any died during the shootout three hours later or while waiting for help, Mina said.

Authorities said there was no further threat to the Orlando area.

They said an explosion that had been heard blocks away from the club during the hostage situation was caused by a device intended to distract the shooter.

Police said they recovered an AR-15 rifle and a handgun from Mateen. It was unclear how many rounds had been fired. Dozens of emergency vehicles responded to the nightclub.

As officers armed with assault rifles cordoned off numerous blocks nearby, an armored vehicle was used to help some of the people escape the area.

A witness said the injured were also being loaded into the backs of pickups. The New York Daily News quoted another witness who said medical personnel were fitting several people into one ambulance while more of the wounded were lying in a parking lot near the club.

Witnesses said authorities seemed to be searching for someone in the area around the club after there were reports that there was a second shooter involved in the attack. But authorities said those accounts were unfounded.

Video of emergency crews helping victims was posted on social media as other victims were carried or were walking to nearby Orlando Regional Medical Center.

By 6 a.m. Dallas time, the families of people who had been at the club were ushered into the medical center — which had been placed on lockdown during the crisis — to learn the fate of their relatives.

Soon after police reported that the gunman had been found dead, the club posted online: “As soon as we have any information we will update everyone. Please keep everyone in your prayers as we work through this tragic event. Thank you for your thoughts and love.” 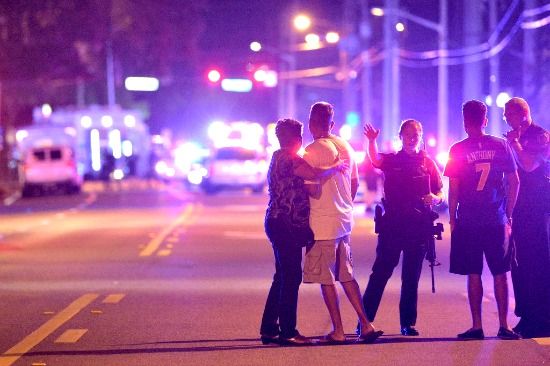 Police direct relatives away from the scene of a mass shooting at a gay nightclub in Orlando, Fla., early Sunday. (AP Photo/Phelan M. Ebenhack)