Parkland, FL - A 19-year-old former student armed with an AR-15 opened fire inside a South Florida high school on Wednesday, police said, killing at least 17 people in the latest burst of deadly violence to erupt inside an American school.

The shooting sparked a brief, intense manhunt across the quiet suburban community of Parkland, Fla., locking teachers and students huddled inside classrooms until officers captured the young man they said had gunned down his former peers.

“It’s a horrific, horrific day,” said Israel, noting that his triplets had graduated from the same school where the shooting occurred.

The shooting was the latest in a long line of violent attacks that have shattered the peace inside schools, movie theaters, churches, offices and other public places. Once again, bullets tore through school hallways as students and teachers sought shelter. Once again, lives were cut short and others were irrevocably, painfully changed. Once again, the nation watched with horror as it confronted the unthinkable. 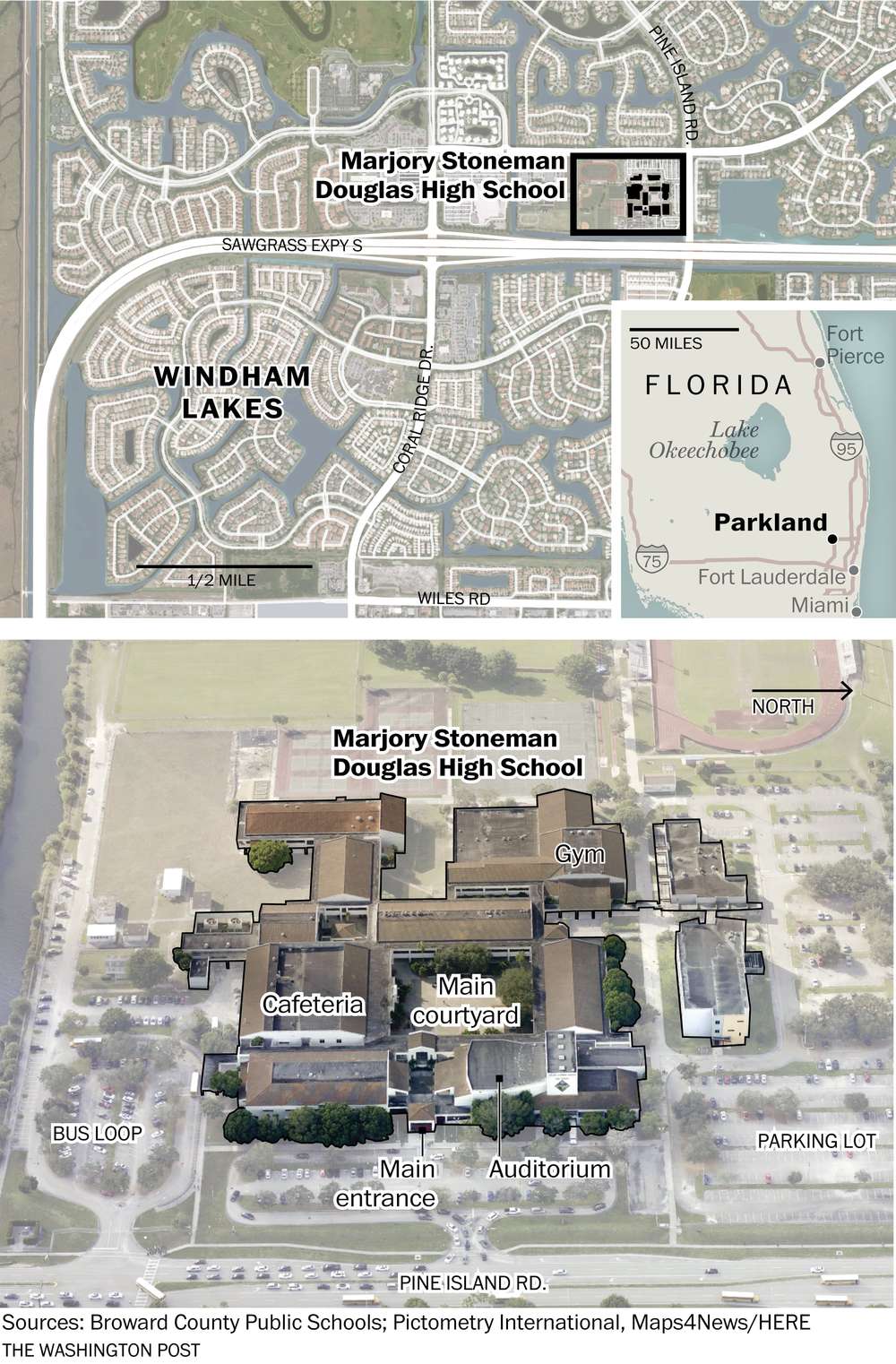 For Israel’s department, the shooting at Douglas marked the second time in a little over a year that they have responded to a mass shooting. In January 2017, Broward Sheriff’s deputies rushed to Fort Lauderdale-Hollywood International Airport to respond to a gunman who got off of a plane, pulled out a gun and began firing at other travelers, killing five people.

Authorities said the Valentine’s Day rampage at Douglas began outside the building before the gunman headed inside not long before classes were to be dismissed for the day. Police identified the suspected gunman as Nikolas Cruz, 19, and said he had been a Douglas student who was expelled for unspecified disciplinary reasons.

“It’s just catastrophic,” Israel told reporters at a news briefing. “There really are no words.”

It was possible Cruz may have also attended J.P. Taravella High School, which is not far from Douglas, but that was not clear, Israel said.

Police did not immediately detail a possible motivation for the shooting. Investigators have begun digging into Cruz’s activities online and on social media, and what they found so far was “very, very disturbing,” Israel said, though he did not elaborate.

The gunman had “countless magazines” and an AR-15 rifle, Israel said. It was unclear if the shooter had a second weapon, Israel said. He was briefly taken to a hospital with non-serious injuries, Israel said.

After the shooting, parents were directed to a nearby hotel to reunite with their children. They were unable to go to the school, which is located down the street from an equestrian park where riders trot on horses next to a children’s playground.

“It is a day you pray every day you don’t have to see,” Robert W. Runcie, the superintendent of Broward County Public Schools, told reporters.

Runcie said officials were not aware of any threats made before the incident.

Earlier in the day, Dan Booker, a fire chief from a nearby city, had said that the number of injured could stretch much higher, estimating that they could see as many as 50 wounded victims.

Video from the scene showed police surrounding the building and students being quickly marched away from Stoneman Douglas High. News cameras also captured people being wheeled out on stretchers, though their conditions were not immediately clear.

Police from nearby Coral Springs, who were also responding to the incident, urged students and teachers to remain barricaded inside the school. Law enforcement officials said they were clearing students building by building.

Gov. Rick Scott (R) said he had been briefed by the Broward County sheriff, whose agency was leading the response, as well as by the county’s school superintendent. President Trump was notified of the shooting, White House deputy press secretary Lindsay Walters said.

“The president has been made aware of the school shooting in Florida. We are monitoring the situation. Our thoughts and prayers are with those affected,” Walters said.

The Broward County school system wrote in a message on Twitter that students and staff “heard what sounded like gunfire” close to the school’s dismissal time.

“The school immediately went on lockdown but is now dismissing students,” the school system wrote. “We are receiving reports of possible multiple injuries.”