Woman opens fire at YouTube headquarters, wounding at least 3 before taking her own life

Two law enforcement sources told The Times that the shooting was a domestic incident, with the shooter targeting someone who worked on the YouTube campus. The incident occurred in an outdoor area that's easier to access than other parts of the campus, the sources said. It's unclear if the assailant worked there.

San Bruno Police Chief Ed Barberini told reporters Tuesday afternoon that one person, believed to be the shooter, was found dead of a self-inflicted gunshot wound. Four people were taken to area hospitals for medical treatment, three with gunshot wounds.

The condition of the fourth person was not available.

In a tweet, President Trump offered his "thoughts and prayers" to everyone involved in the incident Tuesday afternoon.

Was just briefed on the shooting at YouTube’s HQ in San Bruno, California. Our thoughts and prayers are with everybody involved. Thank you to our phenomenal Law Enforcement Officers and First Responders that are currently on the scene.

Witnesses in the area said they saw dozens of firefighters and police officers descending on the area. Other witnesses said they saw police holding rifles and other weapons. 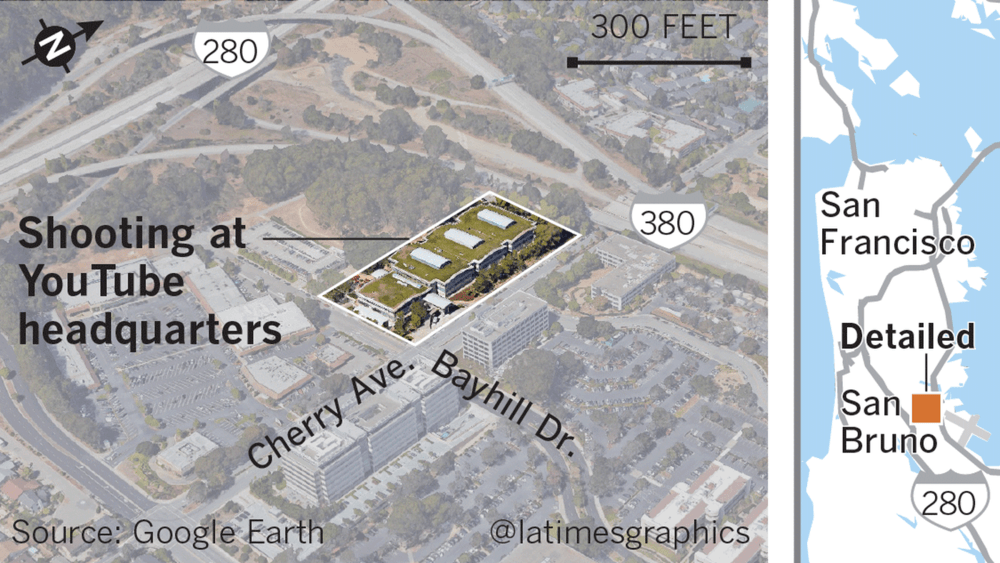 The first reports of a shooting came in to San Mateo County dispatchers before 1 p.m., according to recorded traffic posted online by Broadcastify.com.

"Shooter. Another party said they spotted someone with a gun. Suspect came from the back patio," the dispatcher said, according to scanner traffic posted online. "Address is 901 Cherry Avenue. … Again we have a report of a subject with a gun, they heard seven or eight shots being fired. This would be from the YouTube building."

As the reports began to flood dispatchers, a sergeant was heard on the radio taking the call. He told other officers responding or monitoring the situation "to wear their gear."

Video from the scene showed people holding their hands over their heads as they left the building, which is located in a suburb south of San Francisco. An employee told the Los Angeles Times that three YouTube buildings — 900, 901 and 1000 Cherry Avenue — had been placed on lockdown.

"I looked down and saw blood drips on the floor and stairs," Todd Sherman, a YouTube producer,//twitter.com/@tdd"> wrote on Twitter. "Peaked around for threats and then we headed downstairs and out the front."

Lucacio Simoes, 40, an Uber driver from San Bruno, learned about the shooting from a friend's text message while he was having lunch at the nearby Tanforan shopping center. Simoes said he drove his Ford Explorer toward YouTube headquarters to see if he could help.

"There were people running down the street," he said.

Simoes said he turned off the Uber app and started to pick up people he passed on the street.

"I just opened the door and asked if they needed help. I was getting people away from YouTube. At one point I had seven people in the car. I picked up one man from Sneath Lane and when he got in the car he just started crying. He was in shock."

Michelle Tam, a hostess at the Hashes & Brews restaurant about a block away from the company's headquarters, said a swarm of police and fire vehicles drove into the area around 12:45 p.m.

"We see lots cops and firefighters," Tam said. "We can't see any people. It's just a lot of trucks along the street at the moment."

"They came in from a back door," she said. "They sat down at a table. They were in a daze. One guy, there was a little blood on his head."

One employee had a partial fragment of a bullet in her shoe, Tam said.

At another nearby business, roughly two dozen customers barricaded themselves inside Nueve restaurant around 1 p.m., when authorities told them to "stay far away from YouTube," bartender Carlos Gutierrez told a reporter over the phone.

"Is this really happening, or is it a false alarm?" Gutierrez wondered aloud as he and others huddled near the bar.