House vote, and on to the Senate: What’s next in impeachment

Washington - The House will vote on the impeachment of President Donald Trump this week after spending the past three months investigating the president’s dealings in Ukraine and deciding whether his behavior was grave enough to qualify as high crimes and misdemeanors.

The House Judiciary Committee on Friday approved two articles of impeachment against Trump: abuse of power and obstruction of Congress. The vote came after a bitter two-day debate in which Democrats said it was their duty to impeach and furious Republicans defended the president and battled over process.

The articles charge that Trump abused his power and betrayed the nation as he urged Ukraine to investigate his political rivals and withheld military aid to that allied country, as well as a White House meeting for its president.

What’s next in impeachment:

House leaders are preparing for the final impeachment vote just as lawmakers are about to leave for the holiday break. Approval would set up a 2020 trial in the Senate.

Votes on the two articles could come as soon as Wednesday, with a meeting to set debate rules already scheduled for Tuesday. Floor consideration is expected to be much like that of a regular bill.

The House Judiciary Committee vote was strictly along party lines, and the floor vote is expected to be similar, with a few exceptions. No Republicans have so far signaled that they will support the articles of impeachment, but a small handful of Democrats who represent GOP-leaning districts have said they may join Republicans in voting against them. 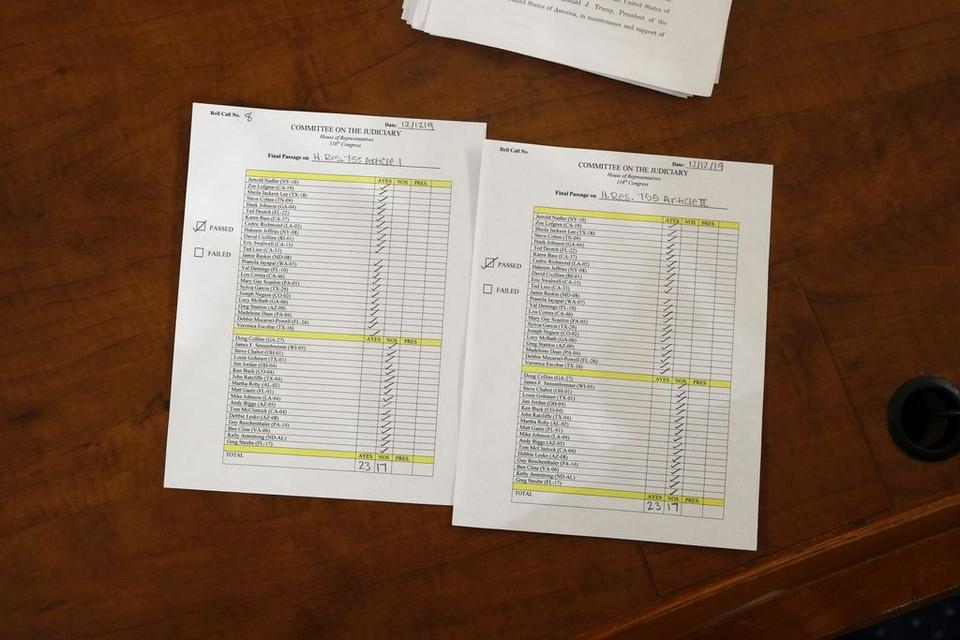 House Speaker Nancy Pelosi is expected to name, as soon as this week, a handful of members to argue the Democrats’ case in the Senate trial. It’s still unclear who these impeachment managers will be, but they are likely to be members of the Judiciary and intelligence committees that took the lead on the case.

Pelosi has kept quiet on potential names. But the managers are expected to be from safe Democratic districts, diverse in race and gender and from all parts of the country. It is also likely that the number of impeachment managers will be fewer than 13, the number of GOP managers in President Bill Clinton’s 1998 trial.

If the House approves the charges, as expected, impeachment would then move to a weekslong Senate trial, where senators are jurors and the impeachment managers act as prosecutors. The chief justice of the United States presides over the trial.

If the Senate approves an article of impeachment with a two-thirds vote of “guilty,” the president is convicted and removed from office. If all the articles are rejected - as expected - the president is acquitted.

It is unclear how long the trial will last or exactly how it will be structured. On Sunday, Senate Minority Leader Chuck Schumer proposed that four witnesses be called, including acting chief of staff Mick Mulvaney and former national security adviser John Bolton. Schumer proposed that the trial begin the week of Jan. 6 and allow for as many as 126 hours of statements, testimony, questions and deliberations, suggesting a trial that could run three weeks or more.

Majority Leader Mitch McConnell didn’t comment Sunday night on the particulars of Schumer’s proposal, which came in a letter to McConnell. Recently he has indicated a preference for a speedy trial without references but has also suggested he would follow the will of the White House.

This is the fourth time in history Congress has moved to impeach a president. If he were convicted by the Senate, Trump would be the first to be removed.