“If you’re among the nearly half of all the nation’s households that have responded already, thank you!” said Census Bureau Director Dr. Steven Dillingham. “It has never been easier to respond on your own, whether online at 2020census.gov, over the phone, or by mail — all without having to meet a census taker. It’s something everyone can do while practicing social distancing at home to make a difference today, tomorrow and the next 10 years.” While nearly half of all households have responded online to the 2020 Census, some may prefer to receive a paper questionnaire. About 22% of the country received a paper form at the beginning of the census. 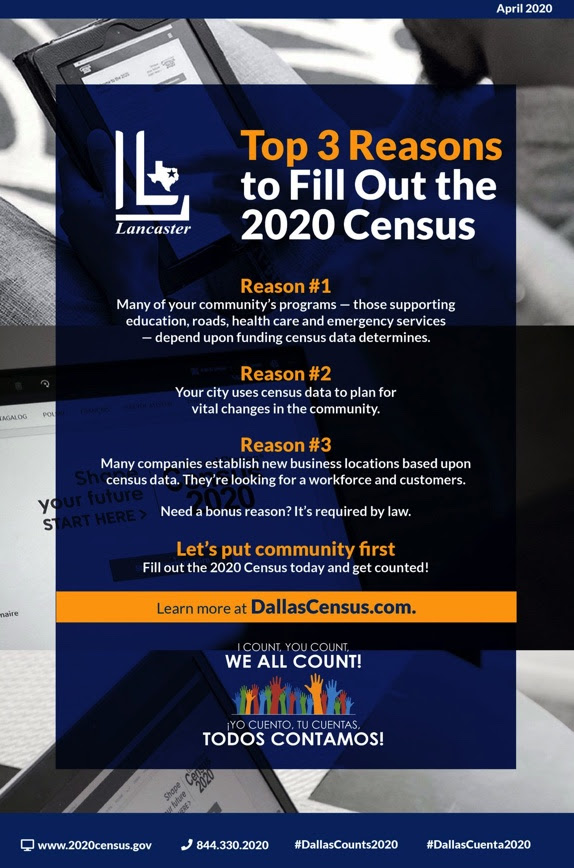 You COUNT! Fill out your 2020 Census form to help shape the future of Lancaster for the next decade.

Some areas where census takers were originally going to hand-deliver forms in person will now receive a letter in the mail from the Census Bureau reminding them to participate, including many households in Puerto Rico. Even if households don’t receive a letter in the mail, the Census Bureau will drop off a census invitation and paper form as soon as it is safe to do so. Census takers will also follow up with all households that do not respond on their own.

Households receiving the paper questionnaire can still respond online or by phone, or they can return it by mail in the enclosed envelope. They can choose to respond online at 2020census.gov in English or 12 other languages, or receive assistance through language guides and videos available in 59 languages. When you respond online, use the Census ID from the letter or provide your address.

“Once you have responded, please encourage your family, friends and loved ones to complete the census too,” Dillingham said.

The public should respond for the number of people living at that address as of April 1. Responding now to the 2020 Census will minimize the need for a census taker to follow up and visit your home in person later this year.

The U.S. Constitution mandates a census of the population every 10 years. Responding to the 2020 Census is easy, safe and important, and it’s key to shaping the future of communities. Census statistics are used to determine the number of seats each state holds in the U.S. House of Representatives and informs how hundreds of billions of dollars in public funds are allocated by state, local and federal lawmakers for public services and infrastructure like hospitals, emergency response, schools and bridges over the next 10 years.

The 2020 Census is open for self-response online at 2020census.gov, over the phone by calling the number provided in your invitation, or by paper through the mail.