Promoter: Question Isn't Will Pacquiao-Spence Sell Out, But How Quickly

Las Vegas, NV - Manny Pacquiao enters as the betting underdog for his next fight, though the smart money is on his return to Las Vegas producing a box-office hit.  The record-setting eight-division champion is set for his first fight in more than two years as he faces unified WBC/IBF welterweight titlist Errol Spence (27-0, 21KOs).

As previously reported by BoxingScene.com, their August 21 Fox Sports Pay-Per-View headliner will air live from T-Mobile Arena in Las Vegas. Select tickets will be made available for presale on Thursday before being released to the general public Friday. 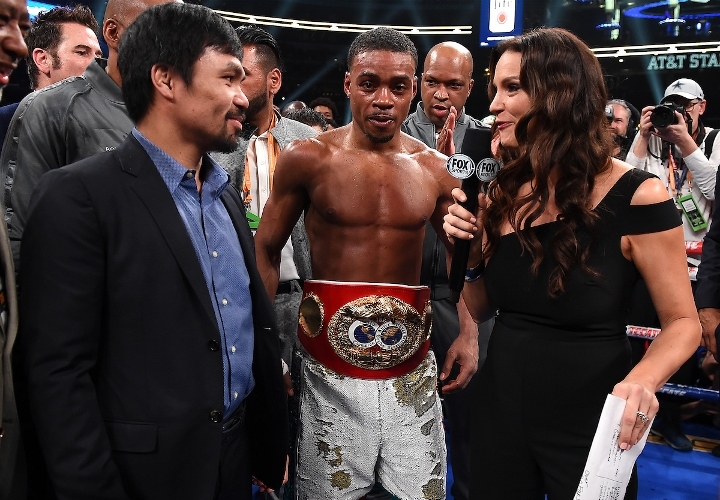 Pacquiao (62-7-2, 39KOs) fights for the first time since his 12-round split decision win over then-unbeaten Keith Thurman (29-1, 22KOs; 1NC) to win the WBA “Super” welterweight title in July 2019. Their bout topped a Fox Sports PPV event that aired live from MGM Grand Garden Arena in Las Vegas, marking the 15th time Pacquiao has played the venue in his legendary career.

The event produced a live gate of $6,260,275 from 11,436 tickets sold. Both totals slightly surpassed the Filipino southpaw’s previous outing, a 12-round unanimous decision win over former four-division titlist Adrien Broner at the same venue in Jan. 2019. Pacquiao-Broner generated $6,000,032 from 11,410 tickets sold.

Pacquiao was also part of the best-selling event in boxing history, when his May 2015 superfight with fellow all-time great Floyd Mayweather produced a staggering $72,198,500 in ticket sales.

Spence has yet to headline a major event in Las Vegas, though has proven to be a box office treasure in his own right.

The 2012 U.S. Olympian and unbeaten southpaw from Desoto, Texas has established himself as a leading attraction in his home state, including his most recent outing in a 12-round unanimous decision win over former two-division champ Danny Garcia. Their December 5 clash headlined a Fox Sports PPV event from AT&T Stadium in Arlington, the home to the NFL’s Dallas Cowboys where the fight generated $2,615,075 from 14,508 tickets sold—the total handicapped by social distancing restrictions.

Spence’s previous outing at AT&T Stadium came in March 2019, drawing an announced crowd of 47,525 for his 12-round shutout of previously unbeaten former four-division titlist Mikey Garcia. Wedged in between the two bouts was his WBC/IBF title-unifying 12-round split decision victory over Shawn Porter. Their September 2019 thriller produced a live gate of $2,257,155 from 12,671 tickets sold at Staples Center in Los Angeles.

“The supply chain for tickets and hotel rooms for Pacquiao-Spence fight week is about to get a major stress test," vows Brown.