Fort Worth, TX - Jason Thornburg described himself as having in-depth knowledge of the Bible. He believed he was being called to commit sacrifices, he told Fort Worth police before his arrest this week in a triple homicide of a man and two women whose dismembered bodies were found burned in a dumpster.

Thornburg, 41, also confessed to killing another man whose body was found in his burned Fort Worth home in May, and to killing his girlfriend in Arizona, police wrote in an arrest warrant affidavit. 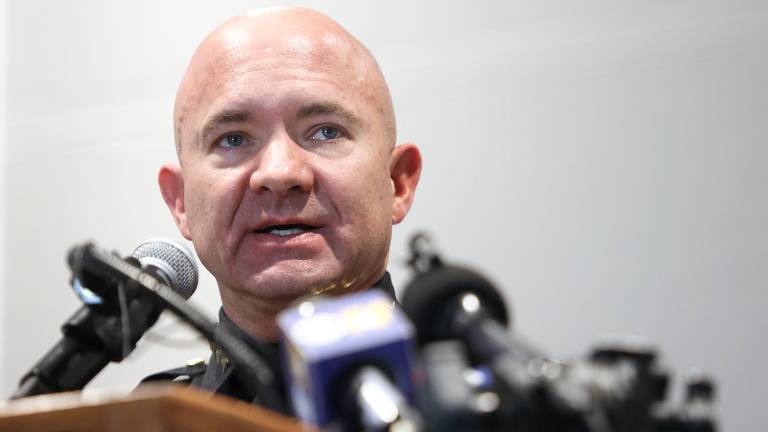 The Fort Worth police held a press conference on September 28, 2021, to give information on the arrest of Jason Thornburg. Thornburg is a suspect in the killing of three people whose burned and dismembered bodies were found in a dumpster. BY AMANDA MCCOY

David Lueras had been staying with Thornburg at a Euless motel for a short time, according to the warrant released Tuesday by Fort Worth police. Thornburg told police that earlier this month he sliced Lueras’ throat, cut him up into pieces in a bathtub and later placed his body parts in plastic containers. 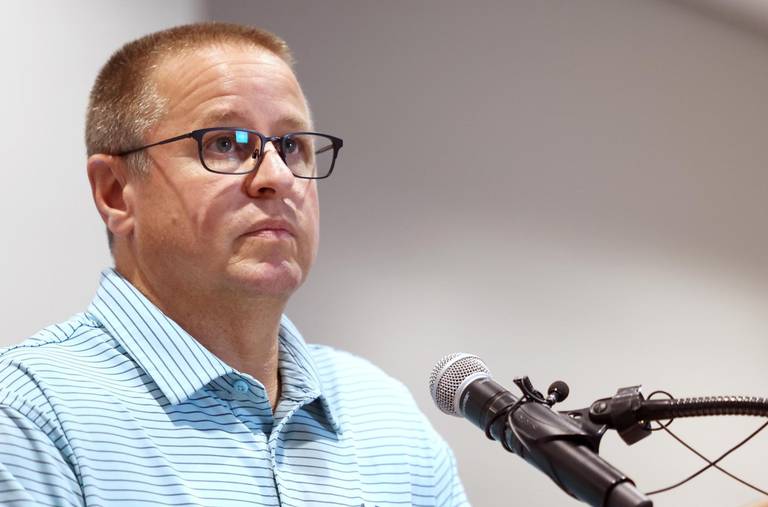 Fort Worth police explain how suspect in triple murder of dismembered victims was found.

Over the next few days, Thornburg similarly “sacrificed” two women when they came by his Euless motel room on separate occasions, the warrant states. Police have not released the women’s names.

On the morning of Sept. 22, Thornburg, wearing a full hazmat body suit, loaded up the plastic containers, drove to Fort Worth, dumped the dismembered parts in a dumpster in the 3100 block of Bonnie Drive and set it on fire, Fort Worth police said.

Video surveillance near the dumpster provided a lead that Fort Worth detectives used to track down Thornburg and arrest him late Monday at the Euless motel.

“Our collective hearts broke when we heard about this story,” Fort Worth Police Chief Neil Noakes said in a Tuesday afternoon news conference about Thornburg’s arrest. “It’s shocking. It’s unsettling. And we knew bringing someone to justice was paramount.”

In addition to the three bodies found on Sept. 22, Fort Worth police said Tuesday that Thornburg was a suspect in a May killing on Valentine Street where 61-year-old Mark Jewell’s throat was sliced and his house was set on fire.

In a Monday interview with detectives, Thornburg also confessed to sacrificing his girlfriend in Arizona. He identified her to detectives and police confirmed that the woman was reported missing. No other details were released by Fort Worth police on the Arizona case.

Fort Worth police have tentatively identified the two women who Thornburg confessed to killing in his Euless motel room, but said officials with the Tarrant County Medical Examiner’s Office would make the positive identifications. 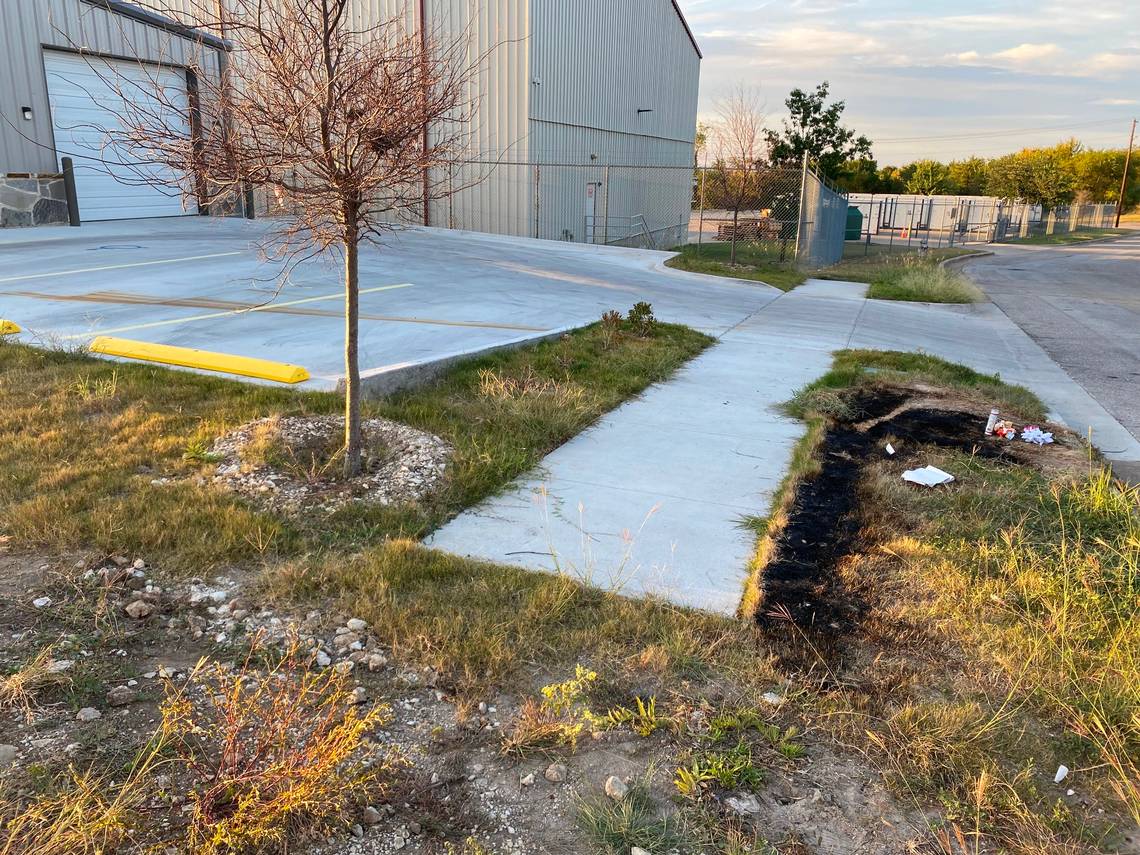 The dismembered bodies of three people were found in a burning dumpster in the 3100 block of Bonnie Drive in west Fort Worth on Wednesday, Sept. 22, 2021. Authorities removed the dumpster from the scene for investigation of the triple homicide. Emerson Clarridge

Fort Worth homicide Sgt. Joe Loughman said Thornburg had just casually known the women and he knew Lueras because he had been living with him in the Euless motel.

“He didn’t have an extensive violent history,” Loughman said, referring to Thornburg. “I don’t know why someone would do this.”

The warrant written by Detective M. Barron gave these details on the investigation and killings:

Thornburg said that Lueras showed up about five days before the bodies were found and stayed with him at his Euless motel. Thornburg believed Lueras needed to be sacrificed and killed him, he told police. Initially, he hid the remains in his room in trash bags before he bought Rubbermaid plastic tubs to store the body parts. 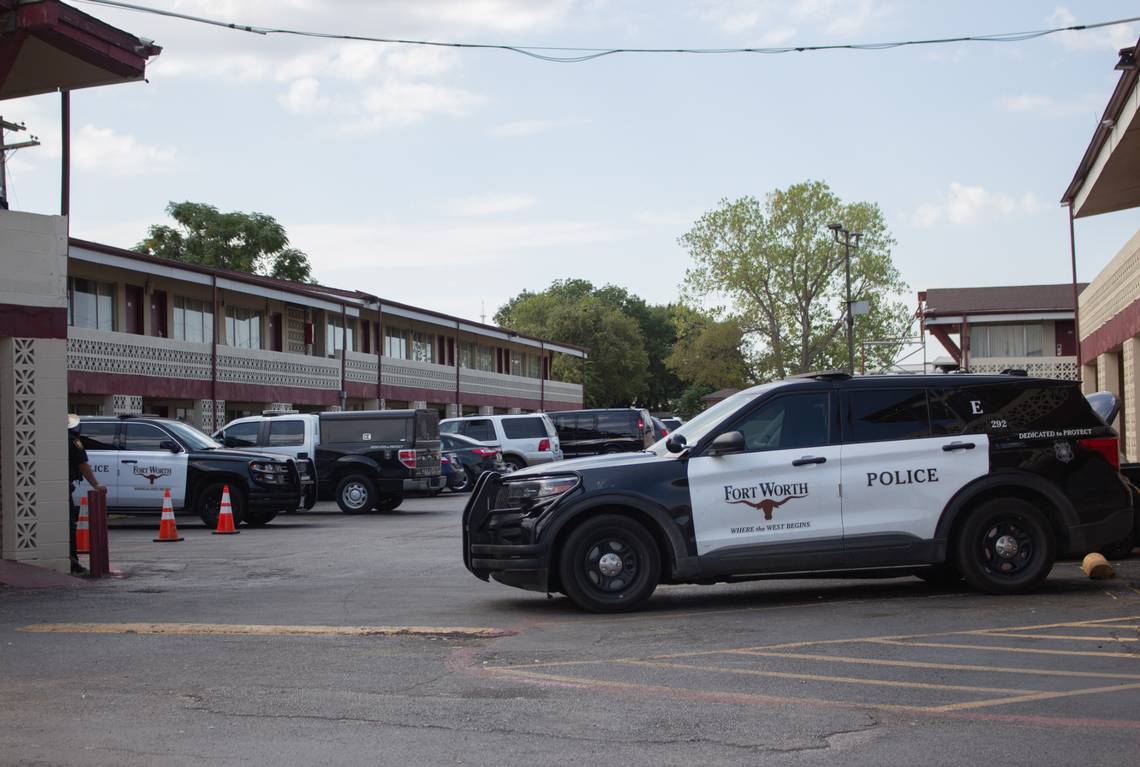 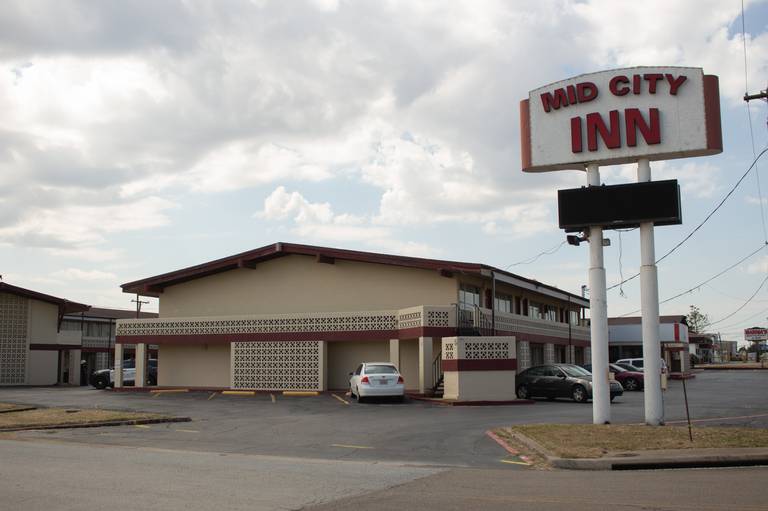 Fort Worth police were on scene investigating Tuesday in a room at the Mid City Inn, an extended-stay motel in the 1400 block of West Euless Boulevard in Euless, where the suspect in a triple homicide had been staying. David Silva Ramirez

About two days later, an acquaintance who Thornburg described as a very small Hispanic woman showed up at his motel room. He sacrificed her by cutting her throat, cut her in pieces and stored her body parts in the storage tubs, he said. Police said at a news conference Tuesday afternoon that while investigators initially thought the victim was a child, they later determined she was an adult woman.

A few days later, another woman who Thornburg knew arrived at his Euless motel room. He tried to stab her, but he ultimately had to strangle her, he told police. He cut her body in pieces and stored her remains in the plastic tubs.

Motel surveillance obtained by detectives showed a man at the Euless motel take several large containers from a motel room and place them in the back of a Jeep Grand Cherokee.

The man, who was later identified as Thornburg, was wearing a full body suit like those worn in jobs that involved drywall, painting or hazmat cleaning.

Thornburg drove away from the motel, but he returned and loaded more containers.

On his last trip to the dumpster, Thornburg ignited an unknown device, which started a large fire.

The surveillance video near the dumpster identified the SUV as a black Jeep Cherokee and detectives traced one to Thornburg, who had been a suspect in the killing of his roommate in May on Valentine Street in Fort Worth. Loughman noted that there were at least 7,000 Jeep Cherokees in the area, but detectives managed to track down the one that belonged to Thornburg.

As the investigation continued, detectives matched a tattoo found on a body part in the dumpster to David Lueras.

On Monday, Fort Worth detectives determined that Thornburg’s SUV was at an Arlington address, which was where detectives found the murder suspect and asked him if he would come with them for an interview.

Thornburg agreed to the interview and confessed to the killings, police said. He was allowed to briefly return to his Euless motel room, with police watching him, but he was then arrested, authorities said.

“We had to let him go until we secured a warrant,” Loughman said Tuesday.

Thornburg was booked into jail late Monday in connection with the killings of the three people whose burned and dismembered bodies were found last week in a dumpster near a Fort Worth business.

When asked why police waited a couple of days before they first released information on the triple homicide on Friday, Noakes said on Tuesday that he allowed homicide detectives to do their jobs.

“We took a certain path before we released any information,” Loughman said. 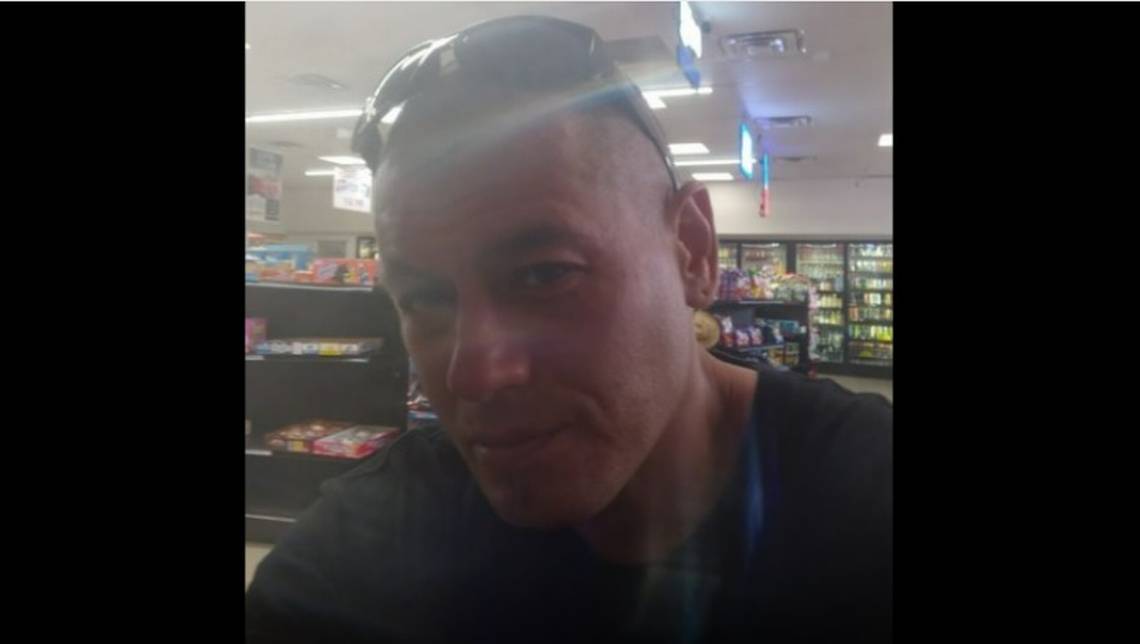 The dismembered body of David Lueras was found Sept. 22 in a burning dumpster fire in west Fort Worth. Two other bodies also were found. Courtesy: Fort Worth police

Lueras, 42, had returned to North Texas, where he had lived off and on for 25 years, to get away from someone, his cousin Aaron Torres told KDFW-TV.

“I know that he was scared and I know he knew somebody was after him to get him,” Torres told KDFW. “He wouldn’t tell us their names.”

Lueras was known to frequent the Dallas area and has some ties to the Hurst, Euless and Bedford area, according to police. He also had home addresses listed in Keller and Midlothian.

Fort Worth police were on scene investigating Tuesday at Thornburg’s room in the Mid City Inn, an extended-stay motel in the 1400 block of West Euless Boulevard, where police said the killings happened.

Some guests of Mid City Inn said they had no indication of Thornburg’s presence or any extraordinary altercation coming from his room within the past few days. Guests directly next to Thornburg’s room — which was at a corner — were unavailable for comment. 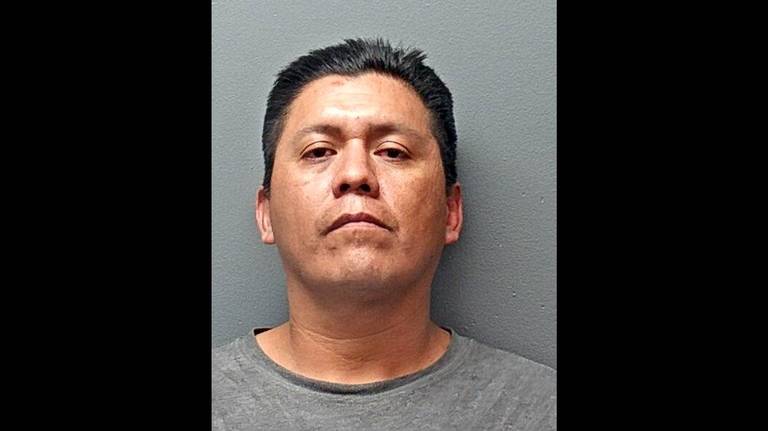 Jason Thornburg, 41, of Euless, Texas, was arrested late Monday in connection with a Fort Worth triple homicide. COURTESY: FORT WORTH POLICE

Some residents gathered outside their rooms and watched police, but many did not know that Thornburg was arrested there.

One resident said that most residents in the inn keep to themselves, and that police presence isn’t an infrequent occurrence.

Thornburg was sentenced to two years in prison for evading arrest with a vehicle in Wise County and was imprisoned on Nov. 15, 2018, according to Texas Department of Criminal Justice records.

“According to the report there was nothing unusual, or out of the ordinary of a basic arrest, for a charge of that type,” Rhome Police Chief Eric Debus said in a Tuesday email.

Thornburg was released to mandatory supervision on May 16, 2019, and discharged from parole on June 11, 2020, according to state records.