Affidavit: Dallas officer made $48,000 in alleged pyramid scheme through CashApp

DALLAS — A Dallas police officer has been arrested and 12 others are under investigation for their participation in what authorities call a pyramid promotion scheme.  One officer, Reginald Jones, turned himself in to the DeSoto Police Department after a warrant was issued Friday for his arrest.

According to the arrest affidavit, the Dallas Police Department’s Public Integrity Unit received a complaint on Sept. 30, 2020 from another Dallas officer saying Jones was "... promoting a pyramid scheme by recruiting individuals to pay money to participants and then recruit new participants in order to receive money in return.”

Ofc. Reginald Jones turned himself in to DeSoto PD Friday. Dallas PD said he recruited more than 150 people to participate in a gifting or blessing circle.

In March 2021, Dallas police interviewed Jones. The affidavit said Jones told them "... participants paid $100, $500, or $1,400 into gifting circles through the cellular application CashApp and bring in at least two participants in order to be blessed by eight people."  It goes on to say no goods or services were exchanged for the money people invested.

Dallas police analyzed Jones’ cell phone data and said they found multiple messages between Jones and three civilians he met while he was on duty. The affidavit said he recruited the men and asked them to send him money via CashApp. 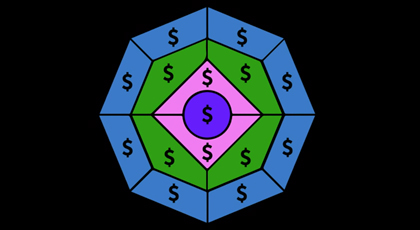 According to the affidavit, Jones involved at least 159 participants and made more than $48,000 in money transfers.

Blessing circles or blessing looms sound good because they promise quick cash if you invest a little bit of money and recruit others to invest, but authorities said if it sounds to good to be true, it probably is.

Aaron Wiley, a former U.S. prosecutor, talked to WFAA about the legality of the blessing circles.

“If it was associated with a good or something in exchange and paying for that then that’s one thing but if you act like money is coming out of nowhere like the more people you have the more you are going to make... well that’s illegal,” said Wiley.

The blessing circle works like this: someone asks you to invest $100, but you have to recruit two people to also invest and they recruit two more people and so on. You are promised that in a few weeks that $100 will be $800. But authorities said it’s a pyramid scheme, and it’s illegal because the bottom falls out.

Several federal agencies have issued warnings including the Federal Trade Commission and the IRS.

Wiley said what makes this case more serious is that police are involved.

WFAA talked to some officers who participated and said they didn’t realize it was illegal, but Wiley said that isn’t really a defense and some could face jail time or be disciplined.