DALLAS - This week, Dallas city leaders should be getting a clearer picture of just what kinds of Dallas police case data were deleted during two data loss events this year.

The city of Dallas estimates more than 17,000 criminal court cases are affected by two separate data loss events at the Dallas Police Department.

One happened in March. A now-fired IT worker made a mistake that resulted in about four million files lost. 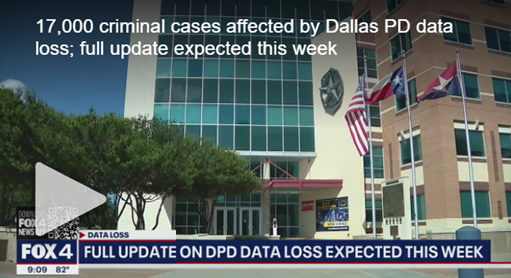 "So the absence of that information is going to impact some of these cases," he said. "And we could potentially see cases just thrown out altogether, right? I certainly would expect that there will be some cases that the prosecution cannot go forward."

Wilson says this situation is a mess for the district attorney’s office. Some of that data might be critical to convicting criminals.

"In some instances, it may have even taken away the ability to justify the initial arrest to begin with," he said.

The city claims the data loss was a mistake, but the FBI is reviewing the circumstances at the request of Dallas police.

"So right now, they are in what they call an assessment," Wilson said.

An outside firm is also conducting an investigation. Another city council committee will hear a presentation on what was lost and possible root causes on Thursday.

The city says of the 17,000 criminal cases affected, 1,000 cases are prioritized by the DA’s office.

"You’ve got to get more specifics," Wilson said. "I think you would expect the defense to argue that the state can no longer meet its burden of proof."