Donations stream in for hard-hit victims of storm

Dallas Area - Disaster response after Saturday’s tornadoes has shifted to relief efforts in Garland and Rowlett, and community donations are finding their way into the hardest-hit areas.

Federal help may not be far behind. Damage assessment teams from the Federal Emergency Management Agency and the state on Wednesday will review tornado and storm damage to homes, businesses and public infrastructure in Dallas County.

The Insurance Council of Texas on Tuesday released an estimate that insurance claims for the storms would reach $1.2 billion, with the biggest losses in Garland and Rowlett. That figure, which is likely to rise, would make it one of the most costly weather disasters in North Texas. The costliest, when adjusted for inflation, was the $1.5 billion storm known as Fort Worth’s Mayfest storm in May 1995.

Garland and Rowlett made more progress toward recovery Tuesday. All roads in Garland were open, less than 72 hours after an EF4 tornado carved a path through both cities. And people are offering their help directly, Garland Mayor Douglas Athas said.

“You’ll see volunteers going up and down those streets offering food, water or whatever,” Athas said.

There have been no reports of looting or vandalism in the affected area, which is in far southeast Garland, police said. Increased patrols are a priority.

Bud Smallwood, a resident who sustained minor damage to his home and remained in the hardest-hit area, has noticed a heavy law enforcement presence.

“I’ve been sitting here until 12:30 in the mornings watching for anything suspicious,” Smallwood said. “Police have been up and down this street every night. I give them all the praise in the world for protecting the citizens in this neighborhood.”

Smallwood said gas lines to his house were restored Monday afternoon. But he remained among the 1,000 without power as Garland Power & Light crews worked to repair a line of snapped utility poles along nearby Lyons Road.

Though reopened, streets weren’t obstacle-free. Numerous power trucks inhabited the area, and totaled cars were plentiful on the sides of the roads.

Garland also updated its damage totals Tuesday. The city reported 783 homes were damaged. Of those, 547 have been deemed safe and 236 are uninhabitable. The Landmark at Lake Village West apartments near Interstate 30 remained off limits.

In Rowlett, officials said that they had stabilized the Martha Street water tower in the southeast part of the city but that they would maintain a 300-foot perimeter around it.

Downtown Rowlett has become a tornado relief epicenter, with two churches on Main Street among those collecting and distributing donations to still-blockaded neighborhoods.

Kay Nicholson, the relief effort coordinator at First Baptist Church of Rowlett, was interviewing walk-ins, then leading them into a large area that held goods.

Dry food, water, personal hygiene kits, toys and strollers were among the many donations.

“Right now, a lot of them don’t even know what their needs are,” Nicholson said. “We’re just trying to love on them as they come in.”

Next door at First United Methodist Church, the Rev. Dretha Burris was dealing with financial needs.

“What is the criteria?” a volunteer asked, referring to a victim who had come for help.

“Do they need it?” Burris asked.

“Then that’s the criteria,” the pastor said, handing out gift cards for the volunteer to give the victim. Minutes later, a different volunteer brought Burris a donated stack of gift cards.

The pastor helps those who are reluctant to accept help swallow their pride.

The helpers were getting relief, too, after three long days. The churches were, for members of the Community Emergency Response Teams and others, a place for rest and a hot meal.

Sleeping at the church

After the storms, people were told that if they left the area south of Interstate 30, they would not be allowed back.

So while Tuesday was the first time they could extend their arms to donations from churches outside the strike zone in Garland, Living Hope Baptist Church pastor Troy DeFeo and his twin brother and associate pastor Eric slept at the church to maintain a community base.

On the edge of the stricken area, the church had its power back Sunday. It offered warmth, a cellphone charge and an established pantry.

DeFeo’s church helped reunite a family and took wood to a 92-year-old who didn’t want to leave her home.

“We want to be an outreach for this side of the community,” the 44-year-old pastor said, thanking churches that came to their aid Tuesday when roadblocks were taken down. “Several of our families here at the church have lost everything.” 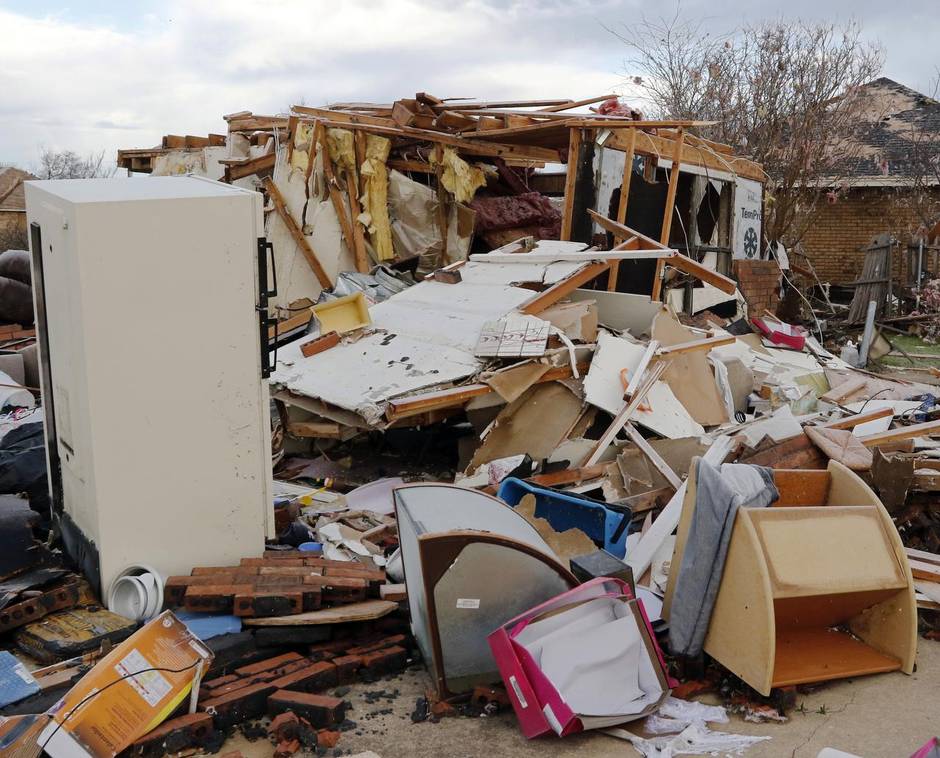