Dallas, TX - A judge dismissed the lawsuit to oust Dallas County District Attorney Susan Hawk on Friday, putting a lid on a months-long saga that called her mental competency into question.

Hawk exhaled audibly when Judge David Peeples issued his ruling from the bench immediately after the 90-minute hearing.

His decision cannot be appealed.

She appeared to tear up briefly when the judge announced his decision. She hugged her attorneys and each of the employees who showed up in court to support her.

"Of course, I'm emotional," she said. "Just having this behind me, behind all of us. It was like a black cloud that's over our office. It needs to go away because we are doing fantastic things."

Fired Dallas County prosecutor Cindy Stormer, who originally filed the lawsuit to remove Hawk, said she did so for the citizens of Dallas County.

"I wish Ms. Hawk the best of luck," she said. "I'm glad she has got the treatment that she needed."

Ellis County District and County Attorney Patrick Wilson, a Republican who was appointed to pursue the case on behalf of the state, said that he had done his due diligence.

Stormer filed the lawsuit against Hawk in October.

The DA had just returned from a two-month stay at a psychiatric hospital to receive depression treatment. Her hospitalization followed a tumultuous first few months in office, in which she acted bizarre, fired key employees under controversial circumstances and acknowledged going to rehab for prescription drug use during the campaign.

An old and rarely-used law allows elected officials to be removed for three reasons: incompetence, official misconduct or drunkenness on or off duty. Wilson asserted that Hawk should be removed under the first two avenues, citing her mental health, prescription drug use and erratic behavior a key issues.

But to prevent frivolous lawsuits against elected officials, the law assigns the judge to act as a gatekeeper.

Peeples, a Republican from San Antonio appointed to preside over the case, decided to hold a hearing before ruling. Had he allowed the case to move forward, lawyers likely would have deposed key witnesses and tried to uncover Hawk's medical records.

That process would have racked up a bill for Dallas County taxpayers, who voted Hawk into office just over a year ago. Peeples, who issued his ruling without comment, indicated during the hearing that he'd take that into consideration.

Hawk's defense team, which included Dan Hagood, Charla Aldous, Doug Alexander and Brent Walker, argued that the DA's depression diagnosis and treatment does not make her unable to do her job.

Alexander, an appellate lawyer from Austin, said that the portion of the law that allows an elected official to be found incompetent because of a mental or physical "defect" is an outdated notion from the 19th century.

In 1879, he said, Greg Abbott might not have been able to be governor of Texas because he uses a wheelchair, but today, that presents no problem.

Similarly, he said, people with mental illnesses today go to the Austin State Hospital for treatment. "1879, what was the name of that institution? The State Lunatic Asylum," he said.

Just as Abbott is a "hero" for not letting the stigma derail his career, he said Hawk should be one too.

'Nothing but a PR campaign'

Wilson, the prosecutor for the state, made the case that Friday's hearing was not to debate the handling of mental illness, but simply to determine whether Hawk's situation met the legal threshold for removal.

He said the judge should allow the case to proceed so the lawyers could sort out conflicting facts given by former and current DA employees.

He asked why the defense provided 12 affidavits from employees who supported Hawk, but none from Hawk herself. He said the allegations against her included prescription drug abuse, "yet she has simply crafted a narrative that she was suffering from depression."

"I submit to the court that this is nothing but a PR campaign."

He also took issue with the fact that Hawk took weeks off work to seek treatment. On the morning that Dallas County commissioners appointed him to handle this case, he said, he was "unconscious on an operating table" because of a "physical defect."

"Yet, that afternoon, I was running my office," he said. "It's absurd that in the year 2016 we can suggest that someone can just disappear for 11 weeks from the office of something as important as the Dallas County District Attorney and that's OK."

Peeples questioned whether the removal case was about punishing Hawk for her past misdeeds or about ensuring her mental fitness now. He ultimately ruled it was about the latter.

The same judge previously presided over the unsuccessful suit to remove Travis County's DA, who was arrested for drunk driving in 2013.

Between the two cases, "you're left to get a sense that this judge is, at the very least, skeptical that mental health or addiction issues alone are a ground that truly justifies removing an official from office, said Potter County attorney Scott Brumley, who has handled ouster suits.

A path toward re-election?

Dallas County Republican Party Chairman Wade Emmert said Friday he'd be happy to have her on his ballot. His party also sent out an email celebrating Hawk's victory as a "fresh start" and claiming that Hawk had been "vindicated."

But Hawk would have an uphill battle to secure re-election. Aside from the personal troubles that dominated her first year in office, she's a Republican in a county controlled by Democrats, several of whom are already contemplating a bid for her seat.

Balido declined to comment Friday. Wirskye, who now works for the Collin County DA, said he wishes "the best for everyone in the Dallas County DA's Office."

Though the lawsuit itself is over, Brumley said Hawk's office will now have to try to repair the damage to her reputation.

"The case itself was bizarre from the outset," he said. "That it would end this way seems fittingly unusual as well." 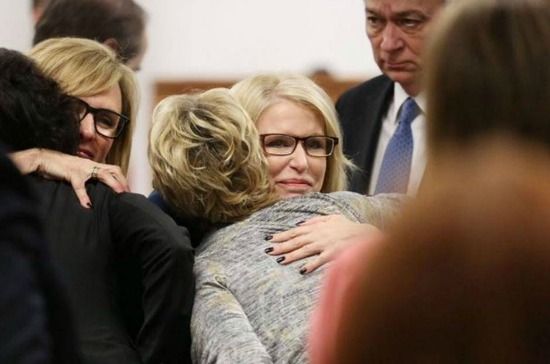