M. Christopher and Co. sold the last houses in its Mallard Reserve neighborhood in Rowlett about six months ago.

Now the Dallas-area builder is setting up shop again along Scenic Drive to rebuild houses destroyed or damaged in the Christmas weekend tornadoes.

“We just signed the contract on the first of nine houses we are going to be working on,” said M. Christopher executive Tony Prutch. “Our goal is to give these people some help through a difficult situation.

“We built the entire subdivision and know everyone here,” Prutch said. “We are in a position to help them.”

Other North Texas residents seeking qualified contractors for repairs may have to get in line.

Labor shortages were already one of the biggest issues facing the local homebuilding industry before the storms damaged hundreds of houses.

Rebuilding and repairs to tornado-ravaged neighborhoods will put more of a pinch on contractors, industry leaders say.

“The labor demands put additional strain on a system that is already short of workers,” said Ted Wilson of Residential Strategies, a Dallas-based housing consultant. “Of course there are storm-chaser companies — good and bad — that will provide some influx of labor, as well as a lot of volunteers trying to help out.

“But it is still a monumental job,” Wilson said.

The construction surge has created one of the tightest labor markets in years.

Finding adequate skilled labor for home construction has been a nationwide challenge for the housing industry for more than a decade.

The situation became critical in some markets after the recession.

“A lot of workers left the business and never came back,” Wilson said.

Remodeling contractors who already have a long list of jobs say that the storm work could be a challenge.

“It will put pressure on the labor shortage,” said Carla Ivey Giese, president of the Dallas chapter of the National Association of the Remodeling Industry.

Giese said homeowners need to be wary of unqualified contractors.

“One of the problems we run into in a situation like this is we have a Chuck in a truck showing up that’s unskilled,” she said. “Since there is no license in the state of Texas, there is nothing to regulate the builders.”

John Collins, whose 2-year-old Rowlett house was destroyed by the storm, feels lucky that the builder agreed to rebuild his four-bedroom house that the tornado smashed.

“I don’t know where I’d be right now without them to get my house rebuilt,” Collins said. “It would be a nightmare to figure out with the shortage of qualified people.”

Collins’ family members huddled in a kitchen pantry while the storm practically leveled their house.

This week, work crews were busy hauling off the debris while workers with M. Christopher scoped out the situation.

“The building company owner called me after the storm and said, ‘What can I do for you?’” Collins said. “They sent a truck out that day and five guys to help us.

“They aren’t just doing it for the business — they care about us.”

Collins’ house is a total loss.

“We’re taking it all the way down,” Prutch said. “Only the slab will remain when we are ready to start over.”

He said replacing the wrecked house after the site is cleared will take at least six months.

“We should have work on another house here approved by this afternoon,” Prutch said. “The goal is to show the neighborhood it’s coming back.”

“This was a high-end neighborhood, even if it doesn’t look like one now,” he said.

Prutch recently moved from the street to a new house. His family’s old residence is one of the structures that will have to be demolished and rebuilt.

“All these people are my friends, and I care about what happens,” he said. 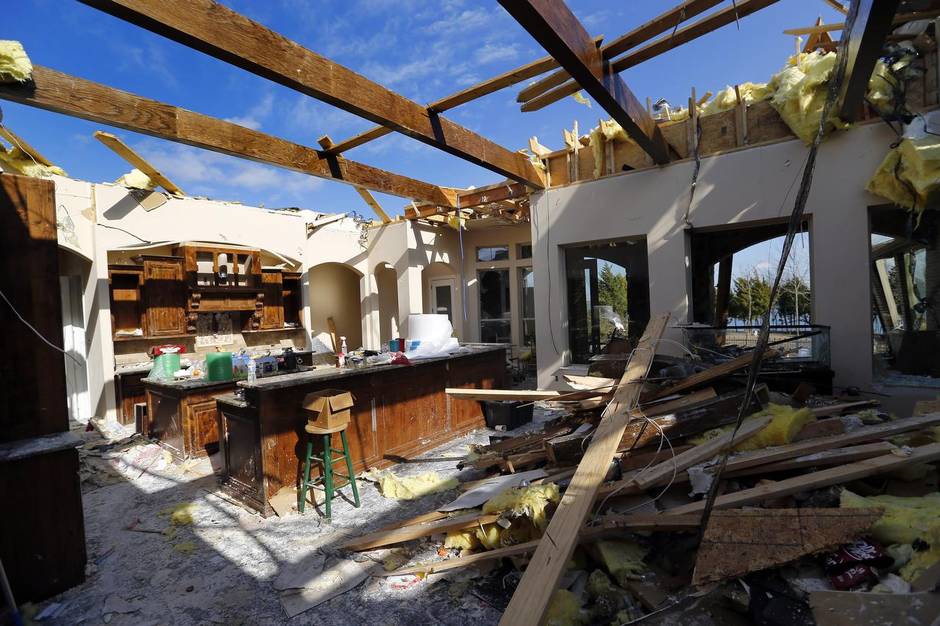