Could a deck park rejoin and rejuvenate the Oak Cliff neighborhoods that I-35E tore asunder?

Oak Cliff - On Feb.1,1962, former Dallas Mayor R.L. Thornton set off fireworks to commemorate the opening of a new stretch of Interstate 35E in Oak Cliff

that would bear his name, calling the freeway “essential to the future progress of the city.”

Those eight lanes of gleaming white concrete had begun their plunge through vibrant Oak Cliff neighborhoods the previous decade, dividing communities along the way in the name of economic growth.

While the interstate, now grayed with the years, did bring development, the places it carved through on its path to the suburbs saw their fortunes decline — victims of the damaging impact that highways wrought on inner-city neighborhoods around the country.

Now, there’s renewed hope that two of those neighborhoods — one west of I-35E that has hobbled along since its days as Oak Cliff’s commercial center; the other on the east side and ravaged by decades of concentrated crime and poverty — might be stitched back together and see the door open to new opportunities.

The tool to begin the healing process and help expand the recent economic rebound in north Oak Cliff to other parts of southern Dallas would be a deck park between downtown and the Dallas Zoo — just north of the site where Thornton stood a half-century ago and hailed the highway.

The park, which has yet to be funded, is included in plans for the $626 million Southern Gateway project to expand I-35E. Regional transportation officials voted last week to fast-track the project.

“The psychological impact and the physical impact of the freeway is so great that … some people don’t even realize that the other side of the freeway is still Oak Cliff,” said Paul Carden, an area resident who has pushed for inclusion of a deck park in the plans. “I see it as a way of giving Oak Cliff a shot to have its redevelopment opportunities.”

Backers of the plan are confident the new green space could provide a foothold for new investment, following the lead of the Klyde Warren deck park downtown.

Word of the grand vision has spread slowly through the neighborhoods adjacent to I-35E in north and east Oak Cliff. While residents welcome the idea of bringing a deck park to an area in need of open spaces, they’re skeptical that it would provide enough lift to overcome decades of neglect.

The view on Jefferson

On Jefferson Boulevard, a few blocks west of I-35E, strollers, shelves and appliances spill onto the sidewalk from a thrift store near a payday lender, a money transfer store and a mobile phone retailer. Down the street, the historic Oak Cliff United Methodist Church is vacant and up for sale.

The stretch of road near Marsalis Avenue was once the heart of Oak Cliff’s bustling commercial center, home to one of the city’s first J.C. Penney stores as well as other department stores and grocers that drew in the neighborhood’s affluent shoppers.

The solid wood beams and embossed tin ceilings inside the former J.C. Penney at 611 E. Jefferson speak to the building’s former grandeur. Bedding, clothes, dishes and other housewares still pack the store, but these days its customers are the city’s poor and homeless, who can get goods there for free.

The store’s manager, Cleo Sims, has spent the last 20 years on Jefferson and has seen it decline even as investment has flowed to other parts of north Oak Cliff, including the thriving Bishop Arts District.

“We need some North Dallas stuff over here, you know what I mean?” said Sims, who manages the store for the nonprofit Dallas County Community Action Committee. “North is coming south, slowly, but we need more. A park is fine, but we need other things. Like decent grocery stores, a nice cafe.”

Katherine Homan, 75, remembers shopping at the J.C. Penney on Jefferson decades ago, but she said that version of the neighborhood has long since vanished.

Instead of buying her groceries in the neighborhood, Homan, who has lived in the East Kessler area for 40 years, drives to Oak Lawn, while some of her friends head for Cedar Hill.

She sees the arrival of the interstate, which destroyed a swath of homes in its path and devalued nearby properties, as the start of the area’s downturn.

“Pretty soon we had lost everything we had, and you were having to leave Oak Cliff to do anything,” she said.

Homan is one of the community members, along with Carden, who helped push for a deck park as part of a plan to expand I-35E between downtown and U.S. Highway 67.

She said that the highway was built for a car culture that’s losing relevance, and that the park would help make the neighborhood more walkable and restore some green space.

While the Jefferson Boulevard corridor and neighborhoods immediately west of the highway have scraped by in the decades since the arrival of I-35E, the east side has seen a greater fall.

Dilapidated wooden homes, many of them boarded up with plywood, are scattered through the area stretching several blocks east from the interstate. The area’s median income of $13,558 is a quarter of the countywide figure, and violent crime is significantly higher than in areas west of the highway.

The neighborhood is home to Oak Cliff Cemetery, the city’s first public cemetery and the resting place of historic figures including Leslie Stemmons, a prominent businessman who donated much of the right of way for what would become Stemmons Freeway.

The area is also home to numerous long-established churches and to a Dallas school district magnet program.

But the few businesses in the neighborhood are mostly auto shops, gas stations or fast-food restaurants.

Back on Jefferson Boulevard, on the other side of the highway, opinions vary widely on what a new park would mean.

Some worry that it would be tainted by the graffiti, homelessness and blight that lurk throughout the community.

Others worry the park’s success could bypass those who live nearby, bringing in residential and commercial developments that would drive up prices and force out longtime residents or transient populations drawn by the area’s affordability.

“More parks are always great. I know we need more baseball fields — we don’t have any,” said German Peña, owner of The Garage Sale, a furniture and appliance store on Jefferson. “But when you’re coming in and fixing up an area, that can actually push the people who already live in that area out. You’re making it very unaffordable for the average person in Oak Cliff.”

Inner-city highways, with the smog, noise pollution and physical barriers they create, are notorious for driving down property values and thwarting development in the adjacent areas.

A deck park wouldn’t undo all of those problems, but it could be a positive first step, especially when paired with the nearby Dallas Zoo, toward reversing decades of decline.

There are still several hurdles the deck park plan would need to clear before becoming reality. The state would have to sign off on funding for the larger Southern Gateway project, and some combination of city dollars and private donations would be needed to pay for the park, which is expected to cost at least $30 million.

But there is hope, or at least a sense that something has to change.

“The buildings over here are dilapidated and so old … the whole community needs to be upgraded,” said Paul Conner, owner of Quality Furniture on Jefferson. “The park would be walking distance. We’re a couple of minutes from downtown. … If Bishop Arts is expanding and everything else is being upgraded, why would you just stop there?” 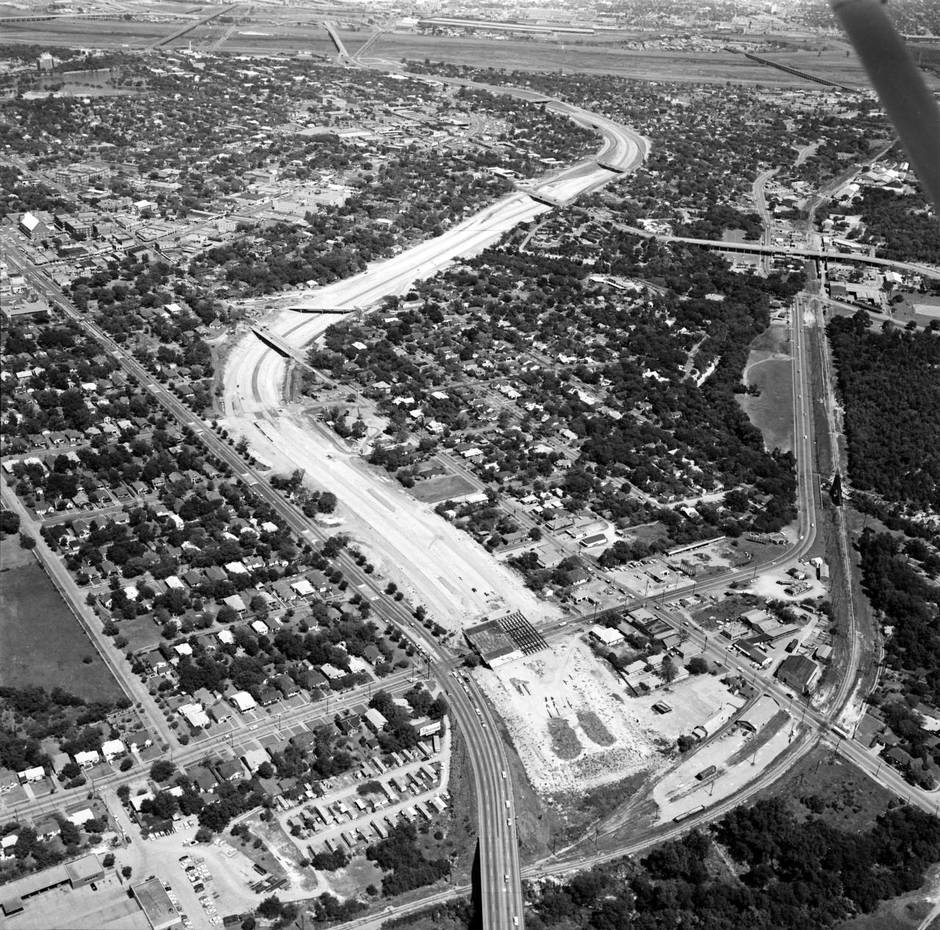 An aerial photo shot during the construction of Interstate 35E in 1961 graphically captured how the project gashed the community in two. Now plans for a deck park similar to Klyde Warren Park in downtown Dallas has some wondering if some of the damage can be undone.