North Texas - Two felons from North Texas were sentenced to more than a century in prison for robbing four Whataburgers, three gas stations and a Jack-In-The-Box restaurant in 2014.

Jesse Lee Bell, 32, of Duncanville and Deundrae Lyndell Miller, 24, of Mesquite were convicted for the month-long crime spree by a federal jury in July, the U.S. attorney’s office said.

This week the men were sentenced to more than 115 years in federal prison.

The string of armed robberies all occurred in June 2014. They were arrested June 24, 2014, as they fled a Whataburger in Mesquite.

As our Kevin Krause reported last summer, the pair targeted fast-food restaurants with little or no customers.

Bell often acted as a lookout while Miller threatened restaurant employees with a “Western” looking pistol. The men targeted the safe first and then the cash register. They then locked the employees in a back room.

The men wore some of the same clothes during the robberies, including a “SEAL TEAM VI SPECIAL WAREFARE” hat and a Charlotte Hornets hat, prosecutors said.

Here are the five restaurants they robbed: 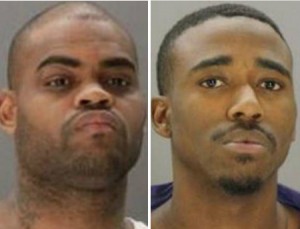