Dallas, TX - Jaelyn Morgan expected to spend Thanksgiving Day inside AT&T Stadium with her dad, Dale. She just never imagined how close she would get to the field.  “What’s really important, her dad said it, is the smile on her face,” said Dallas Cowboys owner Jerry Jones.

The 11-year-old was smiling despite the obstacles she faced to get there. Her family lives in Paradise, Calif. The town was virtually wiped out by recent wildfires. 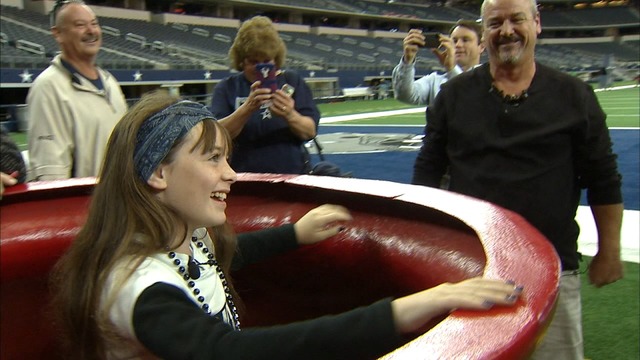 As flames approached their Cowboys memorabilia-filled home, Jaelyn snagged the family’s tickets to the Thanksgiving Day game on the way out. Their home was later destroyed.

“If the house was going to burn down, we want to make it as normal as possible and that’s kind of what the tickets represented,” said Dale Morgan, her father.

The Dallas Cowboys heard their story and offered to bring Jaelyn down to the sidelines, give her a game ball and put her front and center for the halftime show with Meghan Trainor.

“I tell you, why not? It’s Thanksgiving and for something like this to be part of this seems very appropriate,” Jones said.

It was not a normal Thanksgiving nor was it ever going to be. But for the family who is about to return to a community that will have to be rebuilt, the Cowboys community gave them something to smile about.