Arlington, TX - An Arlington police officer who helped save a man's life after a Dallas Cowboys game was reunited with the man on Wednesday.  Jeff Kempf suffered a heart attack outside AT&T Stadium after the Cowboys-Eagles game on Dec. 9. Sergeant Vanessa Harrison was on duty and stepped up to perform CPR.

The game ended in dramatic fashion when Dak Prescott threw the game-winning touchdown pass to Amari Cooper in overtime. 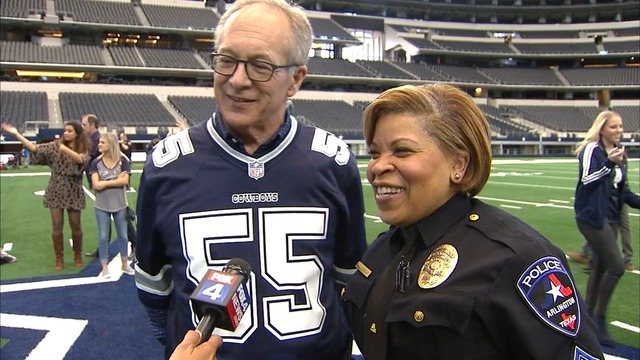 "As soon as Cooper caught the touchdown pass we hustled for the door and beat it out to the car and I was driving,” Kempf said.

Sgt. Harrison was posted at the intersection of Randall Mill and Collins, ready to handle postgame duties.

“Keeping in mind, 100,000 people just let out both pedestrians and in vehicles,” Harrison said.

Kempf's wife and a friend in the backseat realized, while stopped for the red light at that intersection, Kempf was suffering a serious medical emergency. The women began to scream for help.

"When I got there he was sitting in the driver’s seat unresponsive. My immediate thought was to get him out and start compressions,” Harrison said. "The whole time I was doing CPR his wife, her friend were praying over him. That just really stands out for me.”

Days later, Harrison got the news' she had prayed for – he had survived and was recovering.

"I still came to the games afterward. I got out of the hospital sooner than I thought,” Kempf said.