Dallas, TX - After hinting at his intentions earlier this month — with billboards across Dallas featuring a picture of his boots — Dallas City Council member Scott Griggs on Thursday officially stepped into the race to become Dallas’ next mayor.

“The mayors of the past have not worked,” he said.

Griggs, 44, is the seventh candidate to officially announce plans to succeed Mayor Mike Rawlings, and has a stronger existing foundation of support than the rest of the field.

A Dallas native who graduated from Richardson Pearce and went on to get a chemistry degree from Texas A&M and a law degree from the University of Texas, Griggs has been on the council since 2011, defeating two incumbent council members along the way (with an assist from redistricting). Like Rawlings, Griggs is term-limited in his current role.

While other candidates have personal wealth and connections, only Griggs and Dallas ISD trustee Miguel Solis have won recent elections.

And Griggs’ past campaigns — and his allies on the City Council — give him a voting base. 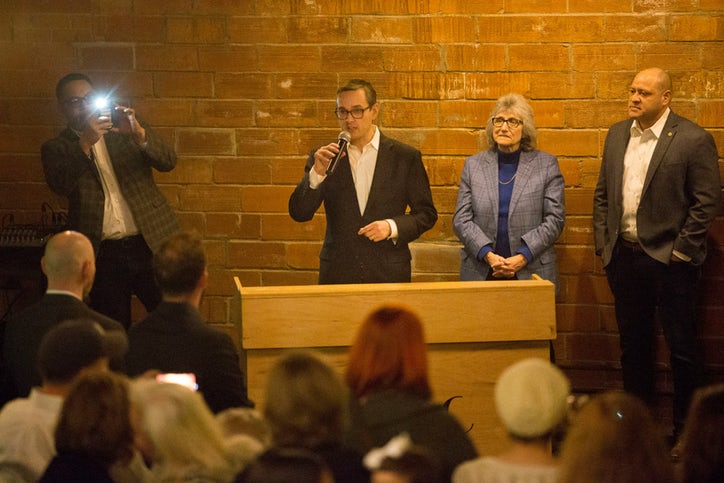 Three City Council members — Philip Kingston, Omar Narvaez and Adam Medrano — enthusiastically introduced him to the crowd during Thursday’s campaign launch, held at the D.E.C. on Dragon in the Design District.

Griggs’ announcement wasn't a surprise, despite the mysterious boots billboard tease. Over the past few months, political observers expected one of a trio of current and former city council members — Griggs, Kingston and Angela Hunt — to enter the race.

Hunt confirmed Thursday that the three had discussed which would run. She and Kingston played off that idea during their introduction of Griggs, taking the microphone together to ask each other if they were running for mayor.

During his speech, Griggs laid out his vision, asking for more money for police and firefighter pay, more affordable housing, more support for Dallas ISD, an updated transportation plan and economic development for all parts of Dallas. He touted some of the projects that he’d helped in his changing North Oak Cliff community, but also some that he stopped thanks to a collective effort from the community and his colleagues on the City Council, such as drilling on park land and the Trinity toll project.

Griggs said he wanted to end what he called “vanity projects” — for example, he has in the past criticized the city's expenditures on the Margaret McDermott Bridge. Griggs instead said the money ought to go to infrastructure and other needs.

But his experience at City Hall means he'll run on a record — for better or worse. And that will mean the airing of some of his baggage.

D Magazine reported that a flyer recently circulated reminding voters that Griggs was allegedly involved in altercation with then-assistant city secretary Bilierae Johnson in 2015. Griggs was alleged to have told Johnson that he would break her fingers if she published a meeting notice.

But after a police investigation, a grand jury declined to indict Griggs on the felony charge of coercion of a public official. Griggs, who denied any criminal wrongdoing, apologized to Johnson, and eventually supported her appointment to the city secretary’s role.

The filing period for the mayor and council races runs from Jan. 16 to Feb. 15; the elections are in May, with a June runoff if no candidate wins at least 50 percent of the vote.