Dallas, TX - A Dallas salon owner will spend a week in jail after she was found in contempt of court Tuesday for violating an order to close her salon during the coronavirus pandemic.

In addition, Shelley Luther was fined $7,000 for continuing to operate her business, Salon à la Mode, in violation of a judge’s temporary restraining order issued against the business.

Luther was taken into custody immediately after the hearing and booked into the Dallas County jail just after 4:30 p.m.

Like other businesses deemed nonessential, Luther’s Far North Dallas salon was forced to close March 22 after the county enacted its stay-at-home order. She reopened the salon April 24 despite that order, and tore up a cease-and-desist letter from County Judge Clay Jenkins at a demonstration the next day. 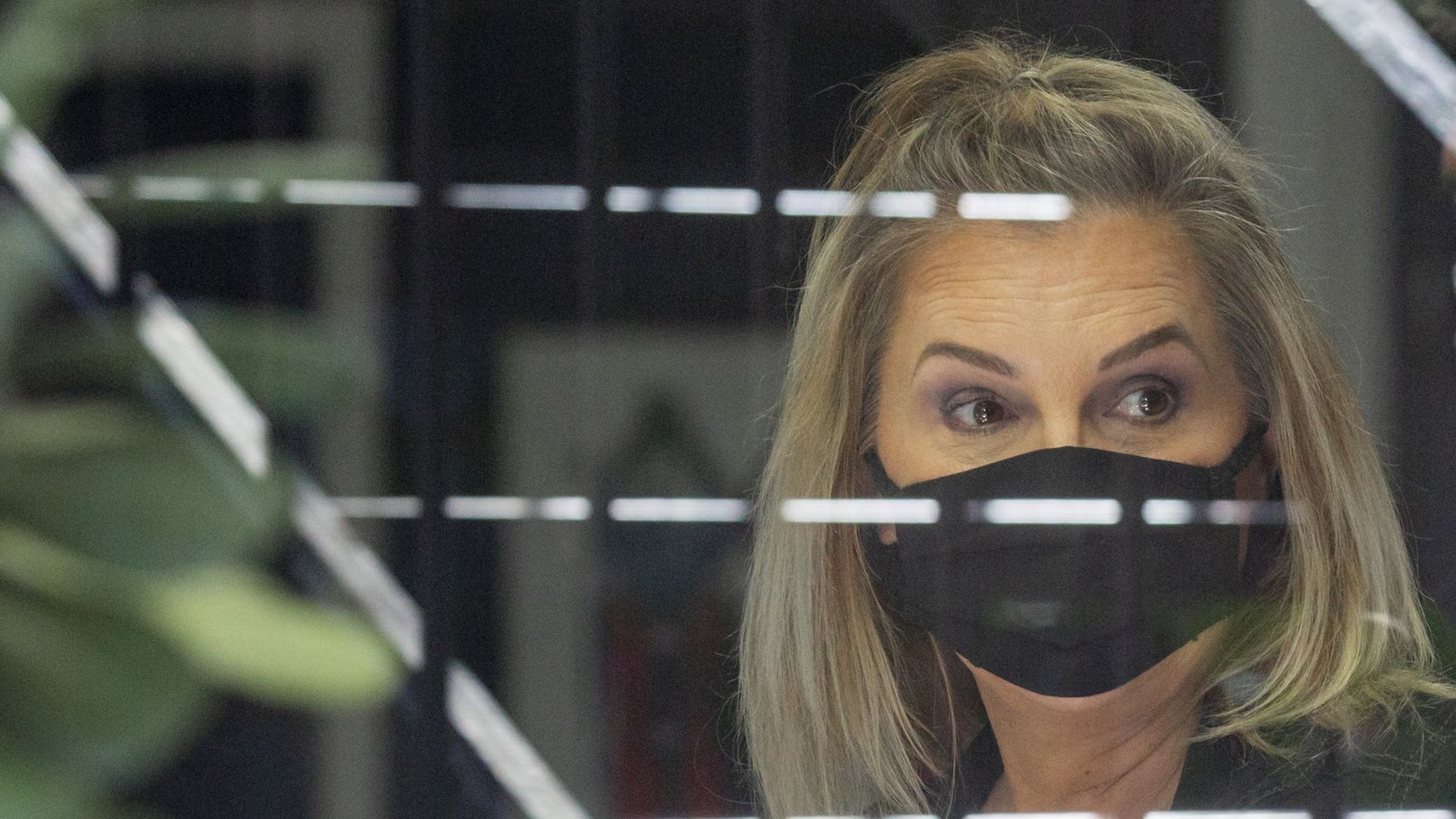 Shelley Luther glances out of the front window at her business, Salon a la Mode, in Far North Dallas on Wednesday, April 29, 2020. Luther opened her business on Wednesday morning despite a judge's orders on Tuesday for the salon to close following Luther's refusal to comply with emergency orders that required non-essential businesses to cease operations.(Lynda M. Gonzalez / Staff Photographer)

The temporary restraining order was signed April 28 by state District Judge Eric Moyé, but Luther continued to operate the business.

In a hearing broadcast live on YouTube on Tuesday, Luther said she had no choice but to open her business.

She said she hadn’t earned income since the county’s stay-at-home order was set in March. She applied for one of the federal loans aimed at helping small businesses but didn’t receive it until Sunday, she testified.

“I couldn’t feed my family, and my stylists couldn’t feed their families,” Luther testified, holding a phone to her face from the witness stand so the court reporter could hear her through a mask.

Before issuing his ruling, Moyé gave Luther an opportunity to apologize and promise not to reopen her salon until she was allowed to do so, saying he would consider levying only a fine “in lieu of the incarceration which you’ve demonstrated that you have so clearly earned.”

Luther, however, defended her actions to the very end.

“Feeding my kids is not selfish,” she told Moyé. “If you think the law is more important than kids getting fed, then please go ahead with your decision, but I am not going to shut the salon.”

Minutes earlier, Gov. Greg Abbott had announced during a news conference that barbershops and salons across Texas could reopen Friday.

Luther’s attorney, Warren Norred, expressed disappointment in the judge’s ruling as well as the timing of the governor’s decision, saying Abbott could have acted sooner to allow salons to open. Norred also said he was frustrated at how some businesses were deemed essential while others were not.

Abbott “could’ve swept all this aside and said ‘Whatever your occupancy is of your facility, take it to 25%,’” Norred said Tuesday evening. ”That gets the churches. That gets the salons. That gets the grocery stores. It gets the restaurants. It gets everybody, and it would’ve done the job."

During Tuesday’s hearing, Norred and Luther argued that the salon operated with safe protocols. The business normally has 19 stylists, but Luther testified that only a few had worked after she reopened. Each stylist wore a mask, she said.

Additionally, Luther said, she put hand-sanitizing stations in the salon and had customers wait outside until their stylist was ready. She kept the stations 6 feet apart, she said.

Kristen Monkhouse, an attorney for the city, said it didn’t matter how clean Luther kept the salon — she was in contempt of court the moment she opened the salon in defiance of the temporary restraining order.

Moyé agreed with the city. He told Luther he didn’t doubt her sincerity but said the “rule of law cannot and does not operate when individuals take it upon themselves to decide” what they can and cannot do.

Norred said his client’s salon would remain open before Abbott’s order goes into effect Friday. The business will be fined $500 per day as a result.

The county jail has had 248 inmates test positive for the coronavirus, according to statistics released Tuesday evening.