Dallas County - In southeastern Dallas County at Paul Quinn College on Tuesday afternoon, cars were stretched as far as the eye can see. Their drivers were waiting for a COVID-19 test, and hundreds would be turned away.

Although the National Guard administered over 500 tests that day (which was twice as many as they were doing just a couple weeks ago), Paul Quinn President Michael Sorrell says that they could not test another 500 more individuals.

With confirmed cases at 500 to 600 per day through the end of June and early July, the disease is spreading at an unprecedented rate. Hospitals have paused some elective procedures. Bars opened then closed. Restaurants had their capacities dropped. It’s all in an effort to re-flatten the curve of cases, and testing is part and parcel to prevention. Southern Dallas is home to many of the city’s most vulnerable ZIP codes, but with many uninsured and essential workers in these communities, they face a number of challenges to healthcare access. 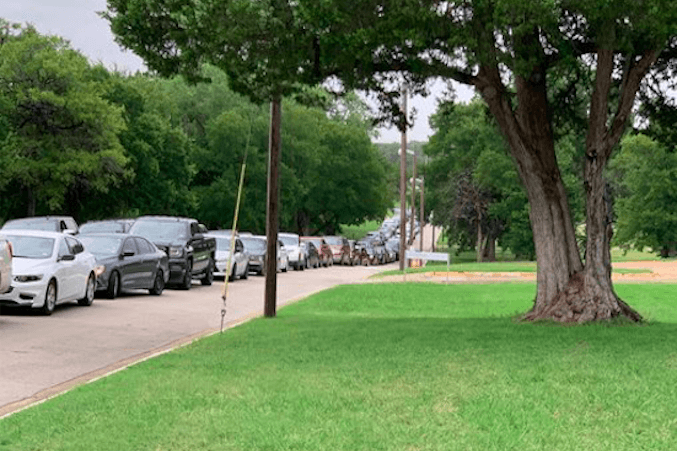 The federally run testing site at Paul Quinn is open on Tuesdays and Saturdays, offering free testing to asymptomatic and symptomatic residents as well as free masks and food. Over the past two testing days, Paul Quinn has tested over 1,000 people, but the original allotment of testing was only enough for 150 per day. Since testing began, they have administered 1,700 tests and given away 3,000 masks. Sorrell says the site will be funded at least through the end of July.

“It has been incredibly busy,” he says. “People are coming from all over the city.”

At the CitySquare free testing site in South Dallas, a similar scene is taking place. The site is being run by Kroger in partnership with the City of Dallas, and CitySqaure. It allows both walk up and drive-thru testing.

“We are seeing unprecedented demand,” says CitySquare President and COO Dr. John Siburt. “There are not enough tests at sites and not enough testing sites.”

The line of cars at CitySqaure stretched more than a mile around the nonprofit’s Opportunity Center, and the site has seen increased walk up traffic as well. Since the site opened in May, Kroger has provided 4,500 tests, with around 500 of those coming from the walk-up community. For weeks in May and June, there were only 70 tests given each day, but over the last two weeks there have been more than 200 per day, maxing out the site’s capacity. Its best day has provided 280 tests. For several days, they have had to turn individuals away in order to get the tests off to overnight shipping, according to Jeff Loesch, director of pharmacy for Kroger’s Dallas division.

The site prioritizes appointments and then tests as many walk-ins or drive-ups as they can. The last two weeks, all three of the sites run by Kroger have been maxing out capacity. “All three are in the same boat of turning away people,” Loesch says.

“I haven’t seen anything like it. There is a markedly greater demand,” Siburt says. In prior weeks, there was a regularity of the demand, but that regularity is gone. Residents from all over Dallas are coming to the site to be tested and creating the greatest demand of any week so far, which also slows down the speed at which results come back.

County Judge Clay Jenkins has expressed frustration with how long the test results are taking to return, a byproduct of increased demand. In some cases, results have taken up to 12 days to return, which limits the work the county can do in contact tracing.

At CitySqaure too, those being tested have the opportunity to drive through the food pantry, which has seen increased demand. About a third of those visiting are new visitors, a number revealing the depth of the economic crisis. The nonprofit hoped to be focusing on recovery efforts like employment assistance rather than pure relief and handing out food, but the continued rise in cases and accompanying economic downturn means they have to adjust.