Spence vs. Garcia Moves To December 5, AT&T Stadium in Arlington

Another big Pay-Per-View event is on the move and for the sake of allowing fans in attendance.  The anticipated unified welterweight title fight between Errol Spence and Danny Garcia has been pushed back two weeks from its originally intended date, now taking place December 5 at AT&T Stadium in Arlington, Texas—home to the NFL’s Dallas Cowboys. The bout will top a show to air live on Fox Sports Pay-Per-View.

Tickets will be made available to the general public, marking at least the second such occasion for a Premier Boxing Champions event since the pandemic.

"Having my comeback fight be in front of my hometown fans at AT&T Stadium is added motivation and a dream come true," said Spence. "It means even more because I'm going up against a great champion in Danny Garcia. I know people are looking out to see if I've lost a step or won't be at my best, but I'm 100% focused and everything is on point in training camp. I just can't wait to go out there on December 5 and put on a show." 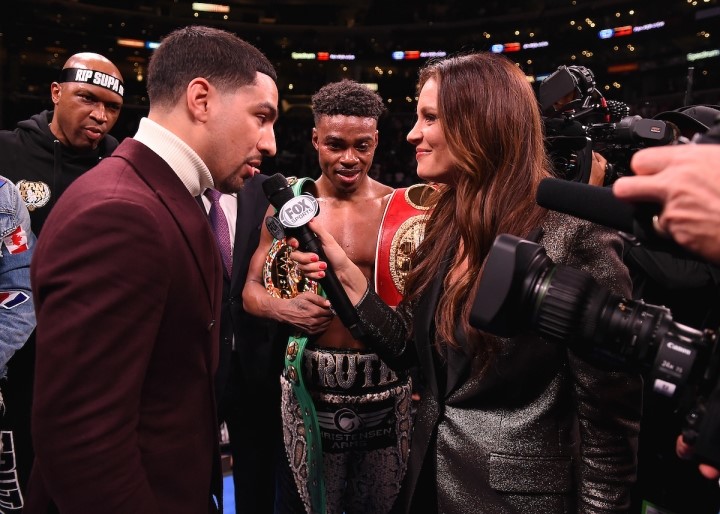 The bout was targeted to land on November 21, although a venue was never confirmed for the forthcoming showdown. PBC has run its events through two locations since returning in August—Mohegan Sun Casino in Uncasville, Connecticut for content airing live on Showtime; and Microsoft Theater in Los Angeles for all Fox Sports events.

That trend has changed beginning with the upcoming Showtime PPV headliner between Gervonta Davis and Leo Santa Cruz. Their bout was moved back one week, from October 24 to October 31 and which will take place at The Alamodome in San Antonio, with tickets already on sale—the first such occasion for any bout to air on U.S. since the sport as a whole returned to stateside airwaves on June 9.

Spence’s unified title defense versus former two-division champ Garcia will now mark the first Fox Sports event to take place outside of Los Angeles and with fans on site. PBC has aired four shows on Fox in primetime and two separate FS1 shows all from the Microsoft Theater.

Spence (26-0, 21KOs) will attempt the fifth defense of at least one welterweight title since winning his first belt in May 2017. The event will also mark his first fight as a unified titlist—having done so in a 12-round split decision win over Shawn Porter to add the WBC strap to his IBF title reign—and also the first since recovering from serious injuries sustained in a horrific single car crash last October.

"I'm very excited to get back in the ring," said Garcia. "This is going to be my second fight of 2020, even though it's been a crazy year with the pandemic and everything. I'm glad we're finally getting back to where we were and that we'll be able to bring this fight to the fans. This matchup is a mega-fight unification bout. It's my opportunity to reclaim my spot at the top in this division and become a five-time world champion. Training and sparring has been going really well. I'm extremely prepared for this already and it can't get here soon enough. Come December 5, I will be crowned unified champion!"

The event will serve as Spence’s second headliner at the famed stadium in the greater Dallas area. The unbeaten southpaw from nearby Desoto, Texas made his PPV debut at the venue last March, scoring a 12-round shutout over former four-division titlist Mikey Garcia. The event played to an announced crowd of 47.525 and selling north of 350,000 PPV buys.

"What an exciting event to look forward to as we welcome yet another championship fight to AT&T Stadium," said Dallas Cowboys Owner, President and General Manager Jerry Jones. "We are honored to once again partner with TGB Promotions and Premier Boxing Champions and provide a top flight boxing match between Errol Spence Jr. and Danny Garcia on December 5."

A similarly sized crowd is not expected due to current social distancing guidelines, but the spread-out stadium—which can seat (and stand) more than 100,000 for non-football events during healthier times—can still potentially draw in the vicinity of 20,000-25,000 fans given current standards. Current home games for the Cowboys allow the venue to sell at up to 25% capacity.

In addition to confirmation of the date change came the official announcement for the full undercard.

Unbeaten junior middleweight contender Sebastian Fundora (15-0-1, 10KOs) will face former title challenger Jorge Cota (30-4, 27KOs) in a scheduled 12-round title eliminator. The winner be among the many waiting in line for a shot at lineal junior middleweight king Jermell Charlo.

Former two-division title challenger Josesito Lopez (37-8, 20KOs) will square off with Francisco 'Chia' Santana (25-8-1, 12KOs) in a 10-round welterweight battle.