The Desoto, TX native Spence will return to the ring after two impressive performances on FOX Sports PBC Pay-Per-Views in 2019.

In March, he defeated four-division champion Mikey Garcia at AT&T Stadium by unanimous decision, before going to Los Angeles to unify welterweight titles in September by defeating Shawn Porter is one of the year’s best fights.

Tickets for the live event, which is promoted by TGB Promotions, Man Down Promotions, and DSG Promotions, are on sale now and can be purchased at SeatGeek.com, the Official Ticketing Provider of AT&T Stadium. 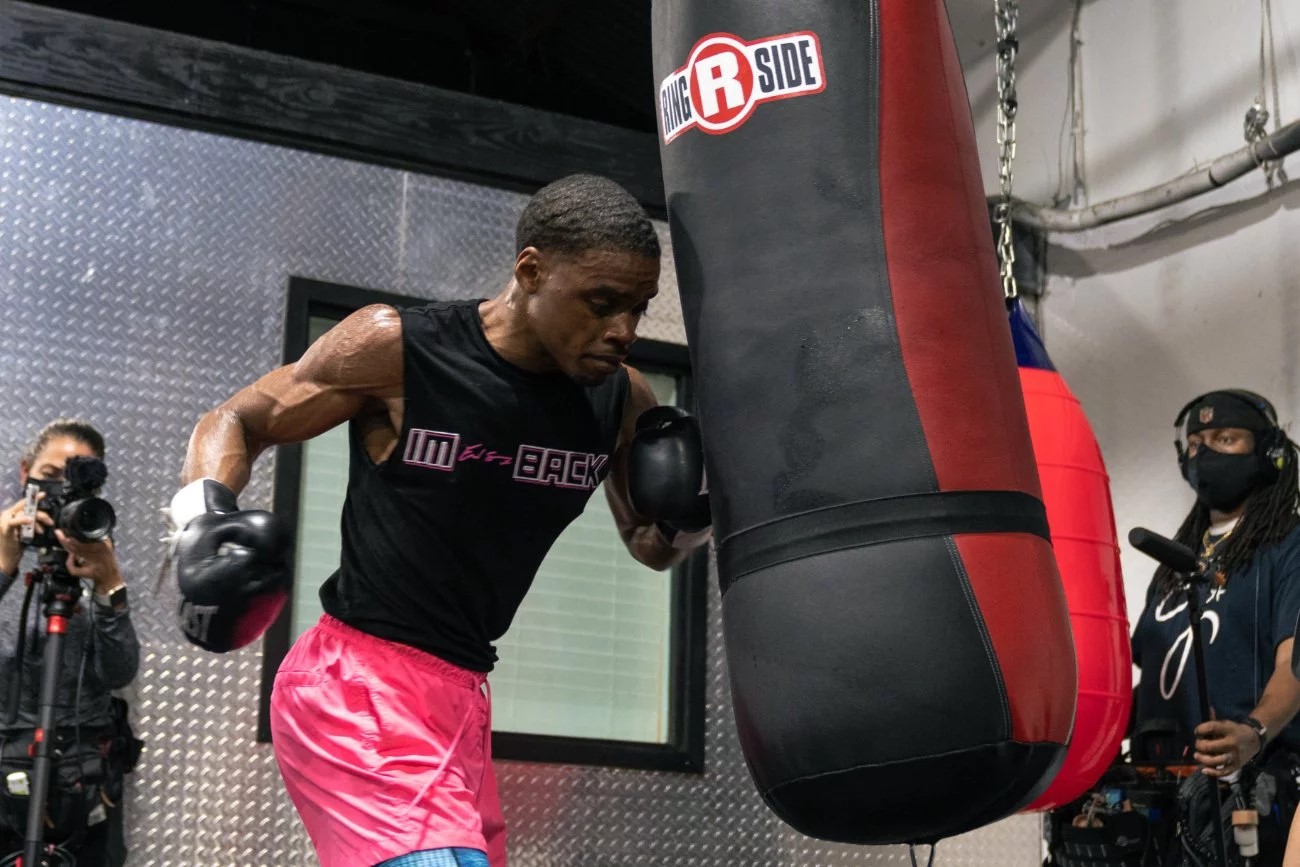 Spence was joined at the workout by his longtime trainer Derrick James. Here is what the workout participants had to say Thursday:

“I’m feeling great right now. I’m in shape and ready to go. We’ve been training hard, and we’re 100% percent focused. I’m ready to put on a great show for my hometown fans.

“I’m not concerned about ring rust. We have a game plan and I’m working with my coach every day on it. I’m going to stick to the plan and use it on December 5. I can’t wait.

“I picked Danny Garcia because he’s a tough opponent with a granite chin. He’s always in tough close fights. He’s going to bring the best out of me.

“If I took a tune-up fight, I wouldn’t be as focused or dedicated as I am right now. I know Danny’s dad is pushing him to take my belts in my hometown. So I’ staying focused to make sure that doesn’t happen.

“This is as good as I’ve ever felt. You can see I’m sweating today and I’m not dried out. There’s no struggle to make weight. I’m just feeling good.

“I don’t know if Danny is the hardest puncher I’ve faced. We’ll see when I get into the ring against him. But I know that I’m not Amir Khan or Adrian Granados or anyone else that he’s knocked out.

“I’m just going to feel him out. If I can press him early, I’m going to press and do what I do. We have a great game plan. Everyone has to tune in and watch what I’m going to do because this is guaranteed to be an exciting fight.

“There was a lot of uncertainty after my accident, but I knew that I wanted to keep training and make sure that I’m 100% ready to get into the ring. The doctors gave me the okay and said everything is fine, so I’m ready to go.

“It’s a blessing to have my son born during training camp. Seeing his face just pushes me to work harder. Along with my two daughters, I want to give all of them a great future. The only way I can do that is by training hard, staying focused, and getting this victory on December 5.

“I want to make an impactful statement. I guarantee there’s going to be highlighted everywhere from this one. It’s going to be a great performance.

“My message to the rest of the division is just, line ’em up. Everyone knows who to talk to. All the other top welterweights, anyone else in my way, can come and try to get it.”

“Errol has been working hard. The dedication and determination are there. He’s pushing himself as hard or harder than ever. You can tell there’s a competition within himself so that he can push himself to be the best he’s ever been.

“Danny is a very smart fighter. He’s one of the most decorated fighters in the sport and he’s got a great resume. He’s definitely a threat. So me and Errol both need to be on our ‘A’ game to be able to beat him.

“We don’t worry about what Angel Garcia is saying. On this level, you have to have that confidence that Angel has in Danny. We always believe we’re going to win. If it’s the Dallas vs. Philadelphia rivalry that inspires them, then that’s fine. We have our own motivations that inspire.

“The key to Errol’s power is his body. He’s punching with his whole body. He’s really focused on his technique and putting all 147 pounds of pressure into a shot. It could lead to a knockout at any point in the fight.”

ABOUT SPENCE VS. GARCIA

AT&T Stadium, which has hosted NFL fans during the 2020 Dallas Cowboys season, will be following guidelines from the CDC with protocols regarding COVID-19 safeguards and cleaning procedures. All fans attending the event will be required to wear a mask. Tickets will be distributed in seat blocks known as “pods” to maintain distance between groups who are not known to one another.