Chase Ends After Driver Gets Stuck in Stolen Ambulance, Tries to Escape on Foot

An hourslong chase with the driver of a stolen Dallas Fire-Rescue ambulance came to an end Monday afternoon when the ambulance appeared to get stuck and the driver tried to outrun police on foot.

Dallas police said the ambulance was taken from Fire Station No. 53 Monday morning and was spotted early in the afternoon in southeast Dallas County.

The man behind the wheel of the ambulance refused to stop and led police on a chase for nearly two hours that went through Dallas County north into Collin County and through the cities of Plano, McKinney and Princeton.

At times the driver intentionally drove into oncoming traffic, but no crashes have been reported in connection with the chase.

It was back in McKinney where the driver tried to again lose the police, sheriff's deputies, and state troopers in a residential neighborhood, often going off-road and across lawns trying to escape. 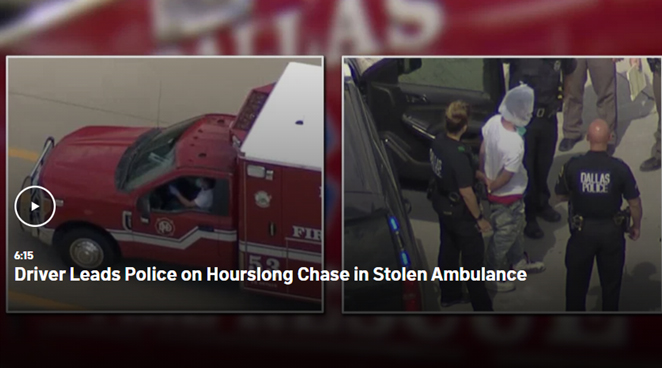 The ambulance apparently bottomed out a curb and the driver quickly bailed out and tried to outrun police on foot while also trying to hold up his falling pants.

Moments later the man was cornered in a fenced-in area and was taken into custody by several officers near Joyce Way and Tension Lane.

Officers with the Dallas Police Department, Dallas County Sheriff's Office and Texas State Troopers, and a number of other agencies, assisted in bringing the chase to a close.

An ambulance was taken from the same fire station in February 2020 and was driven to Louisiana.