The Texas Senate passed a Republican-led elections bill Tuesday evening after dozens of House Democrats fled the state to avoid voting on the measure.   In a party-line vote of 18-4, Senate Republicans approved the controversial bill that Democrats

and voters rights advocates say will suppress the votes of people of color and those with disabilities.

“This bill was just the last and latest of Trump Republicans attacks on democracy across Texas and our nation,” said Rep. Ron Reynolds, one of the Democrats who fled, at a news conference Wednesday. 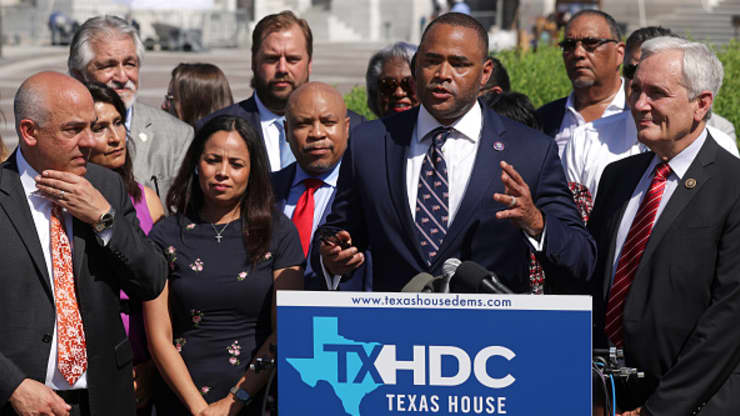 As many as 58 Texas Democrats decamped to Washington, D.C., on Monday and Tuesday, in a bid to deny Republicans the quorum required to conduct business in the chamber. However, the Senate on Tuesday still maintained a quorum with 22 of its 31 members present, allowing that chamber to vote and pass Senate Bill 1.

The legislation will languish unless the Texas Democrats return to the state before the 30-day special session called by GOP Gov. Greg Abbott ends. Abbott has threatened to arrest the state lawmakers once they return, according to The Associated Press.

Texas is among several states seeking to pass laws restricting voter access, which comes in the wake of former President Donald Trump’s repeated false claims that the 2020 election was stolen through widespread voter fraud.

Among the proposals included in the bill passed Tuesday are a ban on drive-through voting, limits on 24-hour voting options and new identification requirements for absentee voters. The bill would also prohibit local officials from sending out absentee voting applications to voters not eligible to vote by mail.

Democrats argued the bill proposed by GOP senators was an attack on voting rights meant to suppress voter turnout.

“Republicans have broken their promise to our seniors and the disabled by making it harder to vote, and also making it harder for Latino and African Americans,” Sen. Carol Alvarado, one of the Democrats who fled, said at the news conference Wednesday.

However, Republicans maintain the law would secure the elections process, dubbing it as the “Texas election integrity bill.”

“This bill is about making it both easy to vote and harder to cheat,” said Sen. Bryan Hughes, the author of the bill, the Texas Tribune reported Tuesday.

Hughes blamed the backlash about his bill on a “horrible, misleading, false national debate coming out of Washington,” according to the Tribune. 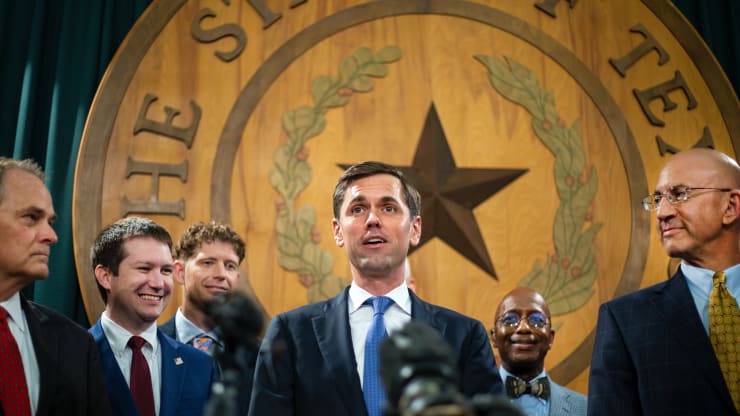 U.S. Rep. Mayes Middleton (R-TX) (C) of the Texas Freedom Caucus addresses the media in the Texas Capitol on July 13, 2021 in Austin, Texas.

The Texas Democrats said they fled to the nation’s capital to pressure Congress to pass voting rights legislation, such as the For The People Act, amid efforts by Republican-led state legislatures around the nation to change voting rules.

“We are here to implore Congress to pass sweeping voting rights legislation. We heard from over 400 constituents back in Texas who came to testify about the elections bill,” said Rep. Vikki Goodwin, another Democrat who left the state, at the news conference Wednesday. “Their stories fell on deaf ears among the Republicans. Please don’t let our pleas fall on deaf ears here in Congress.”

Several of the state lawmakers who fled have been in meetings with U.S. senators on Capitol Hill to discuss voting rights, the Texas House Democrats announced at the news conference.

Vice President Kamala Harris met with the Texas Democrats on Tuesday, and Sen. Joe Manchin, D-W.Va., is expected to meet with them as well. Manchin did not answer Tuesday when asked if he would support a carve-out in the Senate filibuster to pass voting rights legislation. He has previously opposed changes to the filibuster.

President Joe Biden on Tuesday also delivered a major speech in Philadelphia that condemned his predecessor’s “Big Lie” about a stolen election. The president called on Congress to pass the For The People Act and restore parts of the Voting Rights Act.