But those officials offered no specifics on how they planned to fight Obama's actions, and some gun rights advocates dismissed the president's proposals as mostly insignificant.

While Gov. Greg Abbott said that Obama “trampled” on the Bill of Rights, Lt. Gov. Dan Patrick called the ideas “political posturing and more propaganda.” But no immediate official action was announced by state leaders.

“Despite the President’s latest attempt to undermine our liberty,” Abbott said in a statement, “Texas will take every action to protect the Second Amendment rights of law-abiding citizens.”

Texas has a penchant for suing over Obama's executive orders. But it’s unclear whether there are any plans in the works.

Any lawsuit would probably be filed by Texas Attorney General Ken Paxton. Asked if the AG’s office was pursuing one, Paxton spokeswoman Cynthia Meyer said the office was “keeping a close eye on the issue.”

Paxton said in a statement that he stood ready “to fight back against any overreach that will deny or infringe on” the rights of gun owners.

In a post on his Facebook page, Texas House Speaker Joe Straus said the announcement showed “why we need to elect a Republican President who will not overstep his authority and who will protect the Second Amendment rights of law-abiding citizens.”

Obama tearfully announced his executive actions from the East Room of the White House on Tuesday.

He said he plans to increase the number of vendors who are required to conduct criminal background checks when they sell guns.

He said he will also hire more federal employees to handle those reviews and require dealers to inform federal authorities when a gun sold online is lost or stolen during transit.

The Obama administration has said his actions are clarifications and interpretations of current law.

No actions from Congress are needed. And the ideas are modest compared with new gun control laws that Obama has tried and failed to pass.

Edwin Walker, president of Texas Law Shield, which provides legal services to gun owners, agreed the orders were simply a clarification of how the law should be interpreted and enforced.

Obama can’t add new restrictions, so the orders appear to be aimed for a purely political effect, Walker said.

“It really won’t change much,” he said. “However, what he is hoping it will do is ignite a fire” that spurs more legislative action on guns.

The state would only have a reason to sue if the Obama administration were ordering the states to do something different than what they are currently doing.

“I don’t see anything in his orders that would do that,” Walker said.

But Texas leaders said Obama is going too far.

“The president may not personally like it, but we have the constitutional right to protect ourselves, our families and our businesses,” Patrick said. “If the president’s goal is to sincerely help protect Americans he should make it easier to legally purchase, train and use their weapons of choice for protection than trot out phony new regulations to stand in their way.”

“The president’s actions punish law-abiding citizens. Our country would be much safer if he were half as tough on criminals as he is on innocent Americans,” U.S. Rep. Lamar Smith, R-San Antonio, said in a statement Tuesday.

The order “is a blatant abuse of his executive authority,” said U.S. Rep. Pete Sessions, R-Dallas. “This is a misguided and unconstitutional power grab, and I will not stand for it.”

“This has been the most anti-gun administration in the history of our country,” Cruz told reporters before a campaign event in Cherokee, Iowa.

Discussing the anticipated order on Monday, Cruz extended his criticism to Democratic presidential frontrunner Hillary Clinton, calling it “entirely backwards” that Obama and the former secretary of state want to impose new gun restrictions as the country faces the threat of radical Islamic terrorism. 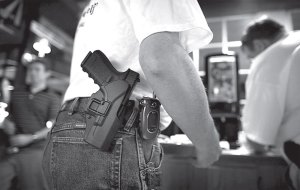