Ferris, TX - A combined Saturday special meeting of the Ferris City Council and the Ferris Independent School Board

was held to discuss a potential planned commercial development along the Interstate 45 corridor.

A proposed hotel and restaurant development plan to be be located at the present location of Trinity Industries was presented by Ferris City Manager Carl Sherman.

“This is a new day in the city of Ferris. We have an opportunity to have a Hilton Hotel along with a restaurant, either an IHOP or Waffle House come to Ferris.

"The hotel will be an 80-unit hotel with the Hilton name,“ Sherman said.

“This proposal came about because the city of Ferris city council is very bullish about making this thing happen.”

In order for this to happen, there would need to be a land swap.

“We are looking at options for the north end that possibly could include a recreational type complex,” Sherman said.

In the process of the land swap, the hotel land would become property of the city. As it will be city property, it is not taxable. In lieu of paying taxes, the hotel and restaurant businesses will pay a lease amount to the city.

The 6.5 acres presently located at 401 North Interstate 45 and occupied by Trinity Industries would be transferred to the city.

Trinity would be given a lot and would move to a four acre lot, where the Ferris ISD bus barn is currently located.

To replace the bus barn facility, the Wallaces have agreed to donate a nine-acre lot they have to the district to relocate the bus barn.

“For this to happen, the swap is necessary,” Sherman said.

“This land swap will be a boost to the city of Ferris economy and improve the quality of life for Ferris residents.”

Currently, there are no hotels in Ferris or the immediate surrounding area.

Developer, American Hotels own hotels in DeSoto and in Garland.

“I’ve known Perry Molubhoy, the owner of American Hotels, for a number of years. He stands by his operations and enters into a market with a commitment for the long term. We have had a very good relationship in Desoto,” Sherman said.

Griffith asked what help the district could expect from the city. City Mayor Michael Driggars said the city would work with the district with the inspection and various fees for the construction and relocation.

Griffith and Rodriguez both estimated the bus barn relocation to be

“There will have to be quite a bit of work on the lot so that the drainage will not affect neighboring properties,” Rodriguez said

For the project to move forward, both the city and the district will have to come to agreement on the

land ownership, tax abatements and the moving of Trinity. Both the council and the district will have to pass necessary actions. There will be many more meetings on this and other future developments, Sherman said.

“If we change the landscape of 1-45, we will attract new business to

“Thank you very much,” Griffith responded. “I can only speak for myself, not the board as a whole, but I feel we are all on board. It looks like the district is taking a hit, but with the city’s help along the way, we want to be a part of progress.” 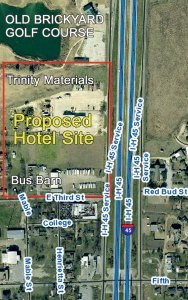