a debilitating and progressive disease that at one point took away his ability to play the guitar and even walk after he was diagnosed in 2006.

Now, he’s taking his music career to a new level by staring in Drowning Pool’s upcoming music video for the band’s latest song, “By the Blood.” Drowning Pool, a Dallas-based hard rock and metal band, has had the last three albums debut in the Top 5 on Billboard’s Hard Rock chart, and has hit platinum levels in its nearly 20 years, according to the band’s website. The album for which the song is on is expected to drop Feb. 5. Chris wrapped up shooting for the video Jan. 10.

But Cox, a Ferris resident, isn’t using the moment as a platform to raise more awareness, he said, adding the band members didn’t even know he had MS until about half way through shooting the video.

In fact, the entire casting happened by coincidence. Annie Cox, his wife, works on costuming and wardrobes for movies and commercials, and the band was looking for someone who could portray a certain look. With his arms sleeved by tattoos, a long beard and even longer blond hair, he was perfect, Annie said, adding all she had to do was send them a picture.

“I was reading some stuff on the music video, and it’s about this guy that’s been held down all the time, and whatever he’s been through, he’s always come back fighting,” Chris said. “It had nothing to do with MS. I think it was more reflective of what the band went through in the industry. They continue to go on. It’s kind of funny because it kind of had a double meaning. They didn’t know I had MS at the time I got the job.”

Chris knows all about what it means to come back fighting, and continue to go on. Two months after he was diagnosed with MS, an unpredictable and disabling disease in the central nervous system that disrupts the flow of information between the brain and body, the disease put him in a wheel chair for almost a year, leaving him unable to perform music or even walk, according to a previous Daily Light article published in 2014. He had to not only teach himself how to walk again, but how to play the guitar without the ability to fill the strings.

MS symptoms include blurred vision, thinking problems, clumsiness and lack of coordination, loss of balance, numbness, tingling and weakness in arms or legs. Those with MS may go months or years without any symptoms, and then the disease will flare up and get progressively worse each time. Those with MS may also feel a “pins and needles” sensation, bladder and bowel issues, muscle spasms, tearing pains, dizziness and often fatigue. One of Chris’ most common symptoms is band pain, where it feels like someone has a belt around his ribs and is squeezing it, he said. That, along with numbness in his feet and hands, are the most constant symptoms, he said.

“My part in the video is this guy who is being held captive, and tortured and they’re leading me out to a firing squad to have me killed, but things don’t go as planned,” he said, adding he wasn’t sure how much he could give away. “It was fun, and they do all kinds of creepy stuff in the video. I grew up with the original singer, Dave Williams, before he passed away. It was cool, and I was really excited.”

On the last day of filming, Chris’ hands were zip-tied together and he was asked to walk down stairs with a guard behind him. In only a T-shirt, and barefoot, with chilly temperatures, the walk was no easy feat, though he tried to remain strong and willing to take on anything he could for the role. He leaned on the wall for support, and ultimately Annie spoke up to let them know about his illness.

“That’s when they were like, ‘Let’s have the guard hold onto his shoulder, just in case,’” Chris chuckled. “They asked if I could do it, and I wasn’t going to say no to anything, and I thought if I fall down, maybe it’ll be a good shot for the video.”

That was the most challenging part of the process, he said, adding the scene took multiple shots and the stairs were steep and housed in a historic industrial building, turned party venue in Dallas.

“He’s always been a performer,” Annie laughed. “When they said, ‘Do you know anyone who fits this role?’ It was very easy to look over at the other end of the couch and go, ‘Yeah, I’ve got this covered.’”

Chris, who was part of the Deep Ellum music scene in 1993, has been a musician as long as he can remember, he said in the previous article. He traveled all across the U.S., and even made a music video seen worldwide in Blockbuster movie rental locations. But as his MS began to take over, he couldn’t keep up with the demand, he said.

So, seeing her husband take another step toward continuing his dream, Annie said it was great to see Chris get back into doing something public. With MS, Chris now mostly works on music at home and remains an advocate for those struggling with the disease, but he never knows day to day how he’s going to feel, she said.

The Daily Light reached out to Drowning Pool, but did not receive comment by press time about what it was like for the band and Chris to work together. As for what’s next for Chris, he doesn’t know for sure. He’s started working on his second CD to raise awareness for MS, and he’s constantly using social media to make connections and advocate for those who are dealing with the disease for the very first time. There’s even talk of him being part of a zombie film in the future, or starting a fundraiser to help continue his work, he said.

“It’s been an incredible journey, with some really great and some really terrible moments, you know? But he gets up every day and fights for what he wants to do,” Annie said. “He’s trying to find some enjoyment in life, even though he’s been kind of dealt a crappy hand with some of this stuff. I feel like he’s been a role model and inspiration for other people who have the same kinds of problems.” 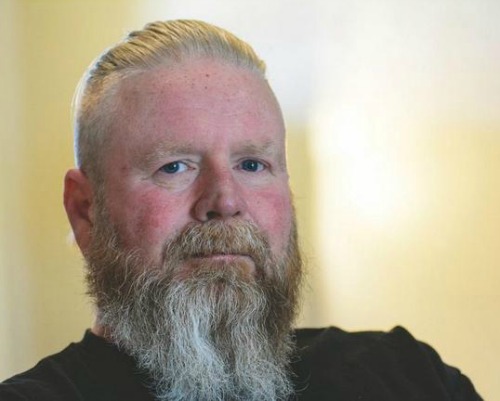