Selvig, a 30-year-old Marine Corps veteran from Fort Worth, did two tours of duty in Iraq and came home suffering from post-traumatic stress disorder.

He signed on with Team Rubicon, a nonprofit formed by veterans and first responders to assist in disaster relief domestically and around the world.

“Until I deployed to help with Hurricane Sandy, I had basically spent about a year-long bender in a bar,” Selvig said. “Something I found during Sandy was, with each way I could help, I was able to piece myself back together.”

Selvig and about 40 others are part of Team Rubicon’s tornado relief effort in Glenn Heights. City leaders say they have been instrumental. They form at 7 a.m. each day at Home Depot in Lancaster before fanning out to clean up and repair damaged neighborhoods. Members from all over the country will be in town over the next several weeks cleaning up hard-hit spots.

McCord, a civilian from Camden, Ark., with no military experience, joined the team in summer 2012 after two friends — brothers Jeremy and Ben Wise — were killed about two years apart in Afghanistan.

“I was just looking for something to keep their memories alive,” said McCord, who is stationed at Glenn Heights City Hall to help organize volunteers. “So I just started Googling, and Team Rubicon came up.”

The tornado that struck Dec. 26 touched down in the southern part of Glenn Heights, destroying several homes and leaving others heavily damaged. It moved north, sparing some neighborhoods and devastating others before it vanished after just crossing over into DeSoto.

On Trishia Lane near the border with DeSoto, eight homes were destroyed, including Mohammad Masri’s.

Team Rubicon members demolished the remains of his home and saved some valuables, Masri said.

“They are not just people,” Masri said. “They are angels.”

Masri and his wife were in Houston on a fishing trip the weekend the tornado struck. As they drove back toward Glenn Heights, they listened to updates on the radio. They got to Ovilla around 10:30 p.m. and saw that power lines were down.

Police had blocked traffic from moving any farther, so the Masris spent the night at their daughter’s home in Red Oak. They didn’t see their home until early the next morning.

Selvig and several Team Rubicon volunteers recently worked in one of the city’s northern neighborhoods on a brisk morning, cleaning up homes on Tejas Drive.

Of four homes that sit along a cul-de-sac, two have been labeled destroyed. A third has been declared to have major damage according to a color-coded map put together by the Texas A&M University Forest Service. The fourth only lost a few shingles.

“That’s the nature of the tornado,” said Joe “Pops” Foley, a Team Rubicon volunteer from Galveston County who served in Japan as a member of the Air Force during the Vietnam era.

Team Rubicon formed in 2010 when three Marine veterans wanted to aid in disaster relief after an earthquake devastated Haiti. They based themselves in the Dominican Republic, and when they crossed into Haiti, they likened it to their own personal Rubicon — the river Julius Caesar and his army crossed into Italy, when civil war became inevitable. The point of no return.

“That original three ended up being seven or eight total. They kept meeting people in airports along the way. ‘Are you going to Haiti?’ ‘Yes!’” McCord said.

The organization has since grown to some 32,000 members. Many have military connections, but anyone can join.

According to its records, Team Rubicon assisted in 38 operations in the U.S. and three internationally in 2015, working a total of 75,000 hours in the field.

“They have been a tremendous resource to the city, and recovery would not be possible without them,” she said.

“We have had people come in from all walks of life to help, and if everyone acted on their own it would be chaotic. There’s still plenty of work to do, but they have effectively processed 1,500 volunteers. I don’t think we would be halfway where we are without them.”

As soon as Glenn Heights officials gave their OK, Team Rubicon volunteers were there, including 10-year Glenn Heights police officer Lucas Benson, who was off duty at the time but arrived within 10 minutes.

“As unfortunate as it was, we were lucky that it happened the day after Christmas when a lot of people were still gone,” said Benson, who also serves as the city’s liaison to Team Rubicon.

Tejas Drive is bisected by Glenn Lane. One side of the street appears normal, with vehicles parked in driveways and homes showing little, if any, damage from the storm. There are no signs of residents on the other side, which is quiet except for the sounds of hammering and tractors hauling off bricks and other debris.

At one home, a sign advertising the Drop-Inn Motel covers the length of its destroyed roof.

Team Rubicon has to have permission from homeowners before it can help clean up, said Benson, an Army veteran who did three combat tours in Iraq.

“We don’t know where a lot of residents are, or we don’t have good contact information, so we can’t do anything,” he said.

“As bad as it is, it’s nice to be able to give homeowners a fresh start on rebuilding,” he said.

The team has its share of retired members, but many still work full-time jobs.

“A lot of us have jobs and are here on their vacations,” said Foley, 68, who sells medical equipment and says he has no plans to retire.

“These people’s worlds have been turned upside down,” she said. “Even if it’s just for five minutes, it helps to take a little bit of the chaos away.” 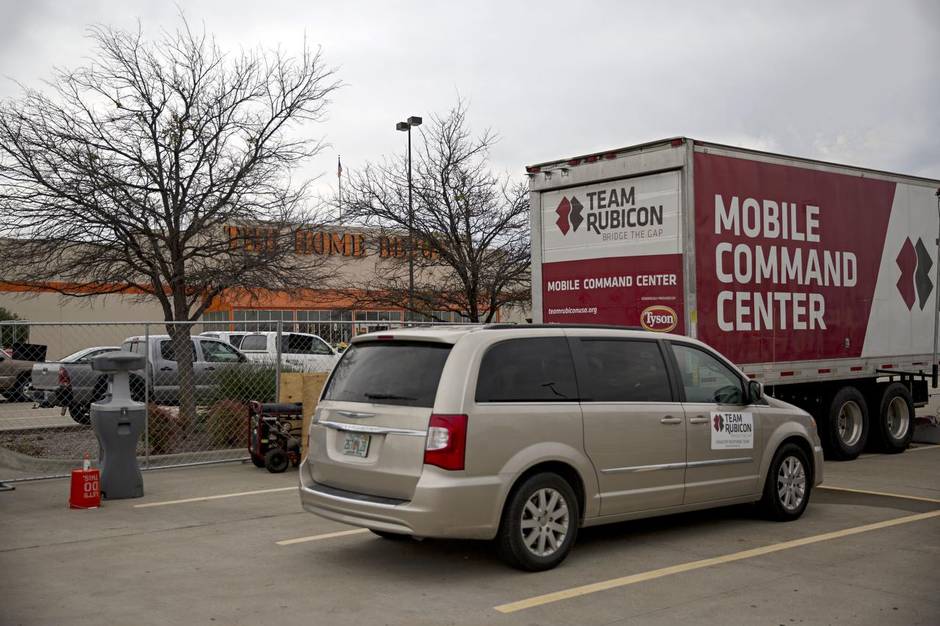 The Team Rubicon Mobile Command Center has set up shot at Home Depot in Lancaster. Every morning, team members meet here before fanning out to help with tornado relief efforts in Glenn Heights.