Ovilla, TX - Ellis County resident Judy Littlefield opens up about her son Chad Littlefield in her new book, who everyone knows as the friend of the ‘American Sniper’ and who died tragically alongside him.

In 2013, Chris Kyle, better known as the ‘American Sniper,’ was a Navy Seal veteran who was murdered at a shooting range, but what many don’t know is that Chad died with him, according to Littlefield.

Littlefield has written a book to commemorate her son’s death called, “The Other Man Down.” She wrote the book for those interested in knowing about Chad’s life. 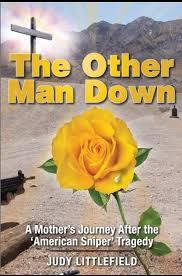 “Because Chris was a hero, Chad was just kind of left behind. I’ve had a lot of inquiries about who Chad was, wanting to know his story ... so I decided to write the book ‘The Other Man Down,” Littlefield shared. “There were two men killed that day, and so many people don’t know that. Anyway, I wrote the book ... to try to tell my experiences or try to tell the truth of the aftermath of the ‘American Sniper’ because we waited two years before we went to trial.”

Chad and Kyle became friends after Kyle finished his tours in Iraq.

“He (Kyle) did four tours in Iraq and came back. My son Chad befriended him ... He was not military. Chris was trying to transition back into civilian life, and they met on the soccer fields. Both of their little girls played soccer together, so the friendship was formed from there. Then he was a good listener, and he would listen to Chris. They would work out at 5 o’clock and help Chris through talk therapy,” said Littlefield.

According to the Star-Telegram, Chad and Kyle were murdered at a shooting range near Chalk Mountain, Texas. Kyle, who was a former Navy Seal, and his friend Littlefield were walking down the range to set up targets when Eddie Ray Routh opened fire and hit both of them.

Littlefield said they were going to help a Marine veteran who was having some problems. “Chris decided that they would take him out to the gun range that day and invited Chad along with them. This veteran turned on them and murdered them both at the gun range,” she said.

From this book, Littlefield hopes that people will get hope and clarity from her perspective on the trial and occurrences.

“The book is about just my journey through and through the trial. Chris and Chad lived in Midlothian, but we have friends all down Waxahachie. Waxahachie put up signs in the trial, and it was going down in Stephenville,” Littlefield said.

“I trust that they’ll get hope and the endurance that you’re not alone in crisis, and that God will go with you and bring you through. Though it’s not a faith-based book, it is backed up by some scripture. There’s so many stories in there of when we were down, and you know you just wanted to give up, and God would send someone to the door and pray with us. He was always at our side, even though sometimes we thought he was silent,” Littlefield said.