At Glenn Heights school, volunteers salvage what they can

Glenn Heights, TX - In one room on one side of a hallway at Donald T. Shields Elementary, water pooled on the floor and dripped from the ceiling.

But other than that, the empty room appeared normal.

On the opposite side of the hallway, however, a teachers’ workroom lay in shambles, destroyed by a tornado that rumbled through Saturday night.

The mangled space was a school-designated safe room.

“If there had been kids here, those that had gathered on that side would have been fine,” gifted and talented specialist Cindy Belote said Monday. “But those who would have been on this side …”

The school appeared largely intact, looking at its front from the outside. But inside was a tangled mess of wires, broken glass, drenched carpets and steel girders jutting menacingly from a ceiling that opens up to the sky.

On Monday morning, more than 500 volunteers from across Ellis and southern Dallas counties gathered at the ruined structure and undertook a mammoth project to remove what is salvageable and move it about 31/2 miles away to a vacant junior high. The former Red Oak Junior High will serve as a temporary home to more than 500 Shields students when classes resume Jan. 5 from winter break.

“Just about every teacher’s classroom has been picked up and moved out,” said Red Oak ISD school board member John Anderson, who oversaw volunteer efforts at Shields. “People didn’t just show up. They showed up and worked.”

Just east of Interstate 35E, the hallways at the vacant junior high are choked with boxes that contain teaching supplies. The names of Shields teachers have been taped to the windows just outside their new classrooms: Sutherland 109; McGregor 104; Brynsvold 307; Belote 313.

The old building, which has been empty for several years, needs some plumbing and wiring repairs, said Brent Stanford, Red Oak ISD’s director of Support Services. All of the restrooms are being redone, and volunteers and school employees are painting as many classrooms as they can get to.

“The plan was to make this building a second middle school, so we’re lucky that we had an empty building to work with,” Stanford said.

Despite the scale of damage, school district officials are hopeful that Shields will reopen one day.

“We’re probably looking at seven or eight months to get it back online,” he said.

Most of the neighborhood around Shields was spared, although a nearby church was destroyed. Little Hawks, a day care center for the children of school district employees, suffered minor damage, but Stanford said he hopes that facility can open once winter break ends.

Shields is the only campus in the district that was damaged, Stanford said.

“There was one couple from Midlothian, and their last name was Love,” Belote said, smiling at the thought of that. “We have had so much help, and we are really lucky.”

Some students even boosted the effort by giving their Christmas money back to the school, Belote said.

“People say that people just don’t care anymore, but look around at all these people here,” he said. “We are really blessed.” 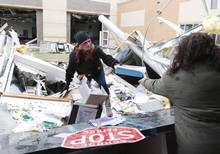