Glenn Heights, TX - An engineer who inspected damage across North Texas after Saturday’s deadly tornadoes says he saw “rampant irresponsibleness” in the way many homes and buildings were constructed.

“We saw a tremendous number of improper attachment of the walls to the foundations, which just made walls fall either in or out,” said Timothy Marshall, a forensic engineer and meteorologist who volunteered as part of a damage survey team created by the Fort Worth office of the National Weather Service.

The construction Marshall flagged as faulty included that of a Glenn Heights elementary school that suffered extensive damage.

“We saw problems at [Donald T.] Shields Elementary school that were horrific in my view as an engineer,” Marshall said. “Walls not attached properly, and they’re just falling down like a house of cards.”

The school’s main structure survived, and officials say it will be repaired. But some of its brick exterior walls fell away, exposing the school’s interior to the storm. Inside was a tangled mess of wires, broken glass, drenched carpets and steel girders jutting menacingly from a ceiling.

Had students been inside when the storm hit, they clearly could have been injured.

Marshall said he toured the damaged school with school officials this week, and he was shocked by the lack of proper attachments linking the walls to the rest of the structure.

“You don’t need to be an engineer to understand this stuff,” he said. “The school officials, they saw this, and they knew immediately that this was a real problem.”

A spokeswoman for Red Oak ISD, Adi Bryant, said the school was built in 2008. In a press release issued Friday, Red Oak ISD named Ratliff Constructors as the construction company. Multiple calls to officials at Ratcliff have not been returned.

“Right now we’re worried about getting our kids ready for next Tuesday,” Bryant said. Shield’s 500 students are to resume classes in the former Red Oak Junior High when they return from winter break.

That’s where Marshall comes in. He has worked often with the Weather Service and volunteered to help this week.

“He’s pretty much the one that wrote the book and teaches how damage surveys should be done,” said Mark Fox, a National Weather Service meteorologist who led the team. “He’s one of the best.”

Marshall posted a photo of the damaged school on his Facebook page this week, commenting that the walls “were in essence free-standing.” The post drew dozens of comments and attracted notice from experts in his field.

He estimates the wind that buffeted the school was only about 85 to 90 mph. Typical construction codes require methods that should withstand that sort of wind.

Once winds approach 150 or 200 mph, almost no structure will withstand it. If winds at the school had been that strong, Marshall said, the interior structure that supports its roof probably would not have survived.

“I let the Weather Service know that it didn’t take much wind to knock down these walls,” Marshall said.

He also posted on Facebook photos of other damage across the area. In addition to Glenn Heights, he visited Garland, Midlothian and Sunnyvale and found faults in construction in each area.

Constructing stronger homes and buildings makes financial sense and is good public policy, says Kevin Simmons, a professor of economics at Austin College in Sherman, who studies the issue.

While it’s not feasible to construct homes to withstand 200 mph winds, he says, such wind speeds are rare. An EF3 tornado, like the one that hit Ovilla and Glenn Heights, has wind speeds as high as 155 mph. But it will also have lower wind speeds in much of its path. Most affected homes experience winds that can be designed for in a cost-effective way, he says.

Florida adopted an enhanced building code after Hurricane Andrew revealed inadequate construction. Moore, Okla., adopted a similar code after the 2013 tornado that caused $2 billion in damage and left seven students in an elementary school among its dead.

Many of the improvements are as simple as attaching walls to structures securely, Simmons said.

“What really drives the cost of damage up is when those walls fall down,” Simmons said. “If you can keep the exterior of the structure essentially intact, you’re going to really reduce your cost.” 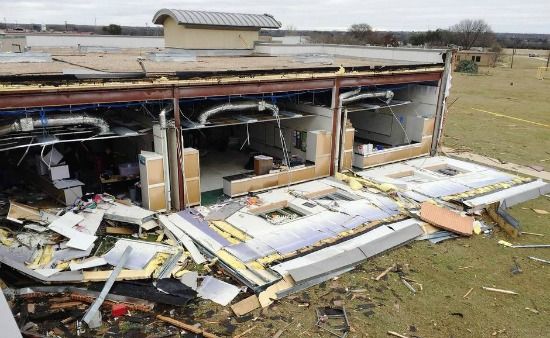