During a movie on the lawn event at a city park, the then 6-year-old had the sudden notion to impact the unfamiliar community.

It was a chilly, damp evening in 2016 when Kennedi empathized with people who do not have permanent shelters.

“It’s just the fact that they are people like us and they need the same type of care as we do,” Kennedi explained.

The ambitious Donald T. Shields student served her first 100 meals to the homeless that Thanksgiving and collaborated with her Girl Scout troop to donate blankets, socks and meals that Christmas.

“It kind of spiraled from there,” Kennedi’s mother, Machanta, said.

The family began to regularly venture to Dallas to provide home-cooked meals and ultimately established a 501c3 status in March with the nonprofit, Kennedi Kares. 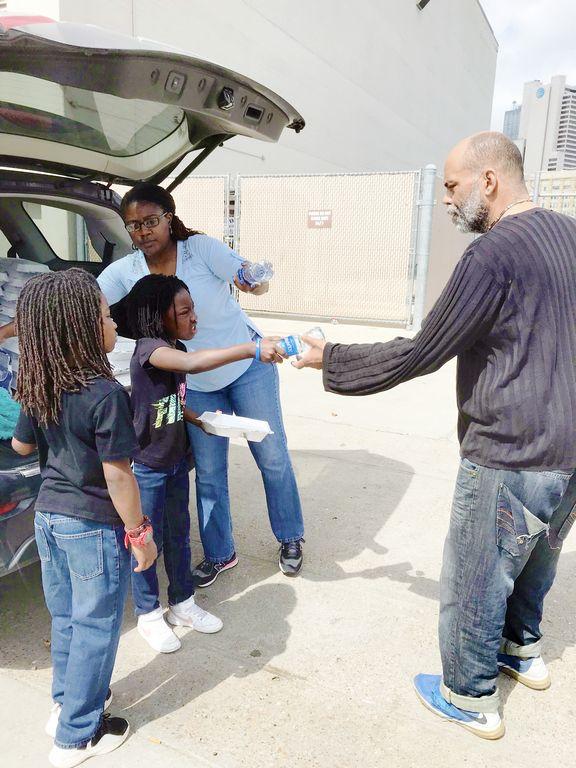 The first weekend of each month, Kennedi will create a menu for her father — who attended culinary school — to cook that includes a balanced meal, beverage and of course, a dessert. That Saturday, the lunch is prepped and is freshly prepared Sunday morning before being transported to Dallas.

With 146 meals in the trunk, the family travels to Ervay Street, which is in proximity to about five shelters. It usually takes the family of four about 25 minutes to distribute the food.

“When we get to this big parking lot, they all come running to the car, and we just pass out plates,” Kennedi explained.

When Kennedi hands out the meals, it makes her feel “Happy and that it makes me want to do more of it.”

The reactions from the homeless will always stick with Kennedi, who notes her interactions are continuously positive. People routinely tell her, “Have a blessed day.”

On the car rides home, the family discusses sensitive topics that revolve around the homeless community and one question Kennedi inquired about is mental health.

Another thing Kennedi learned about herself through this initiative is that she is “not an ordinary child. I am a child that loves people and to feed the homeless.”

Kennedi attributed her selfless character to her mother, who is a social worker by trade and works at the Fort Worth Veteran Affairs in the medical foster care unit.

She then shared a time where her mother inspired her.

“I saw my mom help this man one day. He was laying on the sidewalk, and his feet were in the street,” Kennedie explained. “My mom was trying to help him get up so he wouldn’t get hit by a car.”

The family has made an impact in the Dallas area for the past three years and desires to localize the help in Ellis County.

In January, the Homeless Coalition of Ellis County conducted a Point-in-Time count that surveys individuals that appear to be homeless. Data is sent to the Housing and Urban Development —also known as HUD — which is an executive branch of the U.S. Federal Government.

In a 24-hour setting, 47 people were documented as homeless in Ellis County. Of that, 44 people were unsheltered and three sheltered.

Data collected in 2018 showed 14 individuals in the homeless population. The significantly smaller number is attributed to the lack of resources and volunteers to conduct the PIT count.

In a previous Daily Light report, Homeless Coalition of Ellis County president John Stout stated, “It appears many of the unsheltered were transient and just moving through the county to reach their final destination. This is good news for Ellis County. It shows that we are taking care of our indigent population very well.”

Machanta is getting acquainted with the local homeless coalition and will attend the June meeting at 6:30 p.m. Tuesday at the Waxahachie Housing Authority, located at 208 N. Patrick.

Kennedi is passionate about providing opportunities for homeless people. As the nonprofit develops, Kennedi hopes to advance services to include basic needs, social and emotional help, education and recreational opportunities.

“She wants them to have every opportunity she has,” Machanta said.