Glenn Heights, TX - ‘Tis the season for package thieves, but Glenn Heights has a plan to thwart them. Operation Front Porch is a program the Glenn Heights Police Department created to reduce the number of stolen/missing packages during the busy holiday season.

Glenn Heights, TX – The Glenn Heights Police Department is allowing residents to have packages shipped to the police department between now and December 24 to avoid package theft. The program, entitled “Operation Front Porch”, is now in its second year in Glenn Heights. 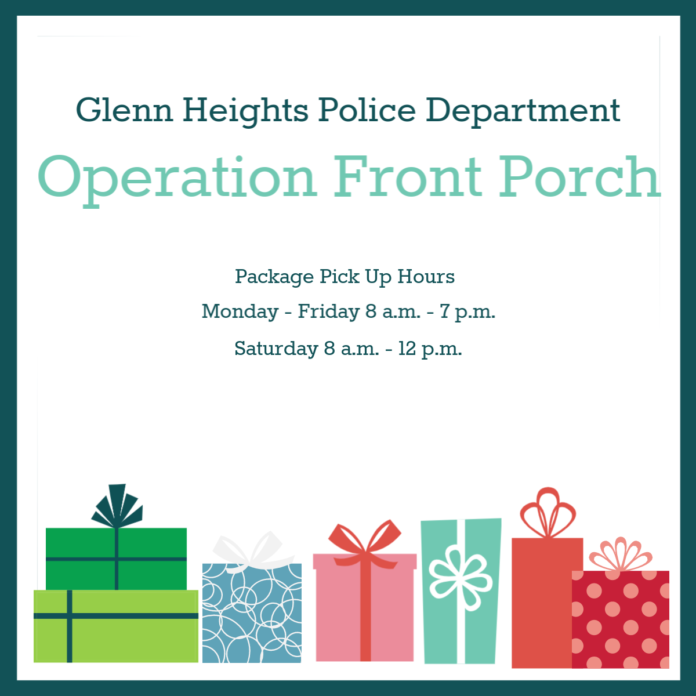 To have packages shipped to the police department, residents should enter the following shipment information:

To pick up packages, residents must bring a government-issued identification card and order/shipment proof of receipt. Parents picking up packages addressed to their children must bring proof of guardianship and/or the child’s identification. Residents can pick up their packages during the following times:

Package pick-up will not be available on Sundays. There is no charge for the service, but the Glenn Heights Police Department requests that packages shipped to the station weigh less than 50 pounds.

On September 1, a new law went into effect allowing convicted mail thieves to be sentenced to between 180 days in jail and 10 years in prison. The sentence depends on how many people they have targeted. They will also face fines ranging from $4,000 to $10,000. Punishment increases for ten or more packages stolen. Identity theft or targeting vulnerable or elderly can result in additional/upgraded charges.