— were in Victoria Thursday for an invitation only meet-and-greet attended by city and law enforcement officials.

Aside from the event, the finalists will participate in a formal panel interview and other private meetings.

The search for a new police chief began earlier this year after former Police Chief J.J. Craig announced he was resigning from his position with the city of Victoria to take a job as the police chief in Richmond.

A sole finalist for the position could be announced at the end of the month. 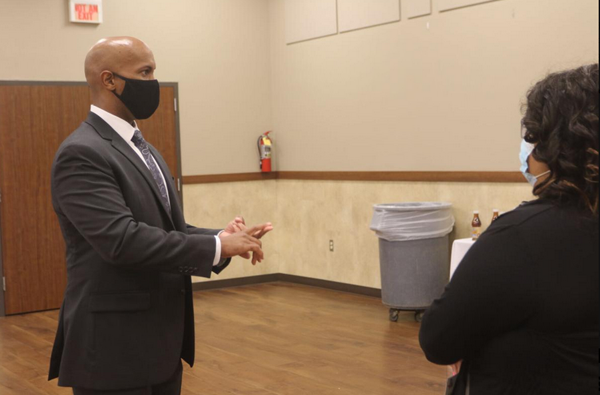 Vernell Dooley Jr., chief of police for the city of Glenn Heights

Though the three candidates each have different backgrounds, experiences and reasons why they believe they are the right choice to serve as Victoria’s next top cop, each said that building relationships with Victoria residents as well as nonprofits and other community organizations would be among their first concerns.

“That starts really day one,” Dooley, 40, said. “We have a community to take care of, and we can’t do it by ourselves. We have to build those relationships to take care of our community.”

With more than 15 years of law enforcement experience under his belt, Dooley said he’s the best candidate for the job because he is “relentlessly committed to the service of others.” He began his career as a police officer in Denton in 2005 and has served as the police chief in Glenn Heights since 2017.

If chosen for the position, Dooley said he would hope to improve police-community engagement with Hispanic and Spanish-speaking residents, an area he said is currently a missed opportunity.

He said he’s noticed that videos from the police department are only produced in English, which doesn’t match Victoria’s demographics.

“Why not produce videos in Spanish, so we can connect more deeply with all of our residents?” he said.

Like Dooley, Arredondo, 46, who has more than 22 years of law enforcement experience, said immersing himself in the community would be a top concern. Noting the recent nationwide calls for police reform, Arredondo said he would work to build a foundation of trust with the community through long-lasting relationships.

“We’ve got to get back to being the good guys again, and that’s going to require us building that foundation, immersing ourselves in the community and adding more than just calling and answering,” he said.

Austin, 54, who has more than 25 years of law enforcement experience, said that alongside building relationships, he would prioritize “moving the department to the next level.”

Victoria’s police department already has “an extremely good reputation in the community,” Austin said, adding that his wide-array of professional experiences and education would make him the best candidate for the role.

Growing the department’s partnerships with different nonprofits and organizations, including those that offer mental health services, is among Austin’s main goals.

“We have to remind people that law enforcement is still a very noble profession, and we need people that are willing to step out and serve in this very important role,” he said.