Balch Springs, TX - Balch Springs police found 22 pounds of methamphetamine inside a duffel bag in the trunk of a car after pulling over a suspected drug dealer, records show.

Officers pulled over Ramiro Sanchez, 39, for speeding Monday afternoon after the Drug Enforcement Agency told Balch Springs police they believed Sanchez was running a methamphetamine operation. DEA agents had been watching a home in the 10900 block of Spring Tree Drive near Lake June Road. The DEA said two cars, a Mazda M3 and a Cadillac CT, were under surveillance at the residence, according to an arrest warrant affidavit.

A patrol officer saw Sanchez driving the Cadillac on Elam Road, and other officers were called. Sanchez was later pulled over for speeding on Belt Line Road, the warrant says. He was arrested on a charge of violating a driver’s license restriction for not wearing his eyeglasses. A sergeant searched his car and found the duffel bag.

The duffel bag contained about 22 pounds of meth separated into 10 bundles. Officers found another 22 pounds of meth in 10 bundles stored at the home on Spring Tree Drive, where police and DEA agents believe Sanchez and 30-year-old Michael Manriquez were operating a drug trafficking business.

Agents and officers found a drug ledger, $3,000 in cash and several flip phones in the house.

Sanchez and Manriquez have both been charged with manufacturing and delivering methamphetamine. They remain in the Balch Springs jail in lieu of bail of $500,000 apiece. 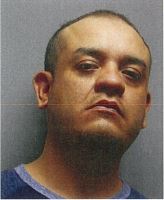