Balch Springs officials said the sergeant who used the stun gun April 28, 2016, had been reprimanded but was not charged. 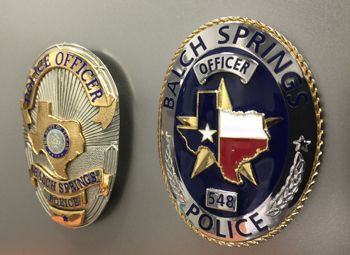 The video was mailed to KDFW-TV (Channel 4) and published on Tuesday, but it is not clear how the sender obtained it.

The Balch Springs department said it is worried the incident will create more tension between the public and police, who have faced increased scrutiny since late last month when Officer Roy Oliver fired his rifle into a vehicle of teenagers, killing 15-year-old Jordan Edwards.

Oliver, who is white, was fired days later and has been charged with murder in the black teen's death.

"With recent events, we understand we are under the microscope from the public eye, and that is why we will continue to serve our community as we have done in the past," the department said Tuesday night in a prepared statement.

The department's chief initially said the car Edwards was in was backing down the street toward officers when Oliver opened fire, but changed his account after reviewing body-camera footage.

In the 2016 video, three officers, who all appear to be white, are seen responding to reports of a man waving a gun in the neighborhood. Marco Stephenson, a black man, is seen kneeling on the sidewalk with his hands on his head as an officer gets out of a squad car, KDFW reported.

One officer kicks  away what was later determined to be a BB gun as another handcuffs Stephenson.

"Better watch it, Marco," one says.

Stephenson says something about spitting a toothpick in the grass. One officer cuts off the strap of Stephenson's backpack, as the sergeant unholsters his taser and presses it to Stephenson's stomach.

"You going to straighten up? Because I ain't playing with you today," an officer says.

Balch Springs Police Chief Jonathan Haber told KDFW that the actions of the sergeant, a supervisor, were questioned by his own officers who brought it to the attention of the administration.

The department said in its statement that the Texas Rangers and other agencies had reviewed the case. After internal and external reviews, the sergeant was restricted from contact with the public until he completed classes on conflict resolution, anti-bias and how to respond to mental health calls, KDFW reported.

Haber told KDFW that Stephenson, 39, is well-known to authorities.

In 2008, he kicked a Balch Springs police officer and was convicted of assault on a public servant. He also previously pleaded guilty to resisting arrest, criminal mischief and criminal trespass charges, Dallas County records show.

Haber told the station he is concerned about how the video might affect the public's perception of the department.

Eight out of 10 Balch Springs police officers are white — though 4 out of 5 five residents are not.

"We understand people are upset and angry from the video that occurred in 2016, and we have made changes and corrections to better serve our community," the department's statement said.

It does not elaborate about what those changes were.