But two police officers — including one who is now the police chief — decided no crime occurred. The victim was arrested for making a false report.

The police eventually dropped the false-report charge against Michael Cunningham, but only after they came to his family’s house  in the middle of the night and took him to jail.

A federal judge has questioned the officers’ judgment.  In a March  opinion, he wrote that a jury could conclude they were either "plainly incompetent" or violated the law when they  “made the decision to charge Cunningham with filing a false report.” His ruling came as he refused to dismiss the case before trial, as the officers had requested.

The judge said videos of what happened outside the store and Cunningham's interrogation “flatly contradict the version of events presented by the officers.”

The 2011 incident again raises questions about the interactions of white officers and black residents in Balch Springs. In April, the city’s Police Department came under national scrutiny after an officer shot 15-year-old Jordan Edwards. Jordan was shot and killed as the car he was riding in left a party. The officer was fired and charged with murder. The U.S. Department of Justice recently met with Dallas prosecutors about the case.

In the surveillance video from Dec. 3, 2011, Cunningham and his co-worker, Eddie Ortega, are seen arguing in the parking lot of 1 Stop Food Store. Ortega, now 44, kept calling Cunningham on his day off to help fix a car, Cunningham said. Part of their dispute takes place behind an SUV, mostly out of sight. The two briefly shove each other. Then, Cunningham walks away and stands by his truck.

Ortega walks up to Cunningham and twice holds the tire iron over his head. He threatens Cunningham, who holds his arms up to protect himself, but doesn’t hit Cunningham.

Officers responded to a  911 call from a man who said he saw a Hispanic man trying to hit a black man with a tire iron. Another Balch Springs officer initially arrested Ortega on a charge of aggravated assault with a deadly weapon. That officer was disciplined for how he handled the incident, personnel records show. The case against Ortega was dropped.

Haber is now police chief. He initially — and wrongly — told the public in April that Officer Roy Oliver fatally shot Jordan because the car he was riding in aggressively backed up toward officers. Body camera video showed the car was actually driving forward. Haber fired Oliver, who has been charged with murder.

Young is a patrol sergeant. In May, body camera video from 2016 surfaced that showed Young tased a man who was on his knees and had his hands on his head. The Texas Rangers investigated the incident but no charges were filed.

In each instance, the officers were white and the Balch Springs residents they shot, Tased or arrested were black. Jordan’s family and the man Young tased, Marco Stephenson, filed lawsuits against the department that are still pending.

The public may never have known what happened in any of the incidents if they hadn't been recorded, said Cunningham's attorney, Geoffrey Schorr.

“Thank God for videos,” he said.

“Why did all of this happen? Is it top-down or is it a rogue cop?” Schorr said. “We don’t want this to happen again. We don’t want any more people to be killed by the police or be wrongly tased or have their civil rights violated.”

Haber and Young declined to comment about the Cunningham case, but their attorney says they stand behind Cunningham’s arrest.

Four days after the incident, Haber and Young asked Cunningham to stop by the department. They had taken over the case and had questions. Cunningham showed up dressed for work, navy pants and blue shirt and keys to the city dangling from his belt.

Haber and Young’s interrogation of Cunningham lasted nearly 90 minutes and was captured on video.

The officers remind Cunningham to tell the truth.

Haber and Young ask him to show how Ortega threatened him. Cunningham says Ortega “swung” the tool at him and demonstrates. He gestures with his right arm at his side and swings it from front to back. 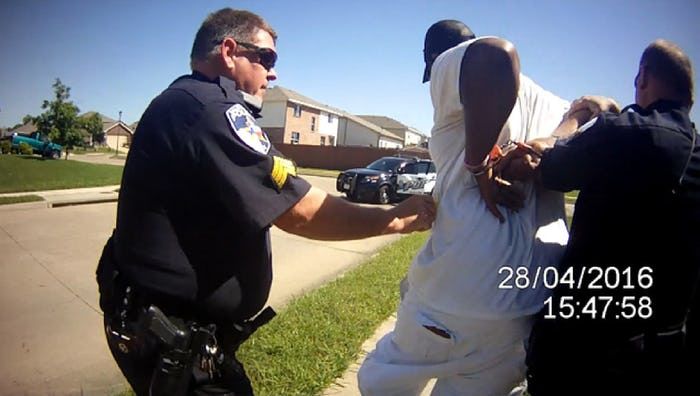 This image from a body camera video of a Balch Springs officer shows Sgt. James Young using a Taser on Marco Stephenson in 2016. Young started tasing Stephenson as Stephenson knelt on the ground with his hands on his head. Young, was investigated by the Texas Rangers but no charges were filed. Another officer who witnessed the incident asked supervisors to review the footage.
(Balch Springs Police Department)

An hour into the interrogation, the officers show Cunningham the surveillance video, which shows Cunningham and Ortega shoving each other. Cunningham admits he did push Ortega. The video also shows Ortega holding the tire tool over his head as Cunningham ducks.

Haber and Young tell Cunningham he wasn’t assaulted and say the surveillance video doesn’t back up his story.

“This is video evidence,” Young tells Cunningham, who wipes away tears. “It doesn’t lie.”

Near the end of the video, Haber slides his chair toward Cunningham and rests his hand on Cunningham’s upper arm. 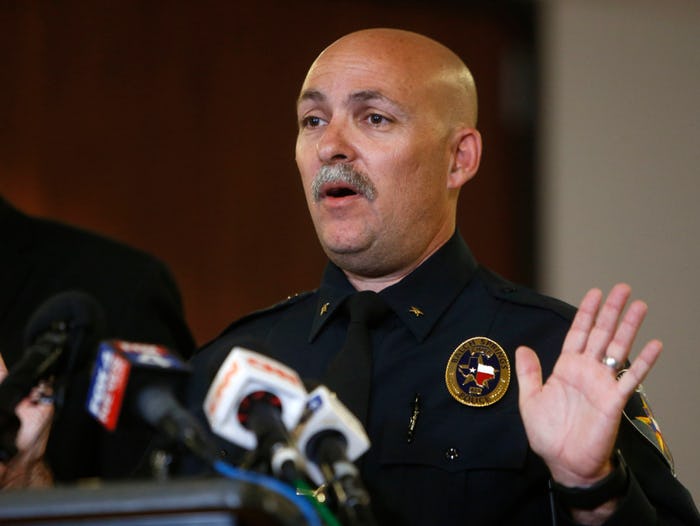 Balch Springs Police Chief Jonathan Haber spoke at a news conference in May after the shooting death of Jordan Edwards. Haber's actions from before he became police chief are the subject of a lawsuit against him and another officer, Sgt. James Young.
(Rose Baca/Staff Photographer)

"We have to protect ourselves with the truth, don't we?" Haber says after Cunningham says he goes to church every Sunday and Bible study during the week.

"That's what Jesus would do, wouldn't it?" Haber says.

"The truth shall set you free," Young adds.

"Yeah," Cunningham says as he wipes away more tears

"That's in the Bible somewhere, isn't it?" Haber says.

"I don't want you all to think that I'm a big liar," Cunningham says.

Different officers arrested him 15 days after the confrontation in the parking lot. Cops came to his house as he, his wife and two stepdaughters slept, his attorneys said.

Haber and Young said that Cunningham wrongly reported that Ortega “swung” the tire iron at him,  according to depositions, court records and the interrogation video. They also said Cunningham confessed to filing a false report.

The federal district judge overseeing the lawsuit, Sam A. Lindsay, says that isn’t what happened.

Lindsay questions the officers’ actions and disputes their opinion that what happened in the video was not assault, writing that the remarks “strain credibility.” Lindsay includes the definitions for assault and aggravated assault.

“Ortega’s actions constitute assault. Under Texas law, a person commits an assault if he or she ‘intentionally or knowingly threatens another with imminent bodily injury,’ ” the judge wrote. “If a person ‘uses or exhibits a deadly weapon during the commission of the assault,’ the offense at minimum is a felony of the second degree.”

Hope for the Rest of Us

Lindsay wrote, “Ortega’s action clearly shows that he is the aggressor. Whatever happened behind the SUV was over, and Ortega restarted the incident by threatening Cunningham with a deadly weapon.”

The judge seemed perplexed by how Haber and Young handled the interview with Cunningham.

“After the first 15 minutes of the interview, it is clear to the court that the officers appear, for whatever reason, intent on determining that Ortega was not culpable.

"Why this approach was taken against Cunningham,” Lindsay wrote, “is beyond the court’s comprehension. Moreover, the court does not understand why the officers insisted on making Cunningham out to be a liar because he used the word “swing” and “swung” to describe Ortega’s actions with the tire iron.”

In court records, the officers “assert their actions were lawful” and argue they have immunity because a “reasonable officer” would have done the same as they did.

“The judge is talking about how a jury would interpret the evidence,” he said of the judge’s opinion. “Everyone interprets the evidence differently. We don’t think that interpretation would occur.” 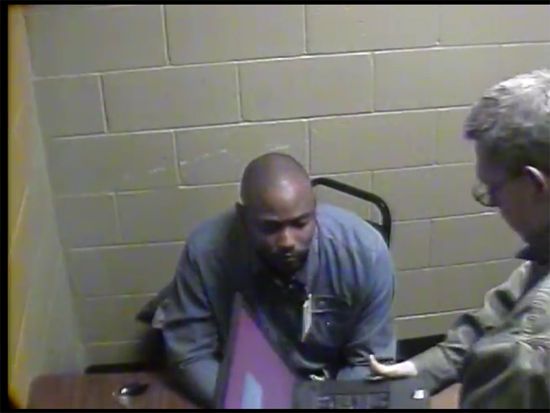 Sgt. James Young (right) brought in a laptop to show Michael Cunningham the surveillance video of what happened outside the convenience store. Young and fellow officer Haber. now the Balch Springs chief, said the video did not show an assault. A federal judge disagrees.
(Balch Springs Police Department)

Cunningham doesn’t read or write well. He’s a 1988 graduate of Hillcrest High, where he took special education classes, according to school records. He keeps the diploma in his truck.

Cunningham said the way Haber and Young treated him has strained his family. He lost his job with the city. Cunningham did temp work but didn't find a new job for more than a year. He had never been arrested before.

“My heart is heavy. I have nightmares,” Cunningham said. “My wife will ask what’s wrong, and I try to hide it. But it’s hard to hide something like that.

“I feel like my manhood’s been twisted into the ground.”

He and his lawyers said he filed his lawsuit in 2013 to ensure Balch Springs officers receive better training in all aspects of policing, including questioning victims and using deadly force.

His lawyers, Schorr and Glenn Holley, say they want Cunningham’s life “made whole.” In the lawsuit, they ask for unspecified monetary damages.

The judge has ordered both sides to try to work out an agreement.  If that fails, the case will go to trial in June 2018.

Ortega and Ed Morris, who was the Balch Springs police chief at the time, did not respond to repeated attempts to reach them. Morris is now the police chief in Whitehouse, outside of Tyler. Ortega left his job with Balch Springs in 2014 after nearly 10 years with the city.

Cunningham initially included Morris, Ortega and the city in his lawsuit, but the judge dismissed them from the case. 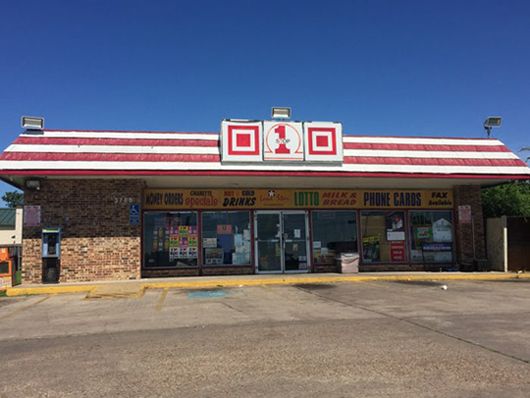 The incident involving Cunningham and a co-worker happened outside the 1 Stop Food Store in Balch Springs.

After Cunningham’s arrest, another officer in the department, Michael Rumsey, was disciplined for being “too sympathetic” toward Cunningham, the officer’s attorney, Richard Carter, said in an interview. Rumsey no longer works for Balch Springs and could not be reached for comment. He is now a Dallas city marshal.

Rumsey was reprimanded for how he handled the case, including for not reviewing the surveillance video to see the “many discrepancies” by the “alleged victim,” meaning Cunningham. Ortega was originally jailed on a charge of aggravated assault with a deadly weapon, but the case was dropped. Rumsey’s written reprimand by Morris says  “because you failed to review all evidence in  the case, a person was arrested and/or jailed unnecessarily.”

Rumsey was initially suspended for 40 hours, but that was later reduced to 32.

But in a third video, taken from Rumsey’s patrol car, Rumsey is heard off camera telling someone that Ortega admitted to police that he “went at” Cunningham with the tire tool.

Carter, a former prosecutor and Hunt County attorney, has represented thousands of police officers. But Cunningham’s case stands out from the others.

It’s the only time, Carter said, he felt compelled to alert prosecutors about a case.

Carter wrote a letter to the Dallas County district attorney’s office saying Cunningham should not be prosecuted.

“It was almost like some of the detectives didn’t think Michael Cunningham was articulate enough or didn’t say the right buzzwords,” Carter said in an interview.

“But when you get down to it, the video didn’t lie.”